Learn how to make your own cheese and win a kit! 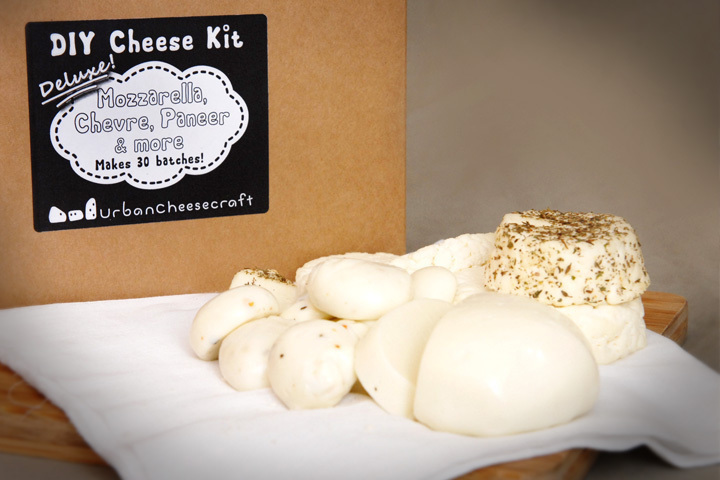 
Urban Cheesecraft is an Etsy company run by Claudia Lucero straight from Portland, Oregon - a city famous for its DIY ethic. Urban Cheesecraft is based on one simple philosophy: that fresh cheese should be easy and affordable to make at home. For thousands of years people have made cheese at home using simple recipes, so Claudia created her DIY Cheese Kits - we discuss how she started up her company and the peaceful experience of creating your own cheese in the comfort of your own home. 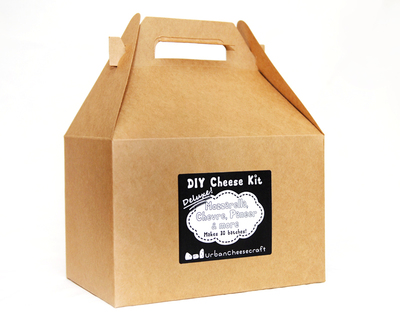 Want to win your own mozzarella-making kit? Scroll down to the bottom and leave a comment with the cheesiest joke you know!

Congratulations to Zombunny with the joke:

“ What kind of computer knows how to sing? A Dell! ”

What first got you started making your own cheese? Did it take you a long time to refine the process?
I was first and foremost a cook and crafter in general. I value DIY ethics and traditional skills. My grandmother was a great cook and since I can remember, she let me be a big part of cooking big meals. To me, homemade, from scratch food just equals love and health. Most recently, the inspiration came from needing to preserve veggies that I received from a farm share. I looked for pickling and sauerkraut recipes so that I could preserve cabbage, beets, squash and green beans and that led me to preservation of all sorts including cheese. I looked at recipes for aged cheeses and although I find it fascinating and a great hobby still, the cheeses that I could see myself making a regular part of my life were fresh cheeses like mozzarella and paneer.

How have you tried to spread the word about home-made cheese?
It was easy because all I did was live it and share it. It took off from there into the kit business, my blog, and classes. Other people were as hungry for forgotten skills as I was/am. 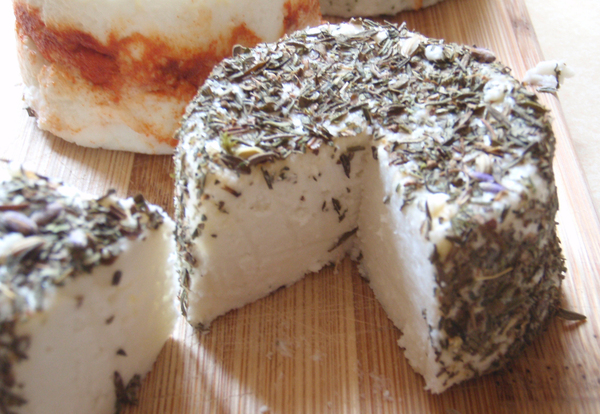 Who benefits from making cheese at home as opposed to the supermarkets?
Anyone who enjoys all-natural, fresh cheese but especially anyone who wants to know and control what they eat. Whether raw, organic, grass-fed, whole fat, no additives, vegetarian etc. is the concern, you can choose that when you make your own cheese. You get to see what goes in because you put it in. The bonus is you can customize flavors you cannot find in stores...rosemary fig chevre, jalapeno mozzarella, dark chocolate lemon ricotta...the possibilities are endless and very fun to play with.

What would be the best kit for starters, or for anyone with children?
I think ricotta is wonderful because you can have it sweet or salty and you can cook many favorites like pizza or cheesecake with it. Uses are as simple as ricotta with honey over pancakes and fruit- beloved by anyone who tries it. Alternately, a ricotta dip made with fresh chopped herbs and sea salt is wonderful for raw veggies or crackers. It's an easy way to start making cheese but also getting a taste for what mild, fresh, old fashioned cheese tastes like. Younger people have not grown up with these mild cheeses unless they are still a cultural part of their lives. As a Mexican-American with a grandma who liked home-cooking, I was raised with wonderful fresh cheeses like Panela, and Queso Oaxaca but my nieces have not, until recently of course! :) Now they make their own cheese too!

Are all of your kits suitable for vegetarians?
Yes, the rennet is vegetarian so everyone can enjoy the kits.

In a featured Etsy video on Urban CheeseCraft, you said that cheese-making rekindled your love of science. Do you think it’s more of a science or art form?
Absolutely and inseparably a combination of both. That's why I get such an eclectic combination of students in my classes. I love it.

What other types of craft have you experimented with in the past?
Everything you can imagine since my earliest memories, from crochet to candle-making to book-binding and that's not even in the kitchen. I have also worked with children for many years so that always inspired new low-budget ideas that I tried...string and stick dolls, paper scrolls, flower "ink" painting...currently, I have a burning desire to sew little vests for my chihuahua as well as skirts for myself. In the kitchen, I want to work on preserving more without the use of electricity as well as aging cheeses for years, making fruit cordials, flower wines etc. It's endless. I have been gardening with the goal of growing and preserving my food but completely living off this food is a craft I am humbled by so far. It does get better every year though!

Eating cheese creates serotonin and can ward off depression, but can the process of making cheese also be relaxing?
Absolutely, it is no accident that making cheese is something that monks have done over the centuries, much like traditional fermented breads that have to be risen several times and require a lot of kneading, it gives a lot of time for reflection and challenges one's patience...it pays off though. It's quite zen. I think there must also be a spike in serotonin when you see milk coagulate successfully and see your finished cheese, it's very exciting! 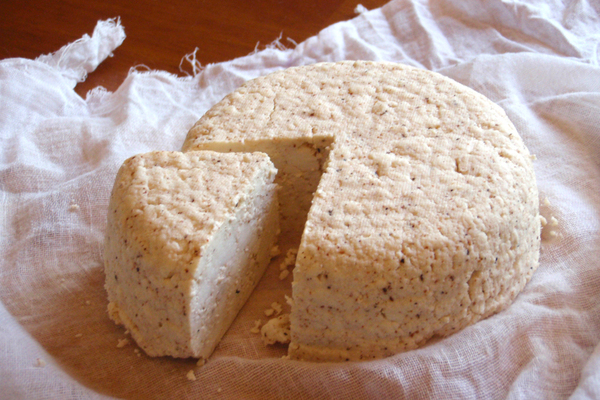 Your products are already sold on Etsy and in several places in Portland, Oregon and beyond. Would you like to see other companies being set up to promote local produce in their own cities?
Indeed. The more people can strengthen their community and local economy, the happier they are. I see this in Portland all the time.

You’ve been featured in Home Dairy, and the Food Lover’s Guide to Portland as well as many websites. Where would you like to be seen next, and where would you like to take your company in the future?
Hmm, good question, this is where that business plan comes in handy right? I haven't gotten around to that yet. The kits have a life of their own, I'm happy to let them go in the same fashion for a while but what I would love is to have a fully sponsored tour of several countries so that I can learn to make lesser-known humble cheeses the traditional ways. I would be happy to be a keeper of traditional skills and pass them on to the younger generations in any way I can. We have lost too many skills already and there are lots of people trying to re-learn but we need to hurry and talk to the people who learned these things 50, 75, 100 years ago if possible!

Find out more about making your own cheese or pick up a kit from UrbanCheesecraft.com »

xxxKittycorexxx
“How much does a hipster weigh?
.....
An instagram!!!

XD AHAHAHA I love this sooooo much. LOL Thats for all you hipsters out there! ;D” 11th December 2012

Krista B.
“I get fresh parmigiana from my big toe daily.” 6th December 2012

Kelpietears
“Q: if a rooster lays a egg on the top of crook roof that's slanted on both sides and the winds blowing from the north,what way would it roll?

SugarNSpiceLily
“I got noticed for having this CHEESY (but funny) statement in my twitter bio:

"I always feel sad for seedless watermelons, because what if they wanted babies?"

I blogged about it here. You can find a link to the person's article in there as well.

Kt Bing
“A man walks into the doctor's office with a piece of celery up his nose and a carrot in his ear. The doctor takes one look at him and says,

Kristi H.
“One of my faves is the nacho cheese joke, already told by kitty, so here's another:

A piece of string goes into a bar and orders a drink. The bartender says "Sorry, we don't serve your kind here." The string walks back outside, ties himself in a knot and ruffles up his hair. He walks back into the bar, and the bartender looks at him suspiciously and asks, "Hey, aren't you a string?" to which he answers, "No, I'm a frayed not."” 21st October 2012

Where do horses go when they are sick?

mary.e.south
“What dance to they do at the Cheesemakers Halloween Ball?

SpiderBaby
“ Q: What dance do cheese makers do every Halloween?
A: The Munster mash!

yvonne.wilken
“Why did the frog cross the road?
Because he was stapled to the chickens foot.” 18th October 2012

Enc.Melvin
“Did you hear about the big fire at the cheese factory? Yeah, all that is left is de brie. ” 16th October 2012

jojobeandesigns
“ What cheese should you use to hide a horse? Mascarpone.

Melissa D.
“What cheese is the most religious? Swiss, because it is holey.” 1st October 2012

Marcia S.
“I don't think this exciting article about cheese making needs a cheesy joke because
the article makes you want to make cheese immediately! Having said that here goes my cheesy joke....Why did the chicken cross the road? To get to the other side!” 25th September 2012

Marcia S.
“This article can't help but get you excited about cheese making!....I don't think a cheesy joke does it justice but here goes...Why did the chicken cross the road?
To get to the other side!
Marcia” 25th September 2012

Rachel B.
“What did the melted cheese say to the unlucky tortilla... Man, it's NACHO day!

Katzchyn V.
“What is a lion's favorite cheese?

isobel.l
“me and my mum love this joke and its the chessest one i know.

why did the toilet paper go down the hill?
because it wanted to get to the bottom!!!!
” 15th September 2012

Jasmine T.
“So there are two fish in a tank. One looks at the other and says, "Do you know how to drive this thing?"” 15th September 2012

wetkisses
“What's black white and red all over?
A polar bear with a sun burn.” 15th September 2012

floragami
“Q: What was the last thing the fly saw when he hit the windshield of a car?
A: His butt.
” 14th September 2012

Lisa T.
“ Q: What happened after an explosion at a French cheese factory? A: All that was left was de brie.

Shay W.
“Why did the tomato blush?
~~Because it forgot the salad dressing.” 14th September 2012

Rita F.
“This one is from my daughter when she was 5 years old...

"Why do cows wear bells?"

Zombunny
“What kind of computer knows how to sing? A Dell!” 14th September 2012

harmonardus
“What's red and white on the outside and grey on the inside?

Anemoon S.
“Why would you take a huge chunk of cheese to the office?

Lauren O.
“Two atoms are walking down the street.

Says one atom to the other, "Hey! I think I lost an electron!"

amelia s.
“I asked my husband for his funniest joke:

Sydney W.
“Why did the tomato blush?
Because it saw the salad dressing!” 14th September 2012

Because 7 ate 9!!!
First time I heard this one was in kindergarten

TNTish
“What do you call a cheese that is sad?

Princess Pam-attitude
“Here's the cheesiest geek joke I know, (gets me every time!)

A star walks into a black hole, but doesn't seem phased.
The black hole turns to the star and says...
"Sir, I don't think you understand the gravity of the situation."
” 10th September 2012

Angelshimmery
“What Welsh cheese must you always eat with caution?
Caerphilly
” 10th September 2012

Britta J.
“Which cheese would you use to disguise an equine? Mascarpone!” 8th September 2012

Lotusburger
“What type of cheese is made backwards?

Kitty
“What do you call cheese that isn't yours? NACHO CHEESE!!
” 8th September 2012