Win a copy of the geekiest knitting book ever! 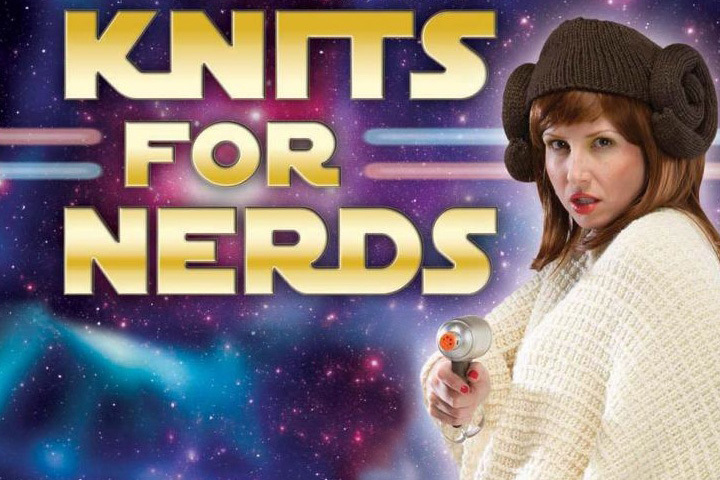 
Joan of Dark a.k.a Toni Carr is back with a new book Knits for Nerds, which is filled with knitting patterns that every science fiction, comic book and fantasy fan will love. We've got three copies of the book up for grabs along with two sample projects including Dr. Horrible’s Sing-Along Blog Gloves and a Firefly Scarf. 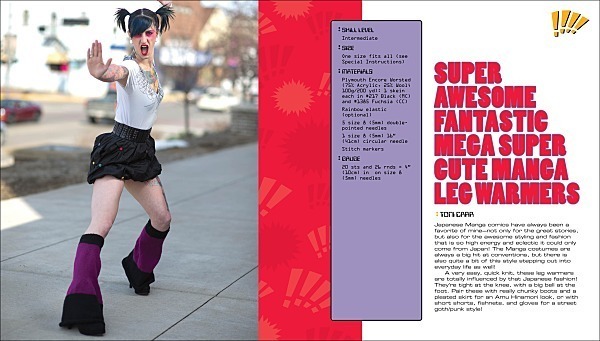 Win a copy of the book: 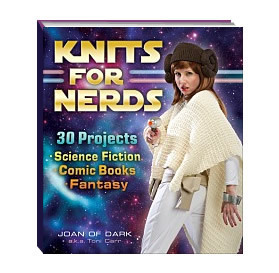 We've got three copies of the book up for grabs and for your chance of winning, simply leave a comment below telling us what nerdy or geeky thing you'd love to knit?

Frocktopus
“I've dreamed for years of knitting a big blue coat or cardigan covered in an accurate map of the solar system, with a stitched map sign saying "you are here" pointing to planet earth. I haven't had the time or patience to make it yet but might have to get my nan involved, bless her.x” 10th December 2012

Lys C.
“A cute Yoda hat for my baby nephew, and a Cthulhu beanie for her mum. Green green nerdy family!” 24th October 2012

Jordan B.
“I would love to knit a Link costume from the Legend of Zelda series. Yes, his entire outfit, from tunic to boots to his hair. Then, I would put on makeup to give myself a doll like appearance, so I would be like a ragdoll hero of time. Being a small female, I would then find a much larger person to dress up as Ganon (in an equally large sized set of footie pajamas) and then carry me around. Who says the Prince of Darkness doesn't also enjoy sleeping with a small stuffed Link?” 20th October 2012

lindarumsey
“I'd love to knit any of the Star Wars characters, but especially Han Solo. So far I've only knit a Tie-Fighter cushion cover.” 17th October 2012

Mitzzi
“Knit any geeky thing you say...umm how about a Superman onesie! OMG yep soo want that! I'd wear it everywhere, under my clothes, uniform, swimwear, in the shower...umm too far? But whenever I do wear it, I'd just feel absolutely super anywhere I go.” 8th October 2012

FreyaShawk
“I would definitatly be knitting up the entire cast of Dr who!!!” 7th October 2012

jojobeandesigns
“I need yoda ears for my little man

Mitzzi
“Knit any geeky thing you say… um how a bout a superman onesie! OMG yep soo gonna do that. I’d wear it everywhere, under my clothes, uniform, swimwear, in the shower…umm too far? but whenever I do wear it I’d just feel absolutely super anywhere I go.” 4th October 2012

Mitzzi
“Knit any geeky thing you say… um how a bout a superman onesie! OMG yep soo gonna do that. I’d wear it everywhere, under my clothes, uniform, swimwear, in the shower…umm too far? But whenever I do wear it I’d just feel absolutely super anywhere I go.” 1st October 2012

Alisonoentoro
“Even though i can't knit at all (but i would loved to) are a few scarves for the winter time especially when the fall/winter are coming very soon and a cute hat for Toni Carr! i adore Toni Carr's book! i loved it :3 GAHH” 29th September 2012

ThatBrunetteChick
“My MIL is a champion knitter and a nerd. She wrote a letter to the network to keep Star Trek on the air! The original Star Trek. We're a little to old to wear the Uhura mini dress but, the LOTR shurg sounds cute. This book would make a great companion to the Christmas gift of Firefly. Win-Win!” 28th September 2012

MOOcowZrule!
“I would totally knit a lightsaber and Hermione's beaded bag!” 27th September 2012

Marcia S.
“I would love to make a Godzilla head in a variety of green, textured yarns
with a wire armature frame to knit over. I would put in glass eyes and hang it
on the wall.” 25th September 2012

Laurinda P.
“My adult son just introduced me to Dr Horrible's Sing-Along Blog, so I would love to make Penny's gloves for his girlfriend!” 23rd September 2012

MartinaNoor
“I would love to have a collection of homemade amigurumi aliens (I already have one) and also want amigurumi cthulhu.
I would love to knitt tank girl socks and the manga leg warmers.” 20th September 2012

Tracey N.
“I have just become a Great Aunt,my first&of course the first of any of my sister's&yes I am speaking of my only daughter when I address this issue. But anyways I truly find it awesome she being the first it is only befitting for her to experience motherhood first,not to mention I am entirely to young to be a grandmoms. Anyways the geekiest&dorky item I would like to knit would definitely be a whoobie for Baby James Riley which I have my own nickname which is Baby Bagel,long story will one day explain it. If I could possibly win this book I am pretty sure I will be able to complete his whoobie because the women who made all the kids in the family has passed away&would love if I could be the one to knit his whoobie&save the day. Trust&beliebe I am k own for beo g the irresponsible Aunt&mother. Ur my daughter graduated from Cabrini receiving one of Cabrini's highest honors Cum Lade w/a GPA 98.9. & I am the cool Aunt who slept out my one daughter, my nieces nephews&all of them with @least a couple friend on Broad&Vine just to get the good seats then bring all of them to the concerts, never hurting or losing any of them but I still get no respect cause I am easygoing &could care less what anybody else's think as long as the kids/young adults are having fun.good enough for me. But just this once I'd love for them to see I am capable of responsibilities, but unlike that means to most people which seems to make people haters I don't understand cause it will make me feel so proud to continue this family tradition cause the tradition rocks but to also thank-Our Beautiful Aunt Ag for starting such a wonderful tradition for our family no matter the pressure,strain,cost,time away from family, Aung Ag you always had family pride&hopefully I can continue it in your honor

HotPinkCrayola
“I would amigurumify every Buffy the Vampire Slayer character ever. That may be my new project. Long term of course! ” 17th September 2012

Linda K.
“I just love to knit the outfit on the cover, for i am a huge star wars fan and i am giong to a sci-fi comic festival soon and i sure whant to show of that awesome outfit!!. Greets Linda K” 16th September 2012

kayla i.
“I love the horrible gloves and all my friends would too! we will be nerdy and warm, but i dont like Hermione's bag, and something skyrim for me and my boyfriend

music_gurl71
“I will have to make the manga legwarmers for my little sister, but I would make Hermione's bag for my self!” 15th September 2012

Lea V.
“I had the pleasure of meeting Joan of Dark at GenCon in Indianapolis, IN this summer and taking one of her knitting classes - it was a lot of fun!” 15th September 2012

wetkisses
“I would love to knit the 4th Doctor's scarf from Doctor Who. I've always wanted to do it and it's on my list for this winter. ” 15th September 2012

thefunkylama
“Well, I would make the Doctors or Captain Malcolms coat. It would be awesome. Then I would make River Tam's sweater from serenity and everything would be warm and wonderful. ” 14th September 2012

floragami
“I'd like to make some hair bows, like the kind the cute anime and manga characters wear. ” 14th September 2012

Christal
“I have a friend who is a major Star Wars fan, (like, almost unhealthy, but whatever) and I think she would hurt me if she knew that knew of the existence of that princess Leia hat and hadn't made it for her yet.” 14th September 2012

Shay W.
“I would love to be able to knit the Firefly scarf to go with my steam punk costume.” 14th September 2012

Mia K.
“I've already made several Daleks, an Adipose and a few other Who related items and want to make a pair of gloves like Penny's from Dr. Horrible and Serenity from Firefly. I absolutely love the Aim to Misbehave jacket and Mr. Nancy's hat in Knits for Nerds. ” 14th September 2012

Carole C.
“I need to knit Hermione's bag for myself, the Tank Girl leg warmers for one daughter, Jayne's scarf for the spousal unit and several other bits and pieces for other family members. Are you kidding? This is the world's most perfect knitting book! I've already checked it out from the library twice!” 14th September 2012

MandaMewMew
“I would knit the scarf from firefly and the super manga leg warmers and pretend to be River and kick some reavers bootahs!!!! KICK ALL THE REAVERS!!!” 14th September 2012

Kat
“Im a huge Firefly fan so I would be making one of them as soon as humanly possible!! What a cool book, thanks for this great giveaway!” 14th September 2012

Nichola S.
“I crocheted a hobbit a while ago! His curly hair was the best! I'd LOVE to do a crocheted/knitted Smaug or Balrog!” 14th September 2012

Anna M.
“I think you just solved everything for my Christmas gift list!” 14th September 2012

miss.elle.baker
“Oh the many geekilicious and nerdy things I dream of knitting, things like a cthulhu beanie, a TARDIS tea cosy and a ram horn helmet for the skyrim gamer nerd. In regards to this book I'd probably make everything from front cover to back then back through again making a variant on each.

SilverM0on
“i would love to knit dr-who scarf and learn how to make a daleks amigurumi it would make my day.. this book seems very interesting id love to see all the nerdy knit in there lol” 8th September 2012

Olivia H.
“I would absolutely love to knit my own Hogwarts robe from Harry Potter! It would be a cute and geeky way to stay warm during the winter. ” 8th September 2012

kaoticgirl
“I would absolutely knit a costume for myself and my son to wear to next year's Dragon*Con. I have been twice but haven't taken my son yet, he'll be 9 for his first trip next year. Exposing the boy to all things nerdy at a young age has paid off, he loves Star Wars as much as i do. I know there's gonna be some Star Wars goodness in that book from the cover so that's tops. But I gotta tell you, I nearly had a heart attack when I read that there's a pattern in there for Tank Girl socks- Tank Girl has been my hero (heroine?) since i was a tween. I am gonna knit the crap out of some Tank Girl socks and then I am going to wear then until they fall apart and then I'm gonna knit them again.” 8th September 2012

Stephanie T.
“I would love to knit a costume for comicon maybe starwars themed or super hero themed. It would be way cheeper then buyng a costume and you get the added satisfaction that you made what you wore that day