What I Wore Today

We chat to Poppy Dinsey, creator of the outfit-sharing sensation, What I Wore Today! 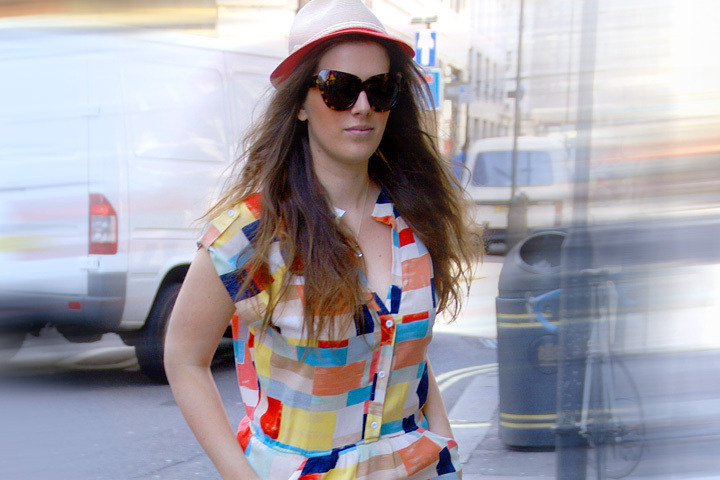 
When Poppy Dinsey set herself the new year's resolution to photograph and blog each of her outfits every day for an entire year, she had never imagined the idea would become a global sensation. Today, WIWT has taken over the internet, inspiring fashionistas around the globe to flock to the site and share their own looks on a daily basis. Impress and inspired, we couldn't wait to sit down with Poppy and find out how she turned a simple idea in to a social-network and blogging sensation. 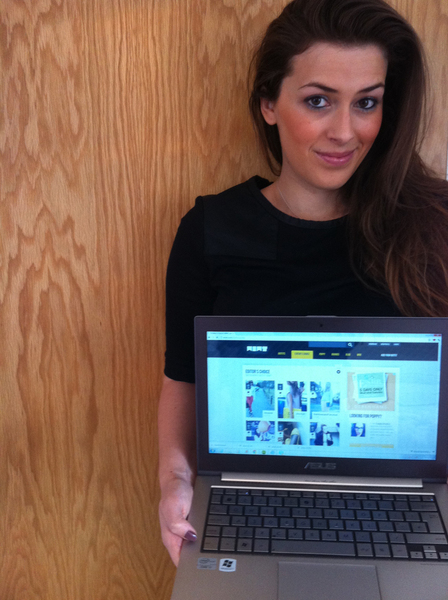 How did WIWT get started?
Nobody seems to believe me when I say I started the original WIWT blog as a bit of fun, but I really did. It was a New Year’s Resolution which I dreamt up on Laguna Beach on the 31st of December 2009. I wanted to come up with a challenge that was easier than “bothering to diet” or “bothering to exercise” but I was running out of time to think of something, I wanted something easy so I came up with the idea to wear and photograph a different outfit for each day of 2010. I partly liked this idea because I knew my friends back in England were stuck inside in miserable cold weather and I wanted to show off that I was on the beach in January. It was all about showing off, basically. And about learning not to say ‘I’ve got nothing to wear’ so much, of course.

How was the initial reaction?
The initial reaction from 99% of people was “let’s see if you’re still bothering to do this in two weeks time”, it was that reaction that spurred me on. EVERYONE thought I’d get bored of it and give up, I did as well to be honest, but luckily my determination to prove everybody wrong was more powerful than my intrinsic laziness. I never imagined it would make money let alone become the global site it is today. When I log on each morning and see girls posting from Melbourne, Singapore, Dubai and so on and so on I just find it hilarious. I’ll still ring up my Mum sometimes just to say, “have you see there’s a guy in Morocco posting outfits?”. It’s bizarre.

"I wanted girls in Primark to be able to proudly show off their high street bargains, without the need of a professional photographer."

How did the blog transform in to a community?
I launched the social network version of the site in late September 2011, nearly two years after starting the original blog. Within a few months of starting the original WIWT blog people were emailing me pictures of their outfits and asking to be featured. I realised the potential of the idea and whilst I was well aware that outfit sharing social networks already existed, there was definitely a gap for the kind of style sharing site that WIWT became. I only wanted to go down the community route if I could ensure it was a non-snobby non-bitchy place to post. I wanted girls in Primark to be able to proudly show off their high street bargains, without the need of a professional photographer on hand and the latest edition of Photoshop to touch up the photos. I wanted it to be a fun community that loved fashion but didn’t think it was the be all and end all, normal guys and girls who can have a laugh. And it is!

Did you have a background in fashion or technology?
I have no background in fashion whatsoever – apart from the usual interest in shopping and magazines. I didn’t have a single contact in the industry…and to be honest I still consider myself to work in tech rather than in fashion. I had worked in a number of tech start-ups in London before I started WIWT. I gained a lot of experience that was invaluable for launching the site, it would have been impossible without the professional background I had. I’m very lucky that I gained a lot of responsibility at a young age, if I hadn’t had such great bosses I wouldn’t have had the skills (let alone the confidence!) to start a company of my own. 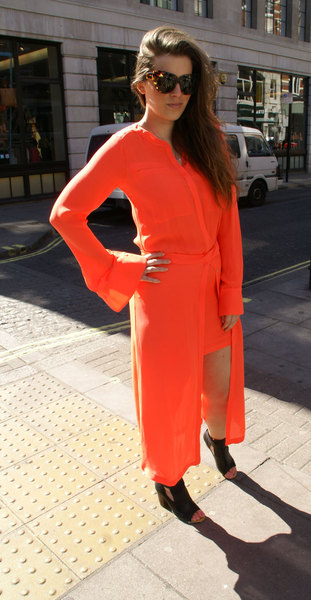 Is it a dream job and what's a typical day like for you?
It has it's ups and downs! Some of the perks are unbelievable. Take next week for example, I’ll be eating at Michelin starred restaurants under the guise of “meetings”, flying to Milan for a party and holding a two day charity event at our offices to raise money for The British Heart Foundation. But I’ll also be doing mind numbingly boring VAT return admin, recruitment nonsense (that I despise) and probably crying at least once on the tube because I’ve tried to cram too many meetings in to one 12 hour day. No two days are the same though and that’s what makes it a dream job really, there’s no time to be bored or get used to anything as there’s always something exciting around the corner. Some days I wish I stacked shelves in Tesco just because my brain aches from all the thinking and planning and decision making, but I haven’t handed in an application to any local supermarkets yet!

What would you be doing if you weren't running the site?
I’d be working in tech I guess, probably in biz dev or product marketing somewhere fun and disruptive. That’s what I was doing before and I was certainly very happy doing that, it’s just that the WIWT opportunity came along at the right time. If I hadn’t started working in tech whilst at uni, I would have definitely gone into one of the banking grad schemes…or at least tried my hardest to. And then I’ve always wanted to do creative writing – screenplays or novels. I’m quite lucky to have a business/analytical brain *and* a creative brain. Really lucky actually. I’d like to work in a corporate bank and write a film before I die.

Where are your favourite places to shop and who are your favourite designers?
Shopping’s a real pain in the arse isn’t it? It’s a miracle to leave a shopping centre without a migraine these days. I’m pretty much happy shopping anywhere as long as it’s not crowded and mental. I’m a 10am or 9pm on a weekday gal, that’s the only time shopping doesn’t break me. I like the usual high street chains – H&M, New Look, Primark, Topshop, Miss Selfridge, Mango, Zara. It’s all about how you put an outfit together rather than the price tag, the high street is seriously stylish in the UK, we’re very lucky. Cheap, fast fashion is is better in the UK than anywhere else I’ve shopped. Whether that’s a good thing or not is debatable! Designer-wise my faves are Ashish, David Koma, Christopher Kane, Holly Futon, Kinder Aggugini and, of course, Burberry. 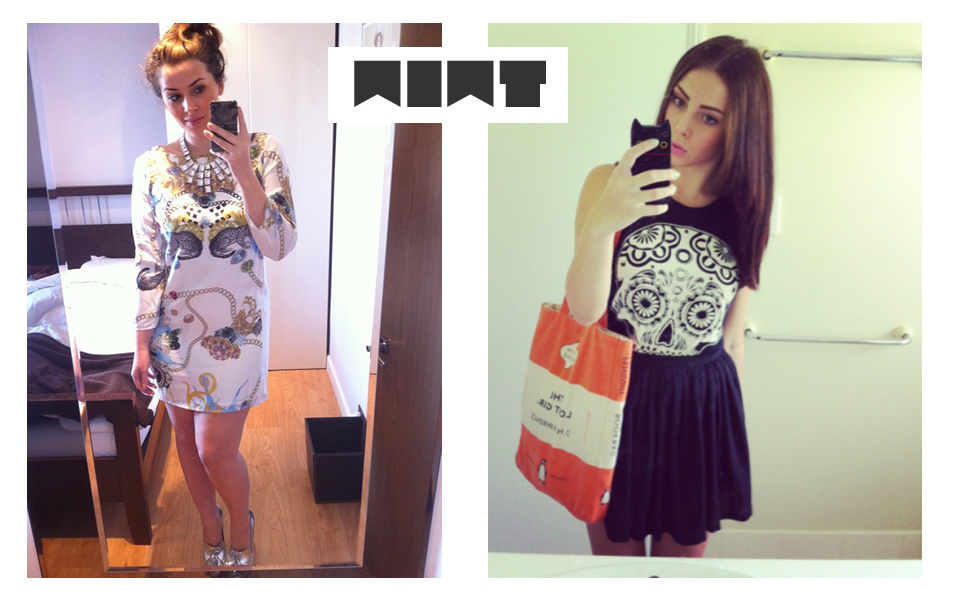 What is the favorite outfit you've posted and also one another members has posted?
That’s really hard, I love so many of my outfits. I generally only wear clothes I really, really love. This outfit was a recent favourite, the dress was Tibi and it was hired from Wish Want Wear. My shoes are from Topshop.

We have some unbelievably stylish people on WIWT but one of my fave users is Buckteef, she puts together the most dreamy outfits. They’re pretty yet she somehow always seems a little feisty too. This one if a definite fave of hers but she’s always dressed incredibly.

Which gadgets couldn't you live without?
The usual – iPhone and laptop. I have an Asus Ultrabook that’s mega skinny so I can carry it around everywhere. It seems to have replaced my iPad. And I couldn’t live without a lit magnification mirror, those things are vital for eyebrow maintenance! 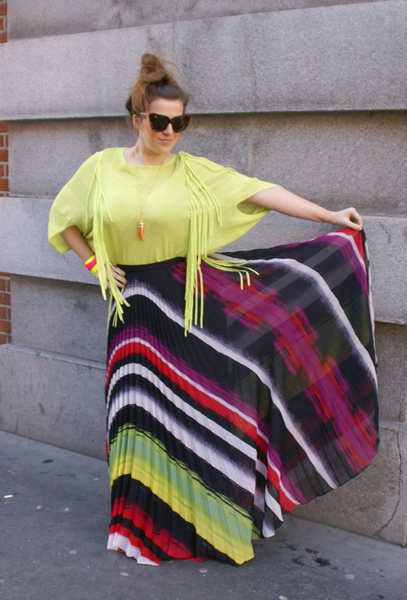 Which other websites do you love?
I’m an awful one for reading trash online, I’m always on the tabloid sites. I don’t read a lot of blogs to be perfectly honest, I’m more into the newspaper websites. The Times, The Guardian, The FT…then of course The Sun and The Mail Online for ‘entertainment’. I spend a lot of time on Wikipedia too just filling my brain with useless knowledge, desperate for it to be called upon one day in a pub quiz.

What tips would you give to someone wanting to start a blog?
Write about something you care about, write consistently (that refers to tone, style, length, frequency of posts etc) and just keep going with it. Even if nobody ever reads it you’ll hopefully be improving your writing skills and picking up some HTML knowledge along the way. I worry thought that people think blogs are the answer, they’re really not. There’s still a place for ‘real journalists’, even if the ‘real journalists’ now also blog. To be honest, I don’t even know what blog really means any more.

What's next for you and WIWT?
My general hopes and dreams are to just be healthy and happy, usual shtick I suppose! I want WIWT to continue to grow in popularity in the UK and abroad. I want people to be uploading their outfits the same way they would go onto FB or Twitter to update their status. I’d love for it to be a normal part of people’s online life. Everyone seems to tweet what they’re eating or watching on telly, why not show off what you’re wearing too?

You can find out more about Poppy and share your own outfits at WIWT.com »