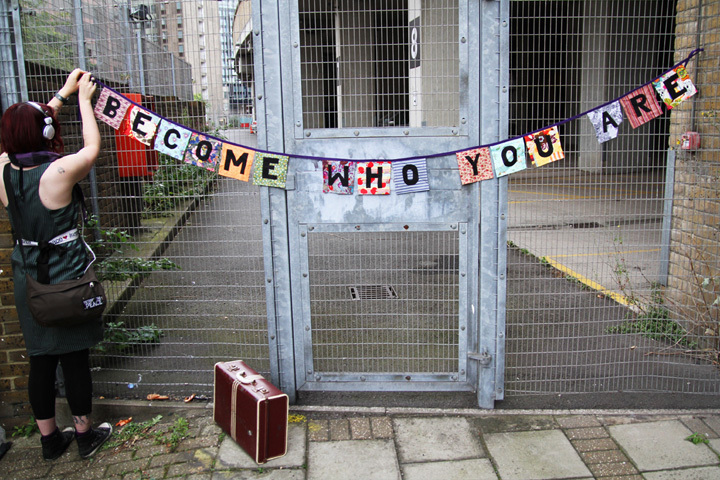 
Have you ever felt frustrated by how hard it is to get people’s attention for a good cause? Started to talk to someone about human rights or the environment and watched their eyes glaze over? If you’re interested in passing on your passion while doing more crafting, check out some of the Craftivist work being made around the world. 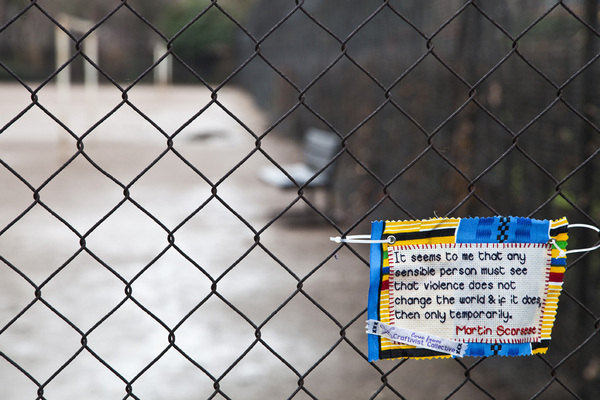 On the streets of London this Valentines Day, little red envelopes began to pop up. They could be found perched in hedges, propped up in red phone boxes, and balanced in between signs. Inside each of them was a letter and a handmade Tatty Devine designed key ring, a gift from the Craftivist Collective, a group who use craftivism to create conservations about social topics. Instead of devoting Valentines to buying new stuff or just dreading the whole day away, we work to hijack it for a simple purpose: asking people to think about what they do for their community and environment: not to ignore their global neighbours. And give them a little present to say thanks.

So what is craftivism, and how does it lead to “craft bombing” in busy cities?
Craftivism is the combination of craft and activism. It was coined by artist Betsy Greer, a maker of wonderful things who was looking for a way to start “using what you can to express your feelings outward in a visual manner without yelling or placard-waving”. In the UK, Sarah Corbett founded the Craftivist Collective to start creating things that provoke public conversations about social justice. Collective member Rosa Martyn summed it up neatly with the line, ‘a spoonful of craft makes the social justice go down.’ 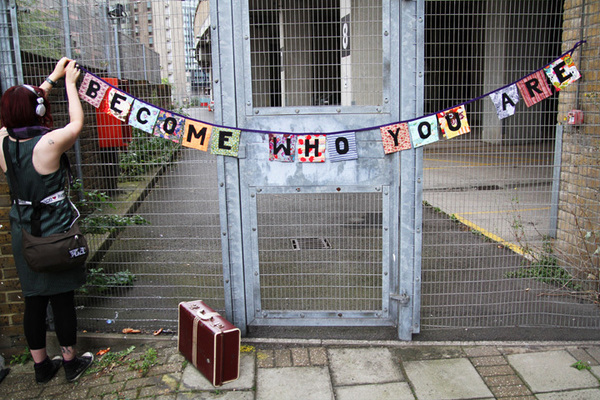 Handcrafts and politics seem like an unlikely combination, but a lot of the practical ideas found in DIY, like re-using and re-creating, passing on ideas by hand, making communities, acting locally – can be applied more widely. It can also be a lot of fun.

Being enough of a geek to be willing to stand up for something can be tough. It’s tricky to pass on your enthusiasm. Maybe you’re looking for inspiration for what to do with your craft, and it’s less important whether or not it’s perfectly made and more about what it means. Craftivism offers other ways to engage people and make new connections. It’s a way to do politics without getting bored or being boring, and it’s a way to make things that can connect with other people.

Here are some ideas to get started: 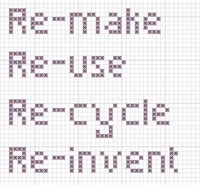 These are two quick cross stitch patterns that you could start off with. Next time you see something on the news that makes you angry, remember that can make something awesome in response. Then please share it with your friends, family, and the online craftivist community.

Margo X.
“Felt - how cool, I've never worked with it myself, but I understand it's quite durable and might work well in an outside setting. Maybe tie felt leaves to a lamp post to draw attention to the lack of trees in an area? Use it as a way to cover up gratuitous advertising logos? Find spaces in walls and doors that can be filled with felt? ” 8th October 2012

koalala o.
“I was just asking a friend today if she had any guerilla art ideas for colored felt. Any suggestions?” 8th October 2012