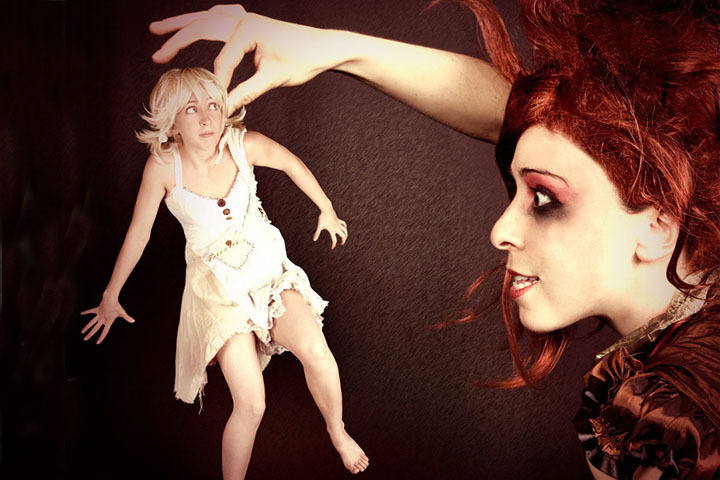 
Who are the Paper Doll Militia?
We're the Paper Doll Militia, an aerial theatre company from San Francisco. This Twisted Tale is our newest full length aerial theatre show based on the story of an uncommon friendship- it tells of trust and breaking things and stars a little girl named Chloe and the Devil incarnate, who, of course is played by a woman. The show is about good and evil, risk, and growing up. 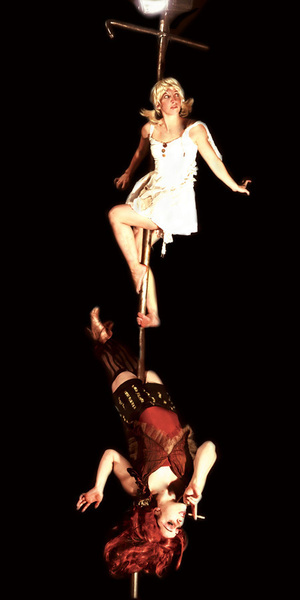 How did you get started?
We often answer this question with the brief phrase "existential crisis" the extended version would be that both of us got to a point where the way we were creating and searching for truth was no longer working. Sarah was fatigued by the academic life- the endless inquiry of the philosopher, and Rain's work in the circus left her still looking for a meaning and a story- we came together to find truth in highly physical expression of human emotion and the human struggle- and somehow Aerial Theatre saved us both.

How do you train yourself and have there been any serious injuries?
Most of the time we train by doing it. Through choreography creation and play we stay in good shape, and we supplement this with exercises to stay body balanced- some of our moves in our show we do only on one side of our body so in rehearsal we have to train the other side to avoid becoming crooked. We also both have a regular yoga practice.

What was the inspiration behind The Twisted Tale?
While writing the show we were on tour with a London production of Peter Pan. We did eight shows a week in a 1300 seat pavilion circus tent and we cannot lie when we say most of the script was written in that dressing room and that somehow a bit of Neverland seeped in. It appears mostly in our negative portrayal of growing up, of giving up, of forgetting to dream.

Where do you look for inspiration and who are your influences?
We both spend a lot of time listening. Inspiration and ideas come from books, music, other performance artists, a color. We are certainly intrigued by the work of James Thierree, Achram's Razor, and old work by Tim Burton.

How would you describe your style?
Refined and magical, dark and quirky- in visuals, costume, design and movement quality.

Do you make your own clothes and props for your shows?
Yes, we are very Do-it-yourself. We believe in creating our own work from the ground up and when we are not making it ourselves we draw on the rich community of artists we are surrounded with. We like to support and be supported by the artistic community. We also emphasize re-purposed and recycled materials. Much of the material used in our show came from the East Bay Center for Creative Re-use.

How was the Edinburgh Festival?
Honostly, overstimulating. It's a marvelous festival and we found ourselves wearing too many hats to take it all in. Being the producers, actors, acrobats, choreographers, costume and set designers, as well as eager art seekers, we found it difficult to mend and clean costumes after each show, have production meetings and see everything we wanted to see. 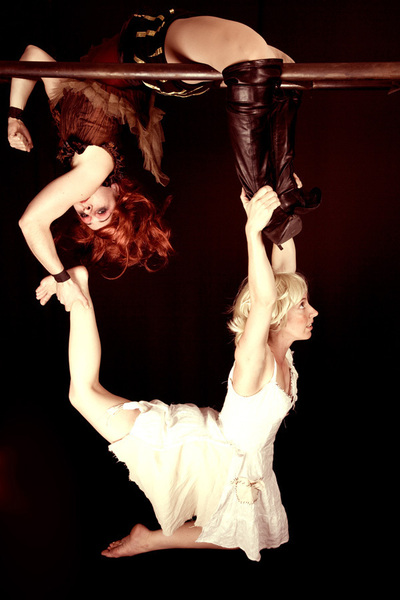 Tell us about some of the other performances you've both been involved in?
We've very much been focusing on producing our own work for the past few years and have now produced two full length shows, two variety shows called Tin Can Caberet, and numerous short pieces all of which highlight our aesthetic and our interest in invented aerial apparatus.

Rain - your website mentions you have a degree in Performance for Social Change, can you tell us about this?
I went to a liberal arts college and started out as a musical theatre major. About a year into my degree I realized that I wanted my path to be different than becoming just another actor who lives in New York City and auditions for random parts that may or may not have meaning for me, just to try to "make it". I wanted to be a performance artist who creates my own work which carries messages that are close to my heart. I decided to design my own major which included a variety of subjects, some in the performing arts, and some in the political science, psychology, and sociology departments. If I was going to create art about the world, I had to learn about the world, and college is the place to do it. My major was "Performance for Social Change" not "Political change" because I realized that my passion lies in the everyday changes we make in ourselves and how we interact with the world around us, this to me is a very strong way that art can effect change in the world. 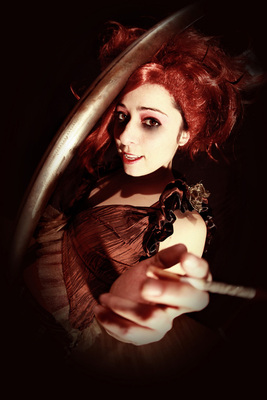 Sarah - you have a degree in Literature. Which books inspire you?
It's true I have a degree in Literature and read Woolf, Tolstoy, Dostoyevsky, Milton, and more. But now I'm very much into picture books. There's this incredible book called The Three Incestuous Sisters by Audrey Niffenegger with lovely pictures and sparse on words- absolutely lovely!

Any tips for someone wanting to get in to aeriel arts?
Take a class! There are a growing number of studios all over. It's never too late and it's exhilerating, inspiring, and creative.

Can you see this type of performance art becoming more main stream in the future?
Circus and aerial dance is already mainstream- aerial theatre is a smaller more specific genre that we believe is growing as more and more people are interested in the superhuman quality of circus but undeniably yearn for one with a real human, emotional story.

What's next for both of you?
In line with growing this art form we have started a company called PDM aerial consulting where we consult large theatrical production on how to creatively and safely integrate aerial art in into their productions as well as teach specialty workshops for actors, dancers, and performance artists. We recently had projects in Beirut, Croatia and on a US production of Midsummer Night's Dream.

You can find out more about the Paper Doll Militia on their website.