Death Of The Diner

Ariel Bradford mourns the closing of her favourite diner. 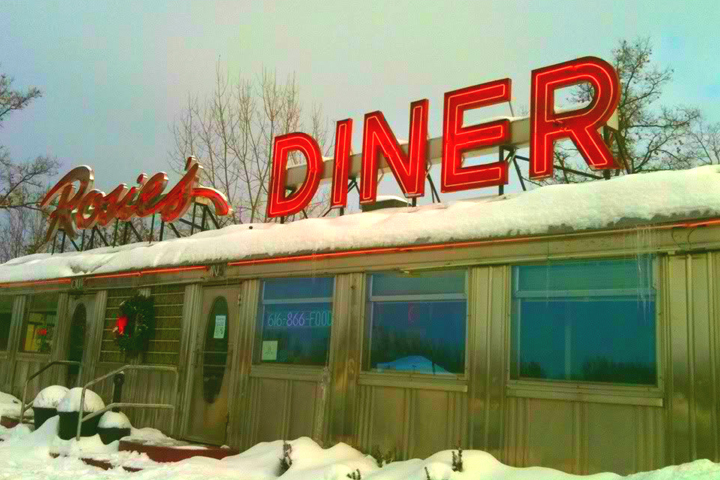 
The only true downside to road trips is people not taking enough of them. Highways are crowded rather than commuters turning to visitors, exploring the precious unknown on the unbeaten path. Non-self-serve gas stations, beautiful old movie theaters, and gas stations where you can still find BB Bats and giant Tootsie Rolls could be just a few hours away.

Diners, like good ol' American food, are hard to come by. The fast food craze of the 1960's killed popularity for the silver-bullet buildings, decreasing the number of operating cars from five thousand to- well, in all honesty, I can only guess. Neglected research is inaccurate and would only prove as an outdated lie if I were to tell you what it said. My approximation is about fifty dining cars are still functioning today in the United States.

Today, only four companies that originally made dining cars are still afloat out of the original eighteen. It's like if you could only buy Ford or Chevy, or if you could only eat at Olive Garden or Taco Bell. Evidence of people trying to save this lost luxury is slowly decaying, the links or pictures being broken on most historically aware websites, proving their extinct updates. The sad truth is that there probably aren't any updates.

People today are concerned with time. Walk into a fast-food restaurant and look behind the counter towards the kitchen. “30 Second Limit” signs with red lettering are posted for employees to embed in their brain. Hurry; people have things to do, appointments to get to, items to purchase. Construction blocks roadways in order to expand and create more lanes for ease and promptness of travel. As if enjoying the sights would be an awful thing to do, people are more concerned than ever to do just so. Hasn't anyone heard of “enjoy the journey, not the destination”?

Silver buildings that make you want to pull out your hairspray and poodle skirt used to line the roads of the virgin Midwest United States, New York City, and New Jersey. A good diner would fry everything except the pie and milkshakes. The cats were hip, the babes were boss, and the Thursday special razzed your berries. Chrome-plated daddy-o's would ditch their pad for a date on cloud nine at the diner.

American fare was generally served, like that you'd find at Coney Island. Hot dogs, hamburgers, french fries- if you could picture Mickey Mantle eating it, they'd serve it.

The best onion rings I've ever had used to be found in Rockford, Michigan.

Rosie's Diner had quite the history. In its heyday, the 1940's, Rosie's was the shining chrome star of daytime television. Friends would gather around the tube to see the “Silver Dollar Diner” starring in Bounty paper towel commercials. Rosie, the commercial waitress, inspired the name change in 1970.

Moving from New Jersey to Michigan in 1991, the '46 Paramount Deluxe Dining Car, it only took five years to serve a million customers. Added to Rosie's lot was Uncle Bob's Diner from Flint, Michigan (a 1947 O'Mahoney) and the Garden of Eatin' from Fulton, New York (a 1952 Silk City). The latter of the two was used as a bar. These three cars make Rosie's the only site in the world to have three original dining cars sitting together.

Since its last re-opening, Rosie's has been featured on Diners, Drive-Ins, and Dives on the Food Network and had a feature on the Travel Channel's Diner Paradise.

Just a few months ago, Rosie's closed again. News traveled slowly, so my hankering for a battered onion will never be quenched. Not even the loyal workers at Rosie's saw the end coming, but financial troubles struck the lost loves of America again. The last owner of Rosie's Diner refuses comment to the press.

The future of Rosie's isn't as cookin' as it used to be, but its memories will last for us few who can cherish them over time constraints. My advice to you is to burn rubber to your nearest diner and support it as long as you can.

Do you diners and has one of your favourite restaurant ever closed?

Abby B.
“I went there about 3 years ago on a road trip and I love it (it just so happens that my sister's name is Rosie so I got a t-shirt for her) I was so surprised to see this on a snippet. It's a small world. By the way that's a really nice article.” 21st July 2012

Ursula B.
“Awesome article! And so true. We really need to support more of our hometown mom-and-pop places before the only options are franchises. Kudos to Ariel for a job well done! ” 15th May 2012