We join Bee on her road-trip and chat to Jason Little about comics. 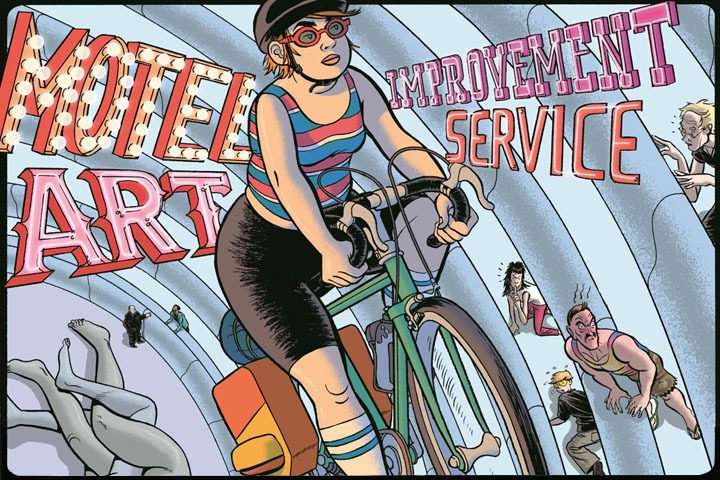 
Motel Art Improvement Service is a graphic novel by Jason Little which follows the adventures of Bee, as she plans to cycle across America. Her plans don't quite go to plan and she ends up meeting an artist who repaints bad motel art with his own subtle improvements. Scroll down for a few pages from the comic and an interview with Jason about his work, comic books and his inspiration. 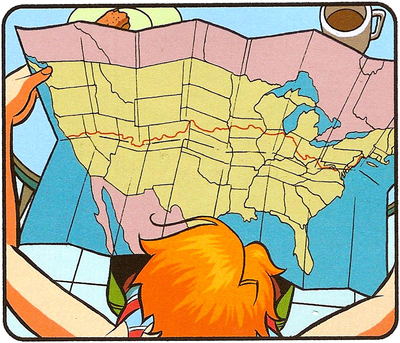 Where did the inspiration for Motel Art Improvement Service come from?
I think a number of plot germs all came out at once back when Bee started to take shape. I probably made a list of jobs that a voyeuristic personality would be attracted to: one-hour photo, hotel housekeeping... I'll keep the other ones secret, so I don't sabotage my own future books. The motel-art-improvement idea came from my friend daupo, who was modifying thrift store prints and paintings. He's got some incredible work on his etsy pages. I sprinkled in a little sex and drugs, let it marinate, and the rest came naturally. And by naturally I mean by revising the text through eight drafts before I started drawing.

How do you come up with characters? Is Bee based on someone you know in real life?
Bee was inspired partially by a prevailing archetype of hip girl in Williamsburgh, Brooklyn, in the early 90s. Glasses and short hair were in vogue. My sister had just moved to the neighborhood, and I hung out with her and her friends. But Bee's fashion sense comes from an ex-girlfriend of mine in Ann Arbor.

Protagonists are usually the hardest characters for me, because they sit at the center of the story, and have a variety of jobs to do for me. Characters that come in, do their thing for a few scenes, and then split usually end up coming more naturally, because I tend to make them run with whatever I need them to do, so they become more distinct in their purpose.

Have you been on a big road trip across the states?
From Binghamton to Seattle, back in '92, with my friend Stefan. I don't remember the motels, actually. I do remember sleeping in the car in Jackson Hole. I also remember eating canned green beans directly from the can. 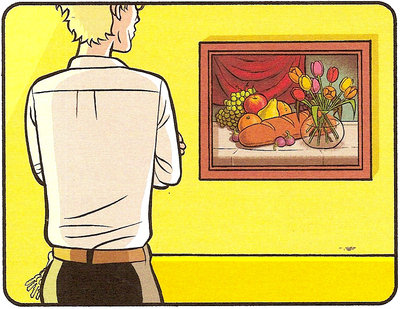 What's the worst piece of motel art you've seen?
I think it was actually in a very posh hotel in D.C., when I joined my wife Myla Goldberg on book tour. It was a detail of Washington in the dollar bill given a faux-Warhol treatment.

Tell us about some of the other comics you have published?
I did a comic book in '99 called Jack's Luck Runs Out which was a Vegas story about an alcoholic blackjack player. The faces were all collaged-in photocopies of the traditional faces from the U.S. Playing Card Company. Shutterbug Follies is the previous volume in the "Bee" series. And I've started a minicomic series called Gimmick Illustrated in which, presently, I'm serializing a black and white story called "Vlak". It's a Kafkaesque Picaresque.

When did you first start making comics?
I took classes in cartooning when I was nine or ten. I spent much of junior high school doing preparatory drawings for an ambitious adaptation of The Hitchhiker's Guide to the Galaxy which I never actually started. In high school and college I drew school paper strips, and I really began in earnest upon graduating from college. 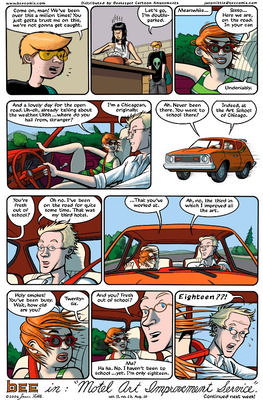 Can you explain your writing / drawing process?
First, I write longhand, which allows the ideas to flow much better than with the computer. This usually varies widely between being strictly expository and having lots of dialogue. In the past I wouldn't draw much during this phase, but now I'm learning that designing characters, environments, and looking at photos for reference should all happen simultaneously, as an integrated process. Next, I draw pencil layouts of each page. I used to write the dialogue page-by-page at this stage, but now I'm doing it all in advance. I used to do them tiny, scan them and blow them up for computer lettering, but I'm getting back to hand-lettering, so I'm doing my layouts at print size so I can write in the text by hand. Next I scan and print out the layouts double-size in pale cyan on bristol board using a large Epson inkjet printer. I build these up to tight pencils with Colerase blue pencil, and then ink it with nibs, technical pens and brushes. 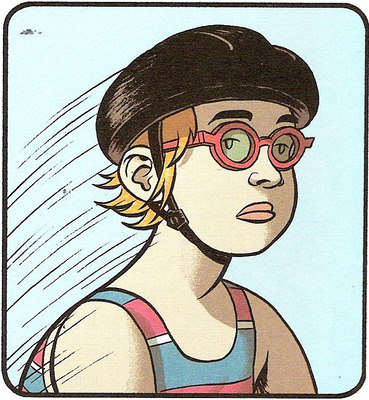 What are some of your favourite comics?
I am a monstrous fan of Marc-Antoine Mathieu, the French author of the "Reves de Julius-Correntin Acquefacqes" books. They are brilliant, humorous explorations of form through dream-space. Only two of his books are available in English: Dead Memory from Dark Horse and The Museum Vaults from NBM. The latter is a better starting place.

A recent discovery is Michael Deforge. He's a youngster from Canada who already has a substantial body of work under his belt. He is seriously experimental, but manages to be cute and sexy at the same time, and can craft a gratifyingly coherent narrative. He also has a strong transgressive streak.

What tips would you have for someone wanting to self-publish a comic book?
It's really the best of times and the worst of times for such things right now. It's great because you can put your comics up on your blog, and if they're really excellent everyone will read them. And there are tons of small-press comics conventions popping up like mushrooms. In addition to SPX (Bethesda), APE (San Francisco), MOCCA (New York), Stumptown (Portland) and TCAF (Toronto), we've now got BCGF (Brooklyn), MICE (Boston), PIX (Pittsburgh), PACC (Philadelphia), MIX (Minneapolis), STAPLE (Austin) and SPACE (Columbus). So there are plenty of great venues for hand-selling your comics directly to readers. The bad news is that it used to be viable to expect your self-published comics to be accepted for distribution by Diamond, which is the monopoly distributor to comic book stores. They used to look kindly upon tiny publishers, and would carry books even if they only expected to sell a couple hundred copies if a particular sales agent liked the title. Now they've become more hard-nosed and won't distribute anything unless they're guaranteed to make money off it.

So my advice is to exploit the web as much as you possibly can, make comics that are beautifully designed and feel as much like delightful art objects as possible (as well as being strongly drawn and written) and sell them yourself at small-press shows.

If you weren't drawing comics what would you be doing now?
I would like an entire second lifetime to compose and record music, please.

Where do you look for inspiration?
I get an enormous charge from ambitious novels, from the likes of Vladimir Nabokov, Georges Perec, Italo Calvino, Umbert Eco, and Victor Pelevin. I've recently enjoyed Little Kingdoms by Steven Millhauser, and Cloud Atlas by David Mitchell.

I recently spent a couple of days at the Louvre Museum and was blown away by the endless inventiveness I found in the African, Pacific, and N. and S. American collection. It's a remarkable distillation of the best ideas from the neglected half of world art. 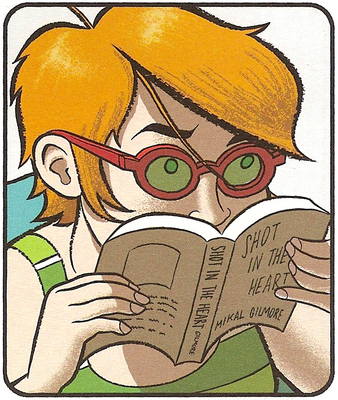 Any tips for dealing with writer's block?
Since I read Lynda Barry's incredible book What it is, I am of the opinion that "writer's block" really means, "I don't feel like writing right now." I think most writers engage in some of the lazy or destructive practices that Barry draws attention to in her book. I certainly did before I read it. If you really want to get some writing in, she shows you how to do it. The fundament of her practice is to work longhand, and to alternate between writing and doodling when the words seem to run out. Keeping the pen moving keeps the brain active, even when the words aren't coming.

What's next for Bee and you?
I'm letting Bee rest on her posterior for a while, though I do have at least two book ideas for her in various states of development.

In the meantime I'm working on a 3-d (anaglyph stereo) comic about a British Prog Rock band in the '70s who record a rock-opera concept album about the discovery of linear perspective at the end of the Medieval period.

You can find out more about Bee, Jason and his comics on his website.