Barbie Of The Undead

Turn a pretty Barbie doll into a brain-eating zombie. 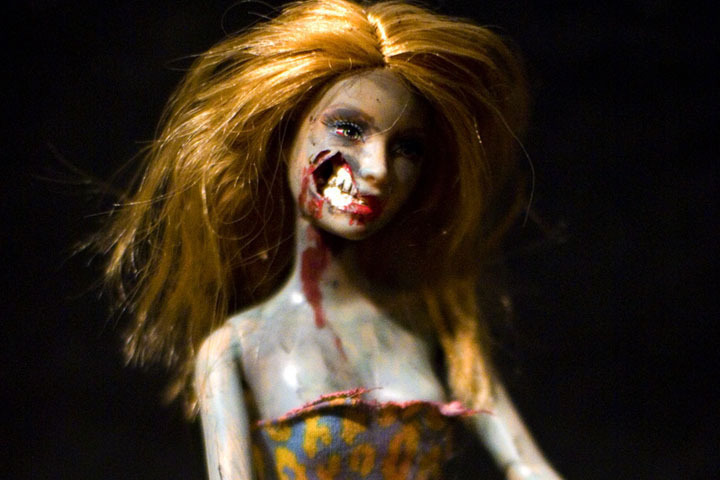 
Did you ever want to turn your pretty Barbie doll into a brain-eating zombie? No? Well, now you're going to learn how anyway. The cool guys at CO+K asked me to write a little guide on how i went about making my Barbie of The Undead. I’m not going to claim I’m the first to do this, you’ll find lots of them on Google. But for some reason people seemed to like my zombie, when they really should be scared to death. Really.

First you'll need to get hold of a suitable doll. The cool thing to do is stealing it from a sister or cousin or something, but if you want to be dull, you can buy one. You’ll find them in all toy stores, and also find tons of them on ebay, flea markets etc.

When you’ve got your doll you should make a plan. I’ve seen quite a few zombie Barbies now, and most of them just end up a ugly mess. It’s important to keep her looking like a pretty girl – a pretty dead girl. You do not want to cut her in pieces and smear blood all over her. Take a look at some zombie flicks for inspiration. I’ll just assume your Barbie-destruction-plan is similar to mine, and explain what I did.

I wanted to give her a few wounds. One on her jaw – as if she’d been making out with her zombie Ken when he suddenly decided to have a snack. The other one on her arm. I kind of imagined she took a bite of her own arm...

So I was going to tear part of her face off. The only problem is that barbies are pretty darned empty-headed. I needed to fill her up to get the desired effect. I used a paper knife to make a small surgical incision in the back of her head. This made a slot for me to fit a scull.

I often use this clay called Super Sculpey. It’s great for making all sorts of stuff. It’s easy to shape, light of colour, and bakes in a regular oven in just 15 minutes.

Now for the scull. I wasn’t sure how much of her face I was going to cut off, so I made more details to the scull than was actually visible on the finished doll. The scull was painted with a few strokes of regular acrylic paint. Luckily the scull was a perfect fit – it wouldn’t be easy getting it out again.

After the scull was in place, I used my knife to cut up her cheek – starting with the side of her mouth, and slowly cutting off small slices of skin until i was pleased. (Now read this paragraph again, and imagine I’m a psycho.)

I then started cutting up her arm. You can’t see it clearly on the photo, but as the arm is not hallow, i could just carve out a bone. You’ll see it better on the finished doll.

Painting a zombie is fairly simple. You’ll need to mix a few colours to get your rotten flesh tone. I used acrylics paint, and also mixed it with some water to get it very thin. I wanted the original skin colour to still be visible. Her hair was also randomly cut, and I actually took some dirt from my back yard for the finishing touch.

Lastly you’ll want some blood. Again – the important thing is not to overdo it. And try to think how blood would be running on a real person. But don’t do too much research.

When finishing up, I realized Barbies are not very good at standing. I guess they’ve been walking on heels too much. I made my doll a base (again of Super Sculpey) to fit her feet. This was done in a hurry, and I wasn’t pleased with it at all, so recently I made her a new one. This is actually the first time I show anybody this updated version, so I hope you like it!

Now you should be ready to beautify some way too pretty dolls. Good luck!

Dave H.
“She looks fantastic, I coveted 2 Barbies for my daughter last year,she has been collecting them for years and is mad on Halloween and horror films,l used 2 of " The look " model muse dolls as they are not open mouthed and look very sinister when finished,l used Games Workshop citadel paints and dry brushed them with a light grey then dry brushed them with goblin green to give tbem that slightly decomposed look,l touched just in 3 places with a hot pallet knife to give an open decomposed wound then dry brushed red gore then just a hint of black to give tbat rotten look,but not to much as you say to spoil the effect,l touched the eyes with a light grey to give tbem that blind look and darkened around tbe eyes,and finally dry brushed tbe hands and her feet with brown earth with a hint of red gore to give that clawing at tbe earth to get out of the grave look,l did have a good advantage as l have been building and painting Citidal war hammer models for people for years and tbey have a wierd and wonderful range of acrylic paints from vomit yellow to snot green ( there actual paint colours !!!! ),I enjoyed converting them.best wishes Dave.” 11th October 2015

CO+K User
“Very interesting idea... But you used the wrong word a ton of times... It's "SKULL" not "SCULL." A scull is a long oar used at the stern of a boat and moved from side to side to propel the boat forward. A skull is the bony structure inside your head. Just thought you should know.” 20th February 2011

kellbear
“I did something quite like this to my sisters barbie when i was 12...it resulted in my stepdad calling me a satan worshiper D=
Lol
This looks ace though =D” 19th October 2010

Chudames
“I am determined to find my old barbies in the basement!” 28th June 2010

Heidi
“That is so awsome, and I think it would be kind of scary if they started selling those... :/ please, give her a mate! Infect Ken!” 20th October 2009

Charlotte O.
“You could do a really cool Cameron style Terminator Barbie from the Sarah Connor Chronicles. Awesome job

Charlotte O.
“You could do a really cool Cameron style Terminator Barbie from the Sarah Connor Chronicles. Awesome job

Shauntil J.
“i defintately wanna give this a try if i can stop procrastinating ” 15th October 2009

Dark Crystal
“Love it! The best thing you could do with, Barbie.” 9th October 2009