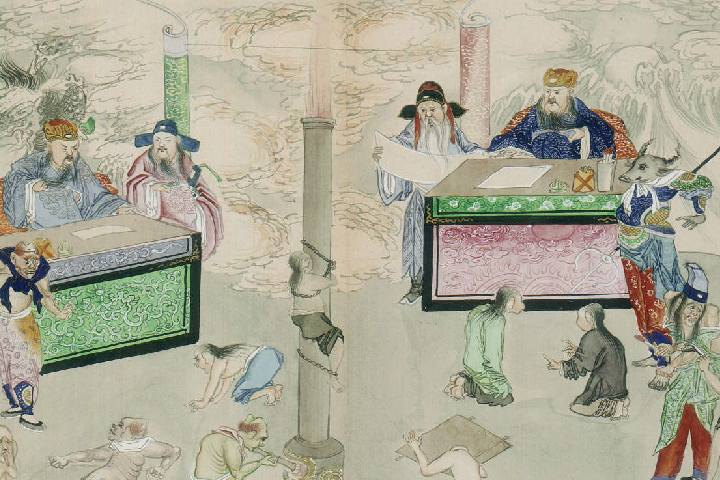 
Across China many different religions are followed, including Buddhism, Taoism, Islam and Christianity. Within these religions there are variations in beliefs around death and the afterlife, but the general religious attitudes in China are based around a mixture of Taoism, Buddhism and popular belief.

Chinese Buddhists believe that unless a soul is free from sin, it will spend a time in Hell after leaving Earth. Sin can be all sorts of things, ranging from “perverted” sexual views, to stealing, to dying in childbirth, and are not necessarily things which the person could have avoided. Hell is viewed as a place full of pain and gruesome punishments.

Unlike the Western view of Hell as something infinite and eternal, the Chinese view Hell more like Western religions view purgatory; as a period of suffering which can be escaped from once the sin has been atoned for. Upon arriving in the afterlife, the soul is judged by the Ten Courts of Hell which decide upon the penalty the soul will be given. After this, horrific punishments such as being drowned in blood are performed until the soul has atoned for whatever sin was committed. Souls can also buy their way out of Hell by paying the attendant spirits or demons, using money which they have taken with them from their earthly life (this will have been either burned at their funeral or interred with them). The soul can also avoid Hell if a holy person called a Bodhisattva, who has given up their chance to go to Paradise in order to help souls who have sinned, atones for the soul’s sin by praying.

Once the soul has left Hell, it is reincarnated and sent on into a new earthly life. The level of sin which they had previously committed affects what they are reincarnated as. For example souls which have performed extremely sinful acts will come back as creepy crawlies or something similarly lowly, a soul which has committed a moderate level of sin may come back as a poor person. In the cycle of death and rebirth, depending on the amount of sin committed in each life, souls can go either further down the karmic ladder, i.e. becoming more and more lowly creatures, or further up to attain human form. Souls which are free from sin and have led pious lives attain Paradise.

The Chinese idea of Paradise is different from the Western idea of Heaven. It is not full of the souls of deceased loved ones, but is inhabited by souls which have attained the utmost wisdom and purity, and is seen as a place of peace and spiritual enlightenment. Some believe that Paradise exists only as a state of mind which is reached through enlightenment and leading a pious life, often referred to as nirvana.

During Neolithic times the dead bodies of the wealthy were buried with jade bi, or discs, on their bodies. The more prestigious, such as royalty, were buried in complete jade suits made from tiny squares joined together with metal. Jade has associations with healing, immortality and preservation, so it was believed that burying the body with jade would conserve it. Some jade bi have been found with discolouration caused by exposure to heat, so it is thought that cremations were practised.

In ancient history and up until the beginning of the last century the Chinese emperors, and other rich nobles, were buried in huge tombs, with many different sections and rooms-similar to the pyramids in Egypt. Also like the Egyptian pharaohs, the emperors were buried with replicas of objects from life, called grave goods, including food, transport, and even models of servants and armies. The famous terracotta army is an example of this practice, as the pottery warriors were put into the emperor’s tomb to guard him in the next life. This replaced an earlier and somewhat grisly ritual of human sacrifice (which had stopped around the 3rd century BC) where deceased men’s wives and servants would be walled into the tomb along with the dead body and left to die, in order to accompany their master into the afterlife. The grave goods buried with the deceased would also reflect the person’s status-the terracotta army reflected the fact that the person being buried was the first emperor of China, a strong ruler who had united the country. Therefore the grave goods, and the grave itself, were elaborate, and on a huge scale.

In addition to replicas of objects from everyday life, symbolic items were placed into the tombs. Tomb guardians were fearsome looking beasts made from pottery or wood, and placed in the grave to fend off demons and evil spirits, as well as the rather more earthly problem of grave robbers. These figures often combined human and animal features for the scariest effect-the one pictured has a human face with a lion like body.

Chinese burials are complicated and centre on traditional rituals and codes of conduct. The traditional burials are still practised in rural areas of China, but more Westernised funeral customs have also started to be used in most of the country.

Although anyone who dies will receive full burial with the accompanying ceremony and ritual, only elders can be mourned for. Therefore children who die, or young people who are unmarried and don’t have children, will be buried in silence. The corpse will be washed and dusted with powder, and buried in their best clothes, with styled hair and full makeup if female.

Corpses must not be dressed in red, the colour of happiness, as this means their spirit will come back as a ghost. Usually dark colours such as black or blue, or white, the colour of mourning, are used. After a death, all images of deities in the house are covered with red paper and mirrors are removed. It is believed that anyone who sees the reflection of a coffin in a mirror will have a death in their family. If the person has died at home then their coffin will be displayed inside the house, otherwise it will be displayed in the courtyard outside the house. The coffin is not sealed during the wake.

During the wake, offerings of food will be made to the deceased. The relatives of the deceased gather around the coffin, positioned according to their status in the family. Wailing and crying is encouraged as a sign of respect for the person who has died. An altar will be set up at the foot of the coffin with a white candle and incense burning. “Hell money” (paper money) and paper replicas of household and everyday objects are also burned. This is a development of the earlier practise of burying grave goods with the corpse. The wake can last for several days, during which time a monk will say prayers and scriptures to help ease the passage of the deceased’s soul into the afterlife. The coffin has to be guarded during the wake, so the deceased person’s relatives play gambling games in order to stay awake and to lessen their grief.

When the time comes for the funeral, the coffin will be nailed shut to symbolise the separation of the living and the dead. All present will turn away while this is being done as viewing it is considered to bring bad luck. For the funeral, the coffin will be carried to the grave by relatives and other people associated with the deceased. It is considered a great honour to carry the coffin.

If the coffin must cross water, the deceased must be told; as it is believed if this is not done the soul of the person will become confused and be unable to pass on into the next life. Cremation is not generally practised. During the burial the eldest son of the dead person will take a handful of earth from the coffin, and place it on the family altar at home. Prayers are made over this earth to bring good luck for the future. Clothes worn by the funeral party will be burnt afterwards to get rid of any bad luck. Traditionally family members do not cut their hair for 49 days after the funeral, although it is only more elderly people who still uphold this custom. The mourning period lasts for 100 days.

It is believed that the spirit of the deceased will revisit the family home 7 days after the funeral. Red plaques are put outside the house to help the spirit find its way. Family members are expected to stay in their rooms on this day as the spirit takes its last look at its home.

All of the images in this article are of objects from the Museum of East Asian Art. If you want to find out more about death in Chinese and other Asian cultures, the curator is holding a talk called “The Bureaucracy of Death” on October 29th.

Maxz C.
“Hi~ its a great informations you have given.. i have some questions.
1) what will happen if carrying the coffin which is have no relation at all to the death?
2) what will happen if the cloths and etc didn't burned after the ceremony??
i have such a feeling that i have bad luck till now since the incident when i was still very young” 22nd September 2010

mock turtle
“my mum got to see a jade burial suit, said it was beautiful. one day i hope to make the same trip as her ^^” 7th January 2010

mock turtle
“my mum got to see a jade burial suit, said it was beautiful. one day i hope to make the same trip as her ^^” 7th January 2010

Jet H.
“thanks for this amazing information! love it” 26th October 2009