Girl In A Coma

We chat to Phanie from all-girl rockband, Girl In A Coma. 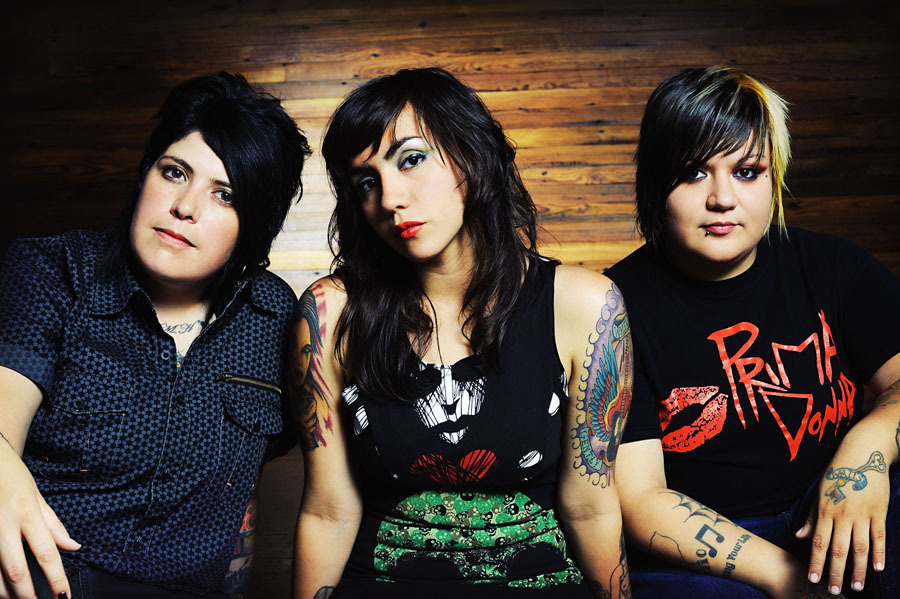 
How would you describe your music and what influences your sound?
This question is always tough for us.. because we really don't know how to describe it. It's rock and roll, it's punk, its pop, its mellow, it's what we like. The three of us listen to all kinds of music ranging from Patsy Cline and Elvis to Sonic Youth and Nirvana. Which probably explains why our music goes every which way.

Where did you first meet and how was the band formed?
Jenn and I (Phanie) met in Middle school in the early 90s. We had the same musical influences so we decided to start a band. After a few years at it... we decided to change our lineup. Jenn was singing and playing bass and I was on guitar. We started looking for another singer and at the time.. Nina had been pracitcing on my guitars (she's also my younger sister) and decided to show us a song. We were blown away by her voice and decided to make her the singer, even though she was 8 years younger than us. We could not find a drummer... so Jenn convinced me to learn and play.

Is music something that you have always been interested in?
Always. The three of us have always just connected with music. Jenn's parents were always music fans and constantly listening as well as Nina and I's. My father and Nina and I's grandfather also played in bands.

Where does your name come from?
It comes from the Smith's song Girlfriend In A Coma.

How was the process of breaking in to the music industry?
For us... just good timing...Sort of. We made a demo and knew we had to tour. Luckily we loved to travel... everyone we've meet who has helped us move up is because of constant touring. It's a lot of hard work but its also always a lot of fun. We don't even realize that we've broken in. Playing to us is all we know and need to feel successful.

Do you remember your first gig? Tell us a bit about it?
It was in San Antonio in 2001.. a few days after Nina's 13th bday. I was working at a thrift store and a customer who was in a band asked if my band would like to open a night she was playing because a band dropped out. She knew I had started a band...but we had just been practicing for maybe 6 months... we decided to do it. We showed up, nervous and invited all our friends. All three of us would not talk or move and Nina stared cross eyed at the mic. After the gig our friends were sweet and said we did a good job. I'm sure it was awkward.

Where do you look for inspiration when songwriting?
Everything around us.. whatever is happening in our lives, what we go through, what others go through... what we're listening to. It's everything.

How does the songwriting process work for the band, do you all write together?
It starts with Nina. She likes to sit and come up with a melody and lyrical melodies and record it. She then shows us and we take it from there. We work on it musically together and Nina writes lyrics.

Do you enjoy touring and where are your favorite places to tour?
Always... it's the best thing about being in a band. Besides Texas, the West Coast has always been amazing. ..East is getting up there.

Do you get much of a chance to come home to San Antonio?
We do.. we just had a 4 month break with occasional shows. When we release a record our minds are set on touring for 2 years with an a few week breaks home in between.

What's it like working with artists like Joan Jett, how was she in person?
She's amazing and amazing to us. She's very supportive and gives us the freedom we need as well. It's amazing how long shes been in music yet still so humble and true.

How would you describe the band's style?
Very we dont give a fuck. We are who we are and we have no apologizes for it. Fat, skinny, dirty, whatever.

How many tattoos do the band have, and can you tell us the story behind your most prized tattoo?
Somewhere close to 50 i think. Nina's favorite is her Frida Kahlo tattoo, Jenn's is her Elvis rooster, or cock, however you want to say it and mine is my San Antonio tattoo.

Where do you see yourselves in 5 years time?
Touring with more records under our belt.

Find out more about the band and when they're touring on their website. (Photography by Adam Stockstill, Michael Rubenstein & Sarah Quiara.)

DrEaMeR
“These girls Rooooooock!!!
thanks to Ginger Rivers for this feature! ;)” 19th April 2010

oliver h.
“but their album - you won't be disappointed. Every song is fantastic!” 15th October 2009