Electropop band Ladytron tell us what's really on their mind. 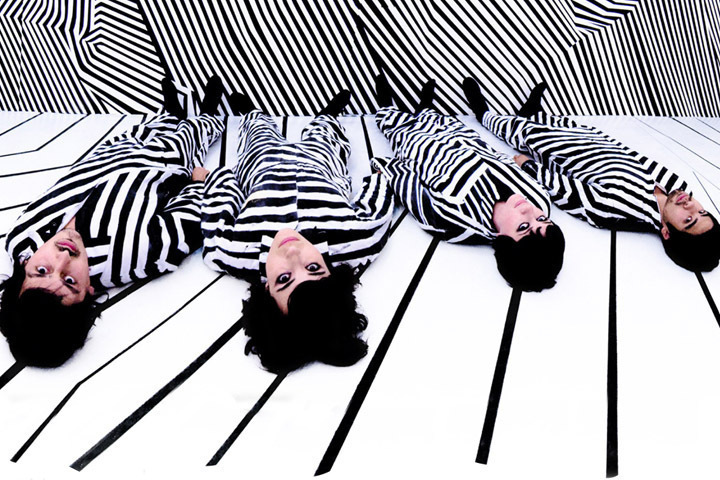 Ladytron are a British electro-pop band, known for their unique look and experimental style. Helen Marnie, Mira Aroyo, Daniel Hunt and Reuben Wu, have four albums under their belt and hit singles including Sugar and Everything You Touch.

"When we first started out we didn't seriously see ourselves still in a band 9 years down the line. It was a fun thing for us, that we did at weekends. Doing the odd gig in Barcelona or Paris at friends clubs. However, when we released our first album, there started to be a demand for us to play and tour, and that's when we had to start taking things more seriously", explains co-singer Helen. Ladytron formed in Liverpool back in 1999, and now almost a decade on, she reflects on where they came from to where they are now. "I was studying there and bumped into Danny one night at a club night he ran. Danny and Reuben knew each other from the DJ circuit, and Mira was introduced by a mutual friend. Mira and I are based in London now, while Reuben still resides in Liverpool. Danny has lived in Milan for the past 2 years."

"I think we're more confident now about what we want. We know where we want to take a sound. We're in a position where we can self produce, with perhaps additional production from a producer or collaborator." The band are known for their unique electo-synth pop sound and their experimentation with instruments, both in recordings and during live sets. "Often you can discover a new sound just by putting a synth or a guitar through an FX pedal. It's just a case of experimenting. We have a lot of synth in our live setup, as well as in the studio, so there is plenty to mess with."

"It's difficult to pinpoint our sound.'"

Though the members met in Liverpool, Ladytron are often described as having a more European and international sound. "It could be because we're from Scotland, England and Bulgaria and that we have dual lead vocals. I'm really not sure. It's difficult to pinpoint our sound." However, when it comes to songwriting, the band prefer to wait until they get home before setting pen to paper. "We all look close to home. None of us write whilst we're on tour, it's just an impossible environment to be creative. Whenever we have time off is when we start to write. You need your own headspace to get in the right frame of mind. We're usually inspired by the things that happen around us. Images, as well as personal things."

"Witching Hour was a turning point for us. We'd toured it extensively and it was the album we'd been most happy with to date, so it was only natural for us to push things a bit more and experiment with drums and synths. The result of this being Velocifero. As a band we are far more confident these days. Confident with our sound and where we want to go." Now onto their fourth album, Velocifero was released exclusively on iTunes as a download. "It was a good opportunity for exposure of the new album. Everything is digital these days, however the physical will not die because there are diehard fans out there who like to hold the real thing, view the album cover and credits, or get the free poster that comes with it. That is something you just don't get with digital."

"We don't always agree on music, but we do have similar tastes. As there's 4 people in the band though, there are alot of bands we we're into. It ranges from classical to folk, to electro to pop. Influences include Joni Mitchell, Bob Dylan, MBV, and Eric Satie. These are just a few." As well as live performances with Ladytron, several of the members take to the decks at club nights as well as creating mixes for other bands, including Placebo, Nine Inch Nails and Goldfrapp. "Danny, Mira and Reuben have always Djed, and I took it up a few years ago. It can be fun playing around with someone elses song and creating what you want." Considering whether she prefers playing live to DJing, Helen states, "I'm much more confident being on stage and performing Ladytron songs. I don't think you can beat being on stage, doing your own thing to a crowd of people. DJing can be fun, but it's definitely more of a sideline. Whenever we start a new tour we always plan the songs we're going to play. We like to keep things fresh and try to pick the set that will best represent us now. Live gigs are not just about our sound, it's also about the crowds interaction. If the crowd are on fire, it's likely we will be too!"

The band are revered for having a very unique look, on stage and off. "I'm currently teaching myself to sew and designing clothes. It's just a fun thing at the moment, but I hope to do something more serious in the future. Perhaps have my own line of clothing. I did a few modeling jobs before I joined the band but I don't think this has had any impact on the band whatsoever. We are all pretty individual about our style, however when it comes to stage we like to keep things simple and classic."

For the Speak Your Mind issue of Snippets, Helen considered the issues close to the bands hearts. "Mira is a Pescetarian. I don't eat red meat. I am against fur in fashion and would love to save the whales and dolphins from slaughter that is claimed to be scientific. Whales and dolphins are very clever mammals and it brings me to tears to see them tortured."

Having toured heavily Europe and the rest of the world, the band are no strangers to travelling. "I find hiding in my bunk is a good way to cope when you need time to yourself. Also, i recently bought a Brompton folding bike which i took on tour to North America and Europe. It made such a difference. It made it so much easier getting around and experiencing different sights of the places we visited. We have quite alot lined up for the next year. Once all the summer festivals are over we jet off to Australia for our first tour there, then return to tour Europe again. That takes us up to Christmas. Then we'll be going back to North America and South America in early 2009. There is no rest for the wicked!

You can find out more about Ladytron, check their tour dates or pick up a copy of Velocifero from their website.

Until they came out with Velocifero.

What happened? Did they all get matching lobotomies?” 16th September 2008

lex_is_awesome
“i love ladytron!!! i stumbled upon them on myspace one day and been a fan eversince!!!!!! totally rockin band!!” 14th September 2008