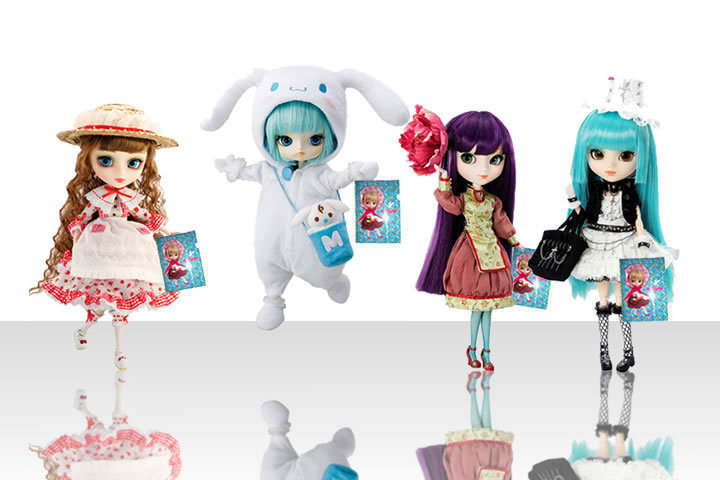 For a chance to win this very cute Blythe themed plastic file, simply tell us what you love most about these dolls, the best answer wins!

Congratulations to our winner Emmy.

Learn all about Blythe and Pullip dolls in Emma's article, Doll Parts.

Sew Lizzy
“Their little faces look as though they have a whimsical question to ask of someone...anyone.” 15th October 2008

Strawberry Anarchy
“I would kill for a big one i have a mini blythe! i love the eyes as they say the eyes lead to the soul of a person and im fascinated by these big eyes! i don't know why people find them scary ? ” 13th October 2008

queenfairypants
“*cough* that's 'how' am i supposed to choose, how unprofessional!” 12th October 2008

queenfairypants
“ooh am I supposed to choose!!! The winner will be announced in my blog when the next issue of Snippets comes out

Marla
“Blythe dolls represent the freedom that came with childhood. In this day in age when life is so demanding and stressful it's an amazing feeling to just be able to stop, take a breath, and play with a doll for awhile. Each one I customize becomes a friend with her own story, her own personality, and when I'm finished I feel a huge sense of accomplishment. They're all so beautiful and they bring out the creativity in their owners. What else could you ask for? ” 7th October 2008

Bohemian1
“Blythe dolls remind me so much of the 60's and the 70's which are era's in cultural history that I am enamoured with.” 7th October 2008

Sam
“I love how the look at you as of they were real. Kind of like they want to own you. I love em! You can make them look ao cute. ” 3rd October 2008

emily h.
“they're what i strive to be- myself! who of us havent ever awaken with the desire to wear a bunny suit?! thats pretty much every morning. And tights are the tops- they make any outfit!” 30th September 2008

Emmy
“I love the creativity that my pullips bring out in me. They've caused me to learn to sew, to style their wigs, to customize their faces and to write. My girls have become characters in a story that I have been obsessively writing for months. My dolls have led me to photography, which is a passion of mine I never would have known if it weren't for them.” 21st September 2008

maryam
“I love how innocent they are.. cute, fun, and amazingly dressed pretty dolls <3
each one has its own character and unique style
uhhhhh i just love them <3 T_T” 18th September 2008

Kalli
“I absolutely love how unique each doll is. The wide assortment of hair colors is what really catches my eye. It reminds me of a time when I had the freedom of multiple hair colors that covered the spectrum. And oh the clothes...I think that every girl secretly wishes that she had a wardrobe matching the Pullip dolls'. They certainly have a style of their own.” 18th September 2008

NYAPPY!
“I love how they truly play up innocence, instead of being overly adult. They're cute, fairly customizable, and are in so many popular themes. They're not like other dolls, but that doesn't mean they're not up-to-date. With outfits inspired by Sanrio, H. Naoto, and many other popular labels (in Japan, and a bit in the States), this is the doll we can really relate to these days! ” 17th September 2008

Shivi
“I love their eyes! And apparently they change colour too! I want one soo bad but since they're a little expensive I can't get one but a file would be the next closest thing!” 16th September 2008