A beginner's guide to the big eyes doll... 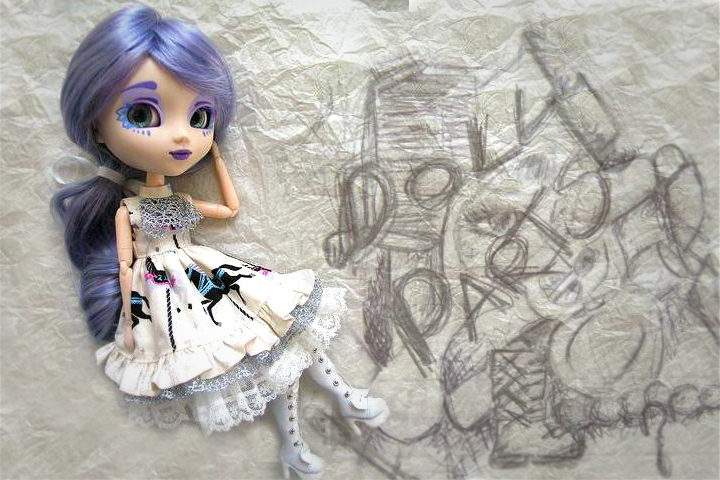 
For some, the image of the modern fashion doll provokes offence. Barbie, with her tiny waist, oversized head and large breasts would surely fall crumpled on the floor, clutching at her pink stilettos if she existed as a real woman.

The idea of such dolls was always a play thing for me. My first Barbie had blue gems for eyes, a tight silver dress and Tina Turner style hair. It never occurred to me that she may have been playing with me as much as I was playing with her. Was Barbie moulding me into the perfect plastic, generic housewife? Was Barbie toying with my mind, making me think I must be blonde and have a 4 inch waist? Er... no, but according to some articles she was.

What then, does that make the Jun Planning dolls of Japan? Known as Pullip, their heads are far larger than Barbie's. However their bodies reflect that of a more realistic older teenager and their faces glow with innocence due to their large wide eyes and coy smiles.

Jun Planning began production of Pullip dolls in 2003 inspired by the Blythe dolls created by Alison Katzman in 1972. Blythe's have large eyes and small bodies like Pullips. Katzman's dolls were inspired by those already about in the 60's and 70's but they took 30 years to become as popular as they are now.

Each month a new Pullip is released and they have limited availability which makes them costly and leads to collectors swapping, selling and buying with other collectors.

It's not hard to figure out why you soon become hooked. Since 2003 Jun Planning have made boyfriends for their girls (Namu & Taeyang), little sisters (known as Dal), miniature versions (Little Pullip) and even teamed up with the popular Hello Kitty creator Sanrio to bring us a Hello Kitty Pullip, My Melody and Cinnamoroll Dals. Each with beautiful outfits and themes.

If you go searching for Pullips and Blythes you will notice a fantastic array of home made outfits and accessories. This is a sort of 'sub-craze' associated with these big eyed dolls. Owners also show off their collection in photographs on the various blogs and forums there are about these dolls. Customising is also popular, but this time she won't get a bad haircut and thrown out the window like Barbie did (these are friends accounts, my Barbies were immaculate).

Brigitte Coovert is a Floridian who discovered Pullip in 2005. For two years now she has been customizing Pullips, they are born into the world as Pullip and grow into Zombuki! With carnival coloured make up and clothes I wish were made for people, her photographs are certainly eye catching.

These dolls are not toys like Barbie was, they are sort of the Japanese equivalent to porcelain dolls. They bring a sense of imagination and craft back to those who may have lost theirs. For me, they bring back my childhood freedom and imagination which due to personal reasons was tainted and disrupted. A kind of freedom and imagination that I had in the days I played with my Barbies, but this time bigger and better than ever.

Adore is a free online magazine dedicated to the photography of these dolls. I got in touch with Adore's leading dolly, Sue Lork to get her perspective on Pullips.

How did you get into Pullips? Your inspiration for the magazine came from your love of them but how did that develop into a publication?

"It all started with collecting Pinky:st figures. While I was surfing the net one day I found some awesome photos of Pinkies and immediately fell in love with them. I wanted to know more about them and found pinky-street.com, a site run by lovely Inga, who's a fantastic doll photographer and her photos were my decisive argument to buy my first two Pinkies. After a while she began to post photos of [Pullip] dolls I'd never seen before and they were so fascinating to me. That was my first time seeing a Pullip!"

"Photographing Pinkies is real fun but I found myself wanting to do more "fashionable" photos, so I ended up buying my first Pullip. I thought it was a shame that there wass no other platform to show them to doll lovers. I'm a graphic designer and before I started working as a freelancer, I worked as an editor and designer at a publisher. Some of my jobs there were creating the magazine layouts and I loved that very much. The idea for Adore was finally born in summer 2006 while I was searching at dollie-mixtures for a special photo I saw some time ago and couldn't find it."

Which doll was your first?

"My first Pullip was a Latte, which I bought in April 2006. I wanted a Vivian, Assa or Panda first but since they were so hard to find and expensive, I decided to buy her instead. I bought a Rovam two weeks later and Assa a few weeks later too."

Which doll is your favorite and why?

That's really hard to say since it changes from time to time. My three favourite girls are my Papin Sadie, Phoebe, my Prunella and my Rovam Tira. Papin and Prunella are so easy to photograph and especially Papin, she's really versatile! And Rovam is just one of the most beautiful Pullips ever made - in my humble opinion. I'm really into Dal's at the moment too.

Any tips on photography? Practice! Look at photos you like, read tutorials, ask people how they did it. There are some minor things that make a photo a good photo! Pay attention to details like the hair or the clothes. It's not good if your doll looks like she's came straight out of bed, except if you wanted that look. Try different lights and see what works best for your photo intention. Check the shadows and lights carefully; you don't want her to look like a zombie. And last but not least: buy a tripod (a cheap one will do) if you don't have a steady hand or you're photographing at difficult lights. Blur will ruin your photo!

Any tips on buying/selling/customizing? If you really like a doll and can afford her, get her while she's available! Otherwise you'll regret it later when her price increases.

What do people think of your passion for Pullips? Most of my friends and family like what I do with them. I guess, at first they didn't understand why I started to buy dolls, as I haven't been a dolly person before. But after a while they got used to them and now it's a normal part of my life and they accept it as it is. My hubby has even changed from a dolly opponent to a dolly accessories scout: he's so good in finding stuff for my dollies!

Do you think they come alive at night a-la-Toy Story? That would be really scary but funny too! It would be helpful to tell them how to pose for a photo shoot instead of posing them myself. You wouldn't have to be worried about them falling over if you hadn't balanced them right.

What do you get out the most from these little ladies? They just make me happy! I love to look at them, to dress them and of course, to photograph them! I love to pose them, I love to try new ideas and I love to see them as my models. I adore fashion photos like the ones in Vogue or Glamour and by photographing Pullips I can play fashion photographer. It's a really good way to improve my photo skills.

For your chance of winning a Blythe folder, check out Emma's Mini Blythe Competition.

You can read Adore online now on their website. Brigitte Coovert's work is available at: Zombuki (see links section for blogs/shops), and you can buy Pullips and Blythes from: Pullip Style (check out the forum), Sue Lork's shop Plastic Pop, Tokoyo Toys and This Is Blythe. You can also talk, buy and sell at Dolly Market.