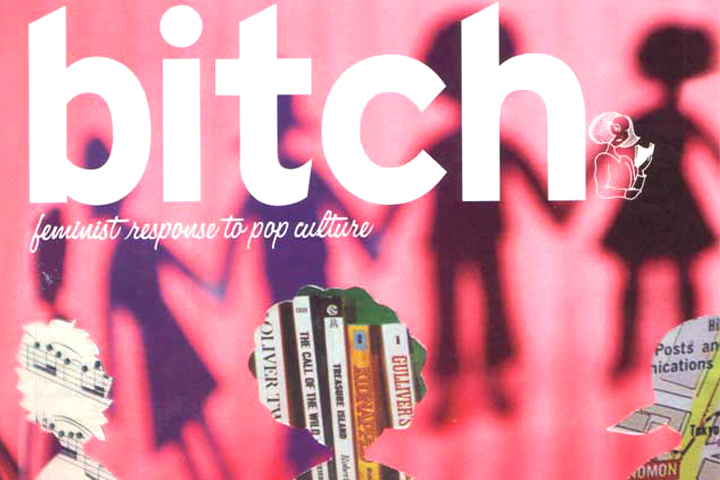 Bitch: Feminist Response to Pop Culture launched back in 1996 and since then has grown a reputation for being a credible, non-profit, feminist magazine full of witty and smart analysis of popular culture.

Now in its twelfth year and rapidly evolving into a multimedia enterprise Founder and Editorial Director Andi Zeisler tells Snippets more about Bitch and demonstrates why the magazine is still:

"One of the best-written and edited girl-centric zines around." --Spin

What does the word 'Bitch' mean or represent for you?
"When Lisa and I started Bitch in 1996, we wanted to call it Bitch because that word seemed to really encompass a lot. For instance, with catcalling on the street - we were both from New York, where street harassment is just awful, and it tends to follow a pattern: A guy or group of guys whistles or hisses at you, or says something that's somewhere on a spectrum between annoying and obscene. If you don't acknowledge or respond, he/they invariably call you "bitch." Or take women in power - it's almost a cliche now that an assertive, take-no-crap man is acceptable and expected but an assertive, take-no-crap woman is a bitch. But it's a cliche because in so many cases it's so true... Lisa and I [realized] that so-called bitches don't get to self-define - it's always other people describing them as such. And if we said all the things we wanted to say about women and feminism and popular culture and representation, we would likely be playing right into that cultural definition of a bitch - so calling the magazine Bitch would be a kind of anticipatory retaliation.

But we also were focused on "bitch" as a verb as well - bitching as a legitimate form of speaking up and giving voice to a problem. And we liked the fact that the word was a noun and a verb, and could be interpreted either way."

Do you feel we are any closer to challenging the assumptions made about a woman who exists outside of the prescriptive notion of how women should behave or look?
"I think we're closer than we were in 1996, when Bitch first launched. It kind of depends where you're looking. Obviously this presidential primary year has really highlighted the fact that there are still very rigid expectations of what's expected and not expected of women - I've heard (and heard about) so many people who refer to Hillary Clinton as a "bitch" but can't necessarily explain why they think that. It's still just the go-to descriptor for a woman doing something other people don't like. On the other had, there's been a move within entertainment-focused pop culture toward really embracing smart, human, flawed, complicated characters who aren't always feminine and nice."

Is maintaining a sense of balance within the magazine problematic given the diverse opinions of both Bitch contributors and its readership?
"Sometimes, but that's what both the staff and the readership often feel is valuable - that the magazine is a dialogue, that we do encourage dissent and discussion, and that we don't presume to be the last word on any given topic. Any magazine that calls itself progressive or feminist really needs to acknowledge that there's no monolithic definition of either of those terms, and Bitch tries to do that as much as possible."

Do you find the increasing trend of size-obsessed, celebrity focussed magazines and makeover television shows alarming and do you feel enough is being done to counteract their harmful message to women?
"Oh my gosh, they're definitely alarming. As far as counteracting them, there are lots of great organizations out there who do things like organize speakouts and letter-raising campaigns, and who also teach young girls the importance of media literacy in order to be able to talk about these pop products. (Some of them: About-Face, Turn Beauty Inside Out, Dads and Daughters.) But I wouldn't necessarily say these projects, as great as they are, have an effect in the mainstream. You're not going to see, for instance, US Weekly running a feature that's like "How to talk to your daughter about the eating disorders we feature on our covers every week!" US Weekly is just going to keep baiting readers with stories about eating disorders and diets and makeovers, because it's not in their economic interest to try and help solve those problems or provide antidotes to them. Their mandate is just to sell copies."

Have you sensed a shift in what concerns today's feminists?
"I think so, although it's hard to say given that, again, I don't think feminism has ever been as monolithic or cohesive as it has been made out to be. There are definitely a lot of important discussions going on these days about the importance of an intersectional approach to feminism, one that's not just about classic issues like the wage gap and reproductive autonomy, but about race and class factors, about transgender rights and identities, about labour politics and immigration and other things that people often don't look to feminism to analyze. But those are some of the most vital discussions happening. Which is not to say that the classics aren't crucial anymore - they are. But things have broadened."

How do you feel about mainstream advertising's attempts to capitalise on a 'feminist' sensibility to shift its products?
"Well, it's nothing new. Mostly it's just kind of laughable. I guess, given that advertisers are going to sell their products to women either way, I'd rather see them do it by speaking to women as though they have brains than as though they don't."

Is selecting appropriate advertising to sit within the magazine a difficult process?
"Not really, since we've never been hugely focused on selling ads to begin with. We've always had a very self-selecting pool of advertisers - like-minded book and record labels, women-owned businesses, female-focused sex-toy shops and websites, etc. There have been a few occasions where we've made the decision to turn down an advertiser, but it's always been a very carefully considered decision that takes into account our ethics and aesthetics as a reader-supported organization: Basically, if we think a certain ad or type of advertising would make Bitch's core readership uncomfortable or alienated, we really consider if that ad money can be considered worth it."

Do you see the internet as a growing 'girl-friendly place'?
"It's so hard to answer this definitively. On the one hand, yes, absolutely, simply because there are so many ways for girls to access resources and community, and so many organizations doing great work to bring together everyone from rape survivors to gaming enthusiasts to people who want to talk about global organizing or band together to protest a horrible ad on television. But, on the other hand, there are also places on the internet that really magnify parts of an already unfriendly-to-girls culture, like gossip sites devoted to picking apart female celebrities' bodies, and the bullying potential of social-networking sites likes MySpace."

How has the magazine managed any negative press or attacks from anti-feminists over the years?
"I think we've just expected a little bit of it to come with the territory - "feminist" is still a fairly polarizing identity in mainstream culture, since for so many people it really conjures up an outdated notion of angry women, unshaven legs, and all-out war against men. Some of the negative comments or press we've gotten over the years has been based on that assumption - which isn't too troublesome, because generally it's pretty easy to brush off as just ignorance.

It's interesting, because when I compare Bitch as a magazine to feminist blogs that are comparable or bigger than Bitch in terms of readership, I feel in some ways like we've gotten off easy as far as antifeminist press or commentary. I think on any given day on a mainstream feminist blog like Salon's Broadsheet, there are more mean-spirited and antifeminist comments than we've gotten in 12 years at Bitch. Ultimately, laziness has a lot to do with how people respond to things in this culture, and it takes a lot more work to send a piece of hate mail to a print magazine than it does to dash off a hateful comment on a blog."

Although the subject matter of the magazine is serious do you see humour as a tool of communication, expression and resistance?
"Absolutely. Not every subject can be made funny, but using wit and sarcasm is such a good way to disarm readers who otherwise might not want to engage with the topic."

So many women (me included) are immersed in popular culture. Do you think it is important to not only attack and dissect the sexism that is inherent in popular culture but also to celebrate the positives?
"Yes, and that's always been the aim of Bitch. Lisa and I started the magazine because we truly loved pop culture, despite being able to clearly see where it was failing and short changing women and people of colour and lots of other perspectives. We wanted it to be better. And our contributors tend to feel the same way, which is why they not only critique what's most readily accessible to be critiqued (stuff like The Bachelor and Flavour of Love and celebrity tabloids) but are also really engaged in seeking out and championing the alternatives. All of my all-time favourite pop culture scholars - like bell hooks, Susan J. Douglas, and Dave Hickey - are people who clearly love popular culture even though they don't just accept it, and that's kind of what we strive for in Bitch."

Are there any women currently visible in the media that you personally admire or find inspiring and why?
"A bunch. There are writers and cultural commentators I follow as closely as I can: Susan J. Douglas, Sandra Tsing Loh, Margaret Cho, Katha Pollitt, Julianne Malveaux, Ariel Levy, and more. And entertainment people: Lily Tomlin, Tina Fey, Allison Anders, Mary Gross. And activists like the Guerilla Girls. I could go on..."

What can we look forward to in the next issue of Bitch?
"The issue we just sent to press is the Genesis issue. We always have themed issues, and they're not always super literal, but this issue does have a lot of thematic stuff going on. We have an interview with a Bible scholar who wrote Eve's Bible, which is a kind of primer on how women can read the Bible with an eye toward centring the female/feminist perspective. We have a pretty fun piece on Star Trek and how the show's female fans kind of created the template for today's really influential TV fan culture. There's a fantastic piece about the dearth of women of colour in what's become an overwhelming glut of mommy memoirs. And, continuing with the birth aspect of genesis, we put together a package on the phenomenon of assisted reproductive technologies, and how they are impacting the reality of and policy around birth everywhere from LGBT communities to reproductive-justice organizations"

Find out more about Bitch or pick up an issue of the magazine from their website.