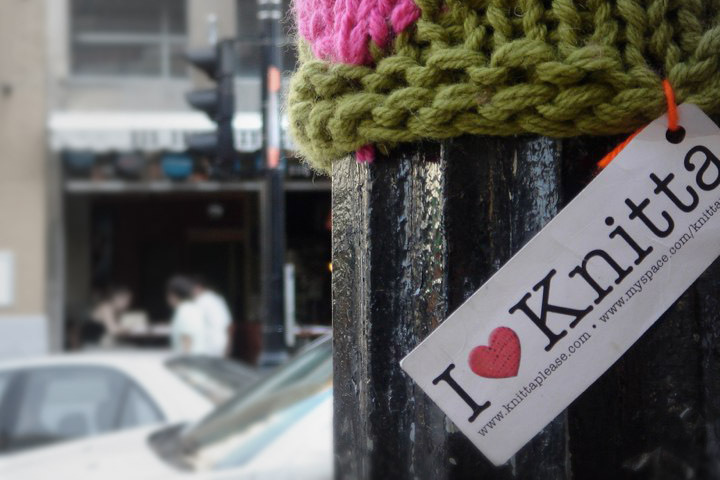 Banksy might be responsible for giving graffiti a good name but if the knitted and less permanent variety of graffiti is more your thing, you'll already be familiar with Knitta.

But if you're not, let me introduce you to this group of urban crafters... Formed in August 2005 by PolyCotN, Knitta is a collective of women from Houston, Texas who by way of knitting, 'tag' street furniture including lampposts, bridges, mailboxes - even car aerials.

And if you're lucky enough, you might have even awoken to find some part of your property enveloped in a Knitta-shaped hug. But who is behind this and how did it begin?

The sparky PolyCotN seemed to stumble across the idea by chance: "I wanted my door handle knitted," she says "I wanted to add some colour and when I did it, people would walk past and stop. So I decided to tag a stop sign and people would get out of their cars to take pictures of it."

Knitta takes to the streets at night in a gang or sometimes PolyCotN goes alone, armed with the necessary paraphernalia to get the job done. They work as quickly as possible during the dark hours and everything is planned to achieve maximum surprise for the recipient.

"The tag 'Knitta, please' captures what we do. It's kinda like 'you go girl!' and it cracks us up, makes us smile."

But has they ever been 'caught in the act?'

"Once I tagged a giant lamppost in Austin, Texas. I was so blatant with a 10ft ladder that people just don't assume you're doing anything wrong. It's not illegal. And in Brooklyn a cop stopped and asking me what I was doing. I said I was decorating the lamppost. He asked if I was using any paint and when I said I wasn't he just smiled and drove off."

It seems that unlike Knitta's spray-can counterparts (PolyCotN relates to graffiti artists citing that Banksy, 'blows her mind'), the world at whole is receptive to knitted graffiti and door knob cosies are particularly popular - they are easy to create and use up the odds and ends many people find in their wool stash.

"There's bigger benefits to it too - there's a quick satisfaction," says PolyCotN, "sometimes projects take too long and the unfinished projects mount up. But with Knitta, I can do a piece while I'm watching a movie - it's that sense of accomplishment. And it's something so tender, giving the gift of knitting - there's nothing hateful about it."

But with the news that lots of people have started to make money out of the gift of Knitta, does it make the group feel disheartened?

"Sometimes our work is taken and sold on eBay. We didn't mind people taking it but when they started selling it, it got annoying," PolyCotN adds. With this notoriety, comes fame and though the group tried to stay anonymous, it wasn't easy: "the most exciting moment of my life was when it was mentioned on Saturday Night Live and I wasn't prepared for it. There was Tina Fey (the presenter) talking about it and Tom Hanks was there. It was just super, super great and then the phone calls started," she says.

"I love knitting and wanted to do more - to knit graffiti and much bigger pieces. In the 3 years since the group started, it's amazing how it's grown. It's like a strange phenomenon and I'm part of it. I'm now writing a book, I just feel very lucky."

So while the States is not short of Knitta's beautiful handcrafted work, is there any chance the rest of us might get a look-in?

"I'm dying to go up to the UK and tag something there, I also want to do Tokyo and The Great Wall of China - it warms my heart! Maybe I could do like the Seven Wonders of the World. I'm really into large-scale pieces. I did a column once, it was 50ft in circumference and I had 18-30 volunteers to help me. It was breathtaking."

Breathtaking indeed. And did PolyCotN have any idea of the success that Knitta would become?

'It's weird. Sometimes I even question it myself. Did I really make this happen? But there was nothing like this before. I thought my 15 minutes of fame would happen because of my other ideas.'

Which goes to show that truly, anything is possible with a little imagination and a whole lot of style.

minette
“wow, i love it! i think i'm gonna have to start a liverpool chapter..watch this space, but shhhh..you don't know me <3” 7th October 2008

Tammy C.
“I saw this done in Chicago, outside the Art Institute” 22nd September 2008

Reused.Freegan
“So awesome, I need to start an Indiana Chapter--maybe I can be called 'Pearl2'” 16th September 2008

queenfairypants
“I feel like tagging something...NOW! But then you'll know it was me!