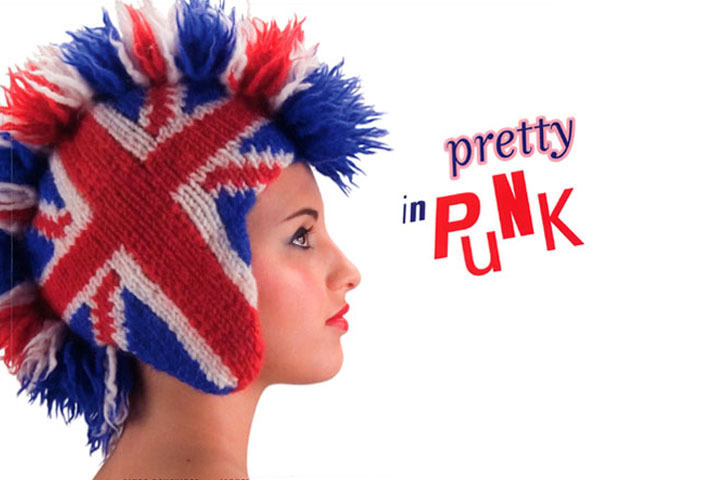 
It's just after Christmas and I'm thinking about how to spend the vouchers that I always get from relatives I never see, when I stumble across Pretty in Punk: 25 Punk, Rock and Goth Knitting Projects. Despite the emergence of craft books for a younger generation, there are still so few that cater to subcultural audiences - and it's even rarer to find one that doesn't look too difficult, so you don't have to be an expert knitter to have fun with it. 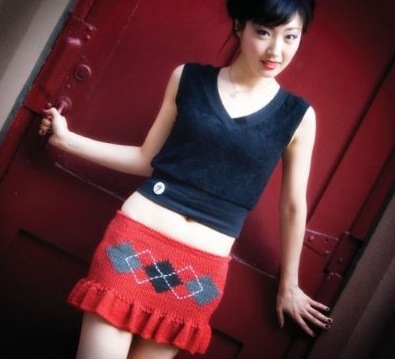 It's a laid-back book and when I spoke to Alyce Benevides, co-writer of Pretty in Punk and co-owner of Knit-Head, she was so friendly I could barely believe it. She works with Jacqueline Milles, who she met in the '80s when they were at high school together, and they formed a long-lasting friendship which has taken them through living together, studying together, working together at NYU's Tisch School of the Arts and now at NYU Film School, where - from what I've gathered - they're kept busy.

Alyce was brought up by a strict Catholic family, but they couldn't stop her punk nature, or her artistic talents. Getting involved in punk at a young age, she started crafting in that accidental way that most punks do - by ripping jeans and painting jackets. Jacqui was brought up in army camps in Iran and Germany as a child until she moved to the US as a teenager, where she began to find herself and appreciate a love for dyed hair, make-up and good music. She still knits everywhere; supposedly comfortable with the self-defence weapons that knitting needles can be used for. They claim that they were often called "freaks" when they were teenagers for being into punk rock, but like many they found that as soon as they left school no one cared any more - now they're admired for doing what they love and being proud to wear who they are on their sleeves - or, heads.

"They were often called "freaks" - now they're admired for doing what they love and being proud to wear who they are on their sleeves - or, heads."

Knit-Head itself started out when Jacqueline, who was taught how to knit in the first grade, passed on her talents to Alyce. They began designing items for their friends and family, as most crafty folk do, and eventually realised that the stuff they were making was actually pretty good. Alyce says that "Jaqui was making some ponchos, I was making these arm warmers. We showed each other our stuff, and thought, "Hey these are really cool."" But it was their trademark mohawk hat that really started things off for them. Jacqui says, "We just started maniacally knitting for a couple of months, making imaginative things that we thought would be fun to wear -- quick things that we could sell online. The Mohawk hat grew out of that. Alyce found inspiration in a couture Mohawk hat worn by Gwen Stefani in No Doubt's "Underneath It All" video. We discovered this particularly fabulous yarn and loved how it looked felted. Light bulbs went off. We designed the hat, felted the yarn for the "hair" and it came out like a Mohawk! 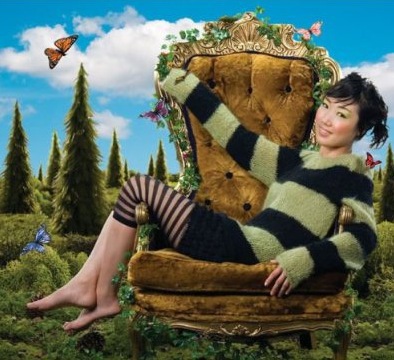 So Jacqui had the years of training; Alyce, who had started up a production business with her husband Rob, had the business know-how; and both of them had the creativity and ingenuity to come up with knitting designs that appealed to their '80s sensibilities, and that would sell well. The mohawk hats, which you can buy in "Punk's Not Dead" one-tone, two-tone, three-tone or "God Save The Queen", with a Union Jack on the side, sell for between $110 - $175 and can be done in huge range of colours. Jacqui says that the hats are for anyone who wants to unleash their "inner rock star" - and Alyce talks about how the hats sell best to people who don't mind getting a bit of attention. Then again, the woollen hats with side tassels and felted wool mohawks are kind of designed to be eye-catching. What's great is that they even have a range for babies, where you can buy both adult designs for tiny heads, as well as some milder patterns with bears and flowers on the side (if your baby isn't into the punk thing.)

In 2007 came the book, which contains 25 original designs, including the mohawk hat. They both made each item, wrote the instructions and drew illustrations, with Alyce's husband Rob taking the photos. Alyce explains, "We broke it up by body parts: for the head there are hats; for the neck there are scarves and chokers, etc. We also designed sweaters, tops and "bum" patches." The patterns range in complexity, with some tougher ones like the jumper, but they are designed to be worked up to - and there are patterns for the basic knitter, and anyone wanting to improve.

"We ask everyone who buys a hat to send us a picture because it is just so fun to see. It feels like a club."

This came about to a huge turning point for Alyce and Jacqui came in 2005 when Alyce waited eight hours to meet Depeche Mode at a signing - her favourite band since she was fourteen - and give them the Punk's Not Dead mohawk hats. On top of getting to meet her all-time favourite band, an extra surprise came when she saw Gore wearing his hat on stage - which he did for every night of the remaining tour. This was amazing free publicity for the hats, as it meant the pictures were in magazines and newspapers - Wikipedia's main picture of Depeche Mode even shows Gore wearing his black mohawk hat. Jacqui says, "When we went to see the band at Madison Square Garden, an editor from Entertainment Weekly saw us in the lobby wearing our Mohawk hats. When she went into the concert and saw Martin wearing his on stage, she talked to his publicist and got our card. We were braced for all of these orders to hit our inbox once the issue hit the news stands. But we got no response. Zero. A few weeks later, the one email we got was from Chronicle Books in San Francisco, asking if we wanted to author a knitting book. For the next four months we walked around like, "Somebody, pinch us." Other celebrities that have been spotted wearing the hats include Madonna and Guy Ritchie.

The girls claim that their designs were inspired by the likes of Vivienne Westwood, John Galliano, and the originality of punk bands throughout history. And the pictures from the book definitely look like something that should be part of a high-scale fashion show; they have that impressive mix of looking fashionable, but also completely wearable, with bags, wrist cuffs and even skirts for the more daring knitter. Oh, and they also manage to be punk without having to emblazon anarchy symbols on everything, which is great news. The community feel of the book and the people is amazing; Jacqui says that "We ask everyone who buys a hat to send us a picture because it is just so fun to see. It feels like a club." You can check out the Gallery online, which even shows some of the adorable baby hats.

And the thing that makes this story so great? It's about two people doing what they love. Alyce says that she has always heard people say, "You'll be happy when you are doing something you love. And it is absolutely true." Jacqui describes it as a hobby that took on a life on its own; "We were just so happy when we were selling enough hats to make the yarn pay for itself. Also, we are not making anything that we don't like - it's all been fun. It's totally a win-win situation." It's thanks to the re-emergence of craft culture that the book was a possibility for these guys - although it's great that for anyone who can't knit, their awesome hats can still be bought online.

"Have at it! All you need is two sticks and a ball of yarn!"

More information about the book Pretty in Punk and the hats can be found at their website, www.knit-head.com, and the book can be found in Waterstones and other big book stores, as well as on Amazon for some pretty reasonable prices. Also check out their other book, The Sock Knitting Kit, which comes with needles and wool - it may not be punk but it still has some great designs if you want to get into sock-making. As they say on the website, "Have at it! All you need is two sticks and a ball of yarn!"

You can find out more about punk knitting or pick up a copy of the book at Knit Head.

Dieneogoth D.
“Hmm somone needs to do there home work out side of school LOL last time i checked Punk wasn't prep!!!!” 12th May 2011

MERY P.
“i ordered the book yesterday! i have seen some patterns from it. and it looks awsome! i cant wait to start trying some of it out!!!!!!!” 30th September 2010

DarkAshHurts
“I wouldnt really consider their things "punk" imo.
But i'd love one of those hats! And i like that green&black sweater. Very grunge. <3” 15th September 2010

Squizita
“Those designs are fabulous! I'm deeply coveting the stripy jumper - might have to re-learn knitting now!!” 21st August 2010

Ami
“i really like the skirt! i wish there was a crochet tut for it that would just make my day!” 15th August 2010

Jet H.
“wooow you made beautiful things on your sticks;-D
i like them a lot and they are soooooo cool the designs!!!!
i like to make one;-D” 15th August 2010