Marcella Puppini talks about her music, inspirations and fashion. 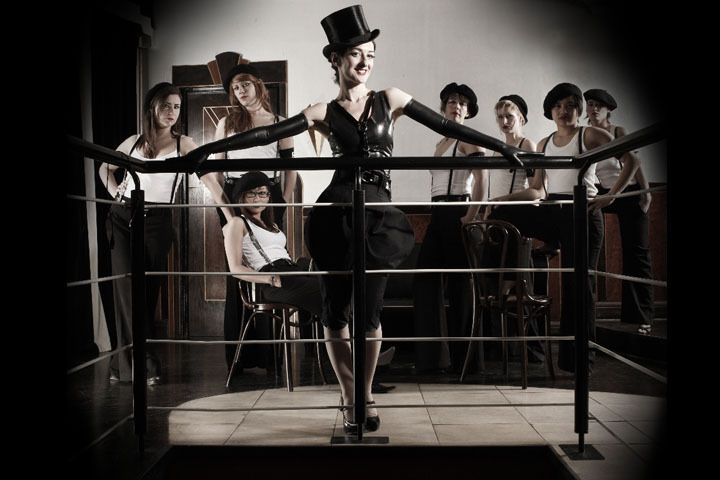 
Please describe your music?
The music that I write is a little bit difficult to categorise and I have had musicians try to put labels to it. The laziest label would be... no I'm not going to say it, because it just doesn't work. It's something that is a little bit new but weird because it's done with totally old acoustic instruments and classical instruments - inspired by the art school rock bands of the 1970's and a touch of 1930's Berlin. It's called cabaret, but there is nothing burlesque and there is no comedy about my music, songs are based on stories written like pop songs, with a verse and a chorus. They aren't sung like pop songs but they aren't sung classically either. I have been compared to a cross between Claus No-me and PJ Harvey.

Who are your musical influences and inspirations?
I am a massive, massive fan of Nick Cave, I love his dark story telling. I also love PJ Harvey, she has the same darkness but more suggestive. Her lyrics are much more like poetry. I love Tom Wait too and a whole lot of other stuff. I'm crazy about art school rock bands - but I also love Opera and the Jazz of the 1940's.

What's playing on your mp3 player at the moment?
I've been listening to David Bowie, Anthony and the Johnsons, The real Tuesday Wells, PJ Harvey, Joanna Newsome, Roxy Music, and a lot of David Bowie.

Where does the name "Forget Me Nots" come from?
The first time I started the Forget Me Nots was 2005. It actually started by accident, I was working as a musical director and arranger on a show by the Whoopie Club, it was a really extravagant knees up in a cockney style show. At the beginning of burlesque- it was underground, it was a collection of all the most prominent burlesque artists of 2005, in London and it was all tied together by this Edwardian storyline, so I put together an all girl orchestra, as the background music for the show and I was singing in the show.

The "forget me nots" is the idea of having a very sweet and old fashioned name for a band. When I decided to revive the band in 2007 and make it into a proper band, I just loved the name - it is really put in quite stark contrast to what the band really is - all girls and the name is cute but there is nothing remotely cute about any of the girls or the music, they could be called aggressive in a sexy way and are always in charge.

Where did you meet everyone?
I met most of the girls at the college I studied at but I didn't actually know them. I studied composing at college, so I went to my composing teacher and said that I needed to meet some attractive, cool, female instrumentalists and he said "not a problem", as he reeled of f a list of names. I had to contact a few girls and not all of the girls were up for it. In fact, a couple of girls said they couldn't possibly - "the violin would be ruined" types.

I was looking for a particular type of girl and I have found the perfect, perfect girls. They are all amazingly trained but they have also been around and are not afraid of anything. They are super cool, not all the girls are from Trinity, but some are the girls I have met through the girls at Trinity.

How do you get ready for a gig?
We just chill out and talk a load of rubbish. We had a week in Berlin and we had 6 nights in a row, so we had our own dressing room. We made this thing of going into the dressing room, having a brandy and doing our hair and makeup. Everyone borrowed everyone else's make up - similar to getting ready for a girls night out.

I'm more the kind to starts projects, like a knitting project. I haven't made anything from start to finish in a long time, so I have these little swatches, waiting to become a patchwork blanket. I also studied fashion and to be a designer. I used to make clothes but I don't anymore. I still customise stuff and I love to look at trimming shops - I love things like that.

What do you like to do?
Knitting and customising clothes. I wish I had the time and I was good enough to make clothes or even just stuff in general.

Who are your style icons?
David Bowie, Kate Bush, Joan Crawford, Roxy Music. I want to say Lady Gaga because I think she is wonderful but she is a little bit too obvious, and also Rhiannon as well.

How would you describe your style?
Somebody gave me the most fantastic quote the other day, they said I looked like a film director from outer space. I like the sci-fi version of vintage, but I don't particularly like vintage. I like vintage through a modernistic eye, so if you can imagine similar to Blade Runner but more sci-fi! The outfit I just made is metallic leather riding breeches, in the style of 1940's Nazi officer like Jodhpurs, with a top and shoes in the same leather, with a little bugle boy hat. I then have a leather harness, which is a little bit S&M. I'm not into the practise but I do like the look - do you know the movie the Night Porter from the 1970's? It's that kind of look - the movie is harrowing but the styling is fantastic.

Where are your favourite places to shop?
Well I do get given stuff from Vivienne Westwood, as I used to work for her. I can't spend money on Vivienne Westwood because it's too much. I have got tired of vintage shops because they are over-priced and often only sell rubbish. I used to like vintage but now I'm not so keen. I like to have things made for me or get given, or I just go to Top Shop and then make it my own.

Describe your favourite gig?
A few years ago, before I studied music, I put out a club track with a DJ at a club called Revolution. I did a PA at the Bridge at Brixton and I think I was the only woman in the club that night. 2000 gay men and on stage, including these two muscle-y black guys wearing nothing but white underwear and doing sexy poses. It was a brilliant gig and when I came off stage, a drag artist with ten naked guys with erections had been fluffing each other off stage. That was the best for the surreal element.

What 3 people would you invite to your dream dinner party?
Um, Vivienne Westwood because she is absolutely bonkers, Tom Waite and Nick Cave as well, that would be quite good conversations between us.