Win a signed copy of the Book Of Awesome from blog 1000 Awesome Things. 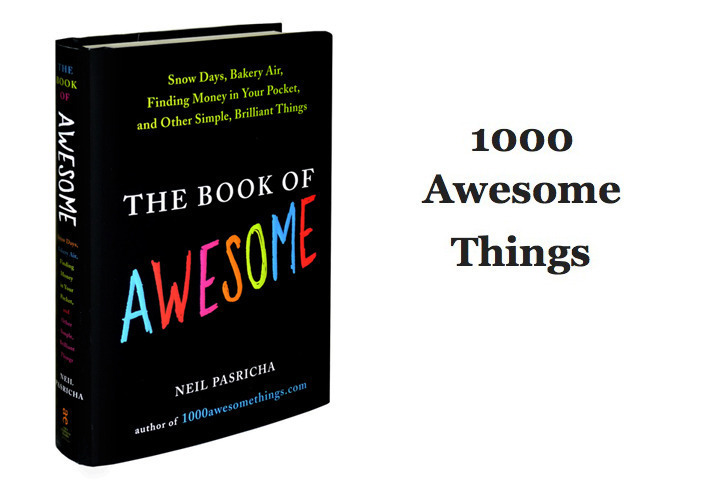 
Bringing smiles to thousands of people on a daily basis, Neil Pasricha founded the award-winning blog 1,000 Awesome Things, where he posts one awesome thing in life every weekday. He explains, "Awesome is just an escape from the sad news and bad news pouring down everyday. It’s a place where global warming, terrorist threats, and health care debates sit backseat to warm underwear out of the dryer, the cool side of the pillow, and popping bubble wrap.” 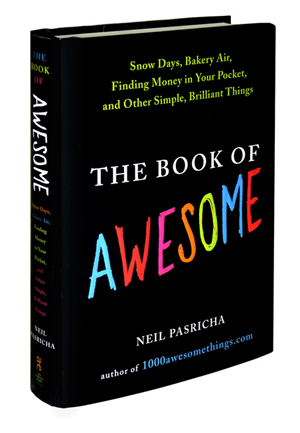 Launched on June, 2008 and currently at #442, here are a few examples of awesome things:

The blog has now been transformed in to a gigantic Book Of Awesome and we've got two autographed copies up for grabs.

momoevergreen
“Getting home from a long day at school, in the middle of winter and taking a hot shower and then curling up in the corner and watch the snow outside your window as you let your creativity explode on a piece of paper.” 14th August 2011

soupsoupsoup!
“Prussia
Naw, just kidding
The "Haha! In your face, hackers!" feeling when you rid your computer of a virus.” 3rd June 2011

shelby
“when your having a horrible day and all of a sudden for no apperent reason you
here from the person you really like and it makes everything so much better even if its a simple hello ;}” 24th May 2011

PetiteElefant
“Having a heartfelt conversation with that person who isn't perverted, mean, or judgemental and loves you for who you are despite looks. Then making him laugh his hearty laugh that's as warm and filling as hot soup when you clumsily trip over something and fall in the dirt, pulling him down with you to the ground, and you laugh some more together. Best friends. (: ” 5th April 2011

gisselle b.
“playing in the rain!

Maladignia
“The first sniff of woodsmoke out of a chimney on a sunny autumn day, when the leaves on the trees are turning yellow and red.” 23rd September 2010

HannahForMyValentine<3
“Never knowing what is going to happen next,
The thrill of surprise about the day/week ahead

HannahForMyValentine<3
“Never knowing what is going to happen next,
The thrill of surprise about the day/week ahead

Alexis_Orifiel
“The smell of freshness after the rain

sunshine
“licking your finger tips after eating a bag of cheetos

Spobret
“My most awesome favourite thing about life right now... three generations of my family laughing and crying with releif when i told them my chemo is working and the tumour has shrunk into non-existance ^_^” 13th September 2010

melanieeatsghosts
“Watching a movie with your dog

Jasmin S.
“The changing of seasons between summer and autumn I just love how the leaves change colour” 8th September 2010

K-Li
“Just got back from an incredible trip to the mountains and had to say - it's truly awesome to sit beside a huge, still lake in the dark, upon a flat rock and look up and realize that out there you can actually see the stars and discover that the milky way does exist.” 6th September 2010

Lorie J.
“The smell of your Dogs fur on the top of her head when she cuddles up close to you. ” 6th September 2010

Janet P.
“My grand daughter telling me my wrinkles are beautiful!” 6th September 2010

rosey w.
“when you laugh cause you got such a cute text from a friend and you don't care that your sitting by yourself anymore” 6th September 2010

Shazziiee
“Standing out in the rain and the sun watching the rainbows fill the sky with beautiful colours!” 30th August 2010

Taylee
“the person you like texting you first, because then you know that they were thinking of you <3
going for a walk in the rain/puddle jumping =)” 29th August 2010

Hollie W.
“my favorite things about life is getting home to do some making and baking.” 27th August 2010

CelticHippo
“Being curled up on your sofa with a mug of hot water with a slice of lemon, and just sitting for a short while before you start your day” 27th August 2010

Jess S.
“Getting to wear sneakers, jeans and sweaters again after an incredibly hot and humid summer!” 26th August 2010

lemonblossom
“The feeling of a crisp fall breeze blowing through my hair.” 25th August 2010

Kyra C.
“Waking up in the morning with your pet nuzzled against you.

jolene r.
“creating a giant splash in the pool with great friends on a warm summer day” 24th August 2010

Lucy A.
“When the bath water turns red after you've just dyed your hair

MissCoda
“In bare feet feeling the sand squishing up in my toes.” 24th August 2010

Kata B.
“Watching the sun coming up after a fantastic night

Julianne O.
“Walking on fresh snow and pretending it is clouds” 23rd August 2010

LizzyLovesSatan
“going outside on an overcast or rainy day and blowing bubbles!” 23rd August 2010

Abbi L.
“What I think is awesome about my life is that I have a little sister. She's adopted and she's the most fun little thing a person could have. ” 22nd August 2010

AiLy T.
“When people you were scared you'd lost touch with come back into your life like they'd never been gone.” 22nd August 2010

Squizita
“Turning your phone on after a bad day at work, and finding a message from a (you thought) 'long lost' friend saying they are back in town.” 21st August 2010

Jessica Tracy
“Curling up with your favorite book while waiting for peanut butter cookies to bake. That's awesome.” 21st August 2010

IanAllyn
“that look of pure joy and satisfaction on your dogs face when you find that one perfect spot to itch.” 21st August 2010

Sneeuwwitje
“Losing yourself in the soft fur and purr of your cat after a hard day.” 20th August 2010

jojo m.
“walking in the rain without an umbrella and your i-pod turned up on max” 20th August 2010

Lani Azura
“Finding that that one old movie you love that you lost.” 19th August 2010

OhMyStars
“going up in a plane, looking out the window, and watching the little toy cars speed down the road.” 18th August 2010

HollyPolly
“When the first pair of jeans you try on fit you like a glove.” 18th August 2010

Rhibi
“Taking your first bite of food you have just bought/made and fully realising it is the EXACT taste you were after at that moment. ” 18th August 2010

Meredith O.
“The sound of a kitten purring near your ear as you fall asleep” 18th August 2010

WitchArachne
“Coming away from an argument feeling like you BOTH won.” 17th August 2010

lisa m.
“going to sleep knowing that you survived for that day” 16th August 2010

Bryony
“The times that a pin goes into the right place, first time and you HAVEN'T pinned your finger to the fabric.” 15th August 2010

Tanana :)
“Staying up all night so you can enjoy the hours when everyone else is asleep then sleeping when everyone is awake; 5 am is about the most beautiful time of day in my little piece of New Jersey. ” 15th August 2010

Britta J.
“the satisfying scratch of the hairbush on your scalp as you brush your hair

ray of sunshine
“Sitting on the beach in the sun and knowing you don't have to do anything or go anywhere all day.” 15th August 2010

imazombie~
“walk with your boyfriend when is raining, don't caring about to get sick” 14th August 2010

Kaylee G.
“Finally realizing you don't care what others think, and decide to start being yourself.” 14th August 2010

Scarlet-Begonias
“The sparkle and beauty of an untouched blanket of snow. <3” 14th August 2010

Emily
“having someone tell you that the thing about yourself you hate is one of the reasons they like you.” 14th August 2010

Kitty
“snuggling up with a big warm blanket sipping on hot cocoa when there is a cold winter storm outside.” 14th August 2010