We chat to Sia, the happiest, craftiest singer on tour with her DIY yarn-bombed set. 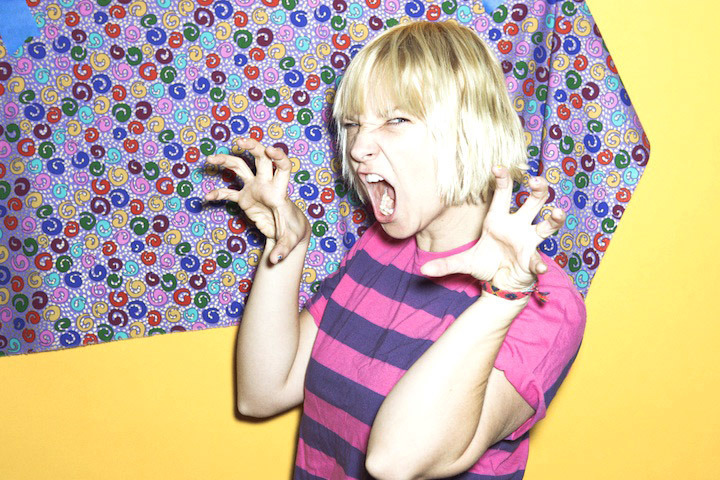 
Australia-born singer Sia Fuler is fast becoming a household name and she's winning hearts everywhere with her warm, vibrant and down-to-earth attitude. I caught up with her in London earlier in the year to find out about her music, her passions and what makes her happy.

Looking nervously down at my list of mundane questions, I start the interview, sympathising with Sia that she must be asked the same questions again and again. "Is it the one about Six Feet Under?", she jumps in. I shake my head, feeling slightly relieved that it isn't. "The ones I always get are "the last album's really slow, this album's really fast. What happened?". And I always get "how did it feel to have your song in Six Feet Under?" We're actually making a documentary about the promo process, so we're gonna have different people in different parts of the world asking me the same questions. It's going to be an expose on how crazy-making it is!".

Constantly smiling and laughing in between questions, Sia puts me at ease and I move on with what I fear is another boring question about reports she may be quitting the music industry. "Oh, I'm not bored of that question, I love talking about that because that's real, you know? I'm not necessarily gonna quit but quit being in the public eye. This will be the last record that I ever tour and promote."

"Having people say mean things makes me want to drink alcohol or take drugs, it makes me wanna self sabotage!"

"I still wanna make records but I don't know if I'm the right person to be a front person. I'm too cuckoo. Having people say mean things makes me want to drink alcohol or take drugs, it makes me wanna self sabotage and so I just don't know if this job's healthy for me. There are some people who crave it, some people who have good boundaries in place, and then there are people like me who get a taste of it and then want to sabotage their career immediately. I had a break down a couple of years ago, but before that breakdown I had really sloppy boundaries - hugging fans, going for beers, writing to them... and a lot of them are normal, awesome, great people - just regulars like us - but there are some new fans who are cuckoo and it's scary because there are some fanatics. The performance and the album isn't enough for them, they want a piece of me. I just thought fame would mean my Dad loving me more! I didn't realise it would be this anxiety filled roller coaster."

" I just thought fame would mean my Dad loving me more… I didn't realise it would be this anxiety filled roller coaster."

Sia's song My Love was featured on the latest Twilight soundtrack."I am so unbelievably excited to be in such fine company for the Twilight soundtrack, Oli and I never imagined that what we created in our living rooms would end up a part of such a massive project… woohoo!"

"It's my favourite", claims Sia about her latest album We Are Born (produced by Greg Kurstin, a noted LA producer who has worked with Britney Spears, Kylie and Red Hot Chilli Peppers). "I think that's what everyone says about their most recent. I think like anyone who has a job, you hope what you do most recently is your best work because we all want to grow as people. This is my favourite album because I love it and it's been waiting to come out for 5 years. We haven't finished making it yet so I've no idea when it'll come out. I thought we were gonna film today but you're off the hook, tomorrow we'll film again."

Some dates on the recent tour needed to be pushed back until the record is released. "I'm with Sony now and it's the first time I've ever been a priority at a record label, so I do whatever they say! They thought they needed more lead time for more press and strategising and marketing. All stuff that normal people like us don't know that goes on behind the music industry doors. I thought when I first started that if you had a good song, you would have a hit and then you'd be a star! I had no idea that promo equals album sales. So much strategising goes on and it's not real. That's why the internet is so good because you can find music that is still great but hasn't necessarily had the budget that I have right now."

"I thought when I first started that if you had a good song, you would have a hit and then you'd be a star! I had no idea that promo equals album sales."

Sia continues on to talk about her other passions for crafting and creativity. "I guess my favourite hobby is painting. I use nail polish on glass - that's my medium! Most of the time I like to paint and it's abstract and really small pointillism stuff. There's also no technology you can see in my house because I've covered it in old French edging, linens and ribbon, so my DVD player just looks like some old French pillow. My Wii and my Teevo (Sky plus box) is covered in embroidered napkins and the television is framed too, so the only thing you can see is the screen. All the cables in my house are wrapped with wired ribbon around because I don't like the way technology looks - so my house is well crafty! I tried to make my set (for the tour) kind of like how my house is, so I yarn bombed the entire set. I was inspired by Alison Mitchell and Magda Sayeg because they yarn bomb cities and do art installations with granny rugs and afghans, so I basically stole the idea from them!"

"I want to go to rehab just so I can have a meal time and an early night."

Sia concludes by revealing the things in life that make her happy. "Hanging out with animals. The happiest day of my tour was when I got to visit the Minneapolis Animal Human Society and I got to pet every single dog in there who was waiting to be adopted and it was just the best day so I think I'm gonna work with animals, that's what I wanna do. That's my jam. I'm just so over touring now. I want to go and be with my dogs. I'm tired, I want to go to rehab just so I can have a meal time and an early night."

SaveMeSanFrancisco
“I saw her in the NBC show The Voice! LOVE HER!” 10th August 2011