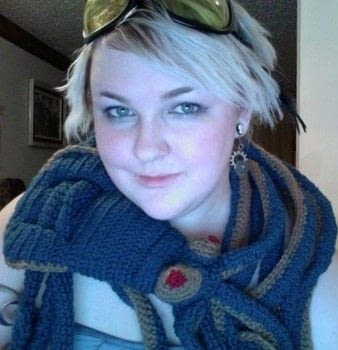 because everyone needs a giant squid hanging bout their neck...
I saw a picture of a squid scarf floating about the internet... so i decided to give it a go... i call him Nemo, as in Captain.

please note that i am not a terrible accomplished crocheter... as such, this was very difficult and took me for bloody ever. you may find it easier... and faster

Ok... so been meaning to how-to this for a while... trouble is i trial and error-ed this one to death! I had no pattern and kept having to undo and redo bits... but here's the basic idea (p.s i recommend you read all of this and then dive in because you will surely recognize my countless mistakes and avoid them!):

I started with the body and chained out around thirty-two in the blue. I did several rows of the blue until i had an area big enough for the eyes. It's kind of a tube shape. Then I very slowly started expanding the body. Adding about three stitches per row.

Begin bringing in this side pretty dramatically. After about four or five rows, the body should be done. Stitch the top together.

Run a stripe of brown down the edge of each fin.

Run three rows around the body just above where the eyes will go.

For the eyes. Crochet little red circles then crochet brown around them until they are the size you want. Finish the eyes with a row of blue and use a slip stitch to attach them.

I put a small amount of stuffing into the body... totally optional

For the two tentacles: fold the first couple inches of the body back and run your yarn through a stitch inside the body. chain about five stitches and slip stitch into a loop (I anchored this loop a few places up inside the body). i crocheted around and around without turning rows until the tentacle was the length i wanted and then added stitches at two opposing sides to get the flattened spade shape. I decreased the stitches slowly and ended in a point.

for the eight legs: beginning at the back seam of the body i made a single crochet in the first loop then two crochet in 2 and 3 and then one in 4. the reason for this madness was that i wanted the legs six stitches wide but only had 32 loops to work with... six times eight... you do the math... this is one of the reasons you might want to do yours differently than me! okay, so after doing the blue in all of the legs i went back to the first and started the brown. I just single crocheted a sort of border (rounding over the end so that it would draw in) and when i got up and down a whole row i chained out a few (anchoring to the nearest tentacle as i went) and then went back up again but stopped at the end this time. Then i pulled the sides together and slip stitched the leg closed. Repeat seven more times.

(someday i will make another and properly document my process... then i will post a proper how-to... until then... smile!)

Crochet Hook 3 Yarn (1 of each color)

Pitufa posted this project as a creation without steps 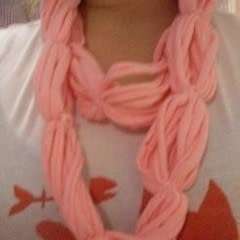 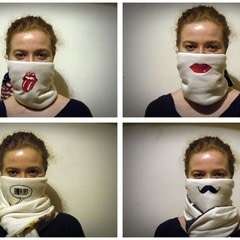 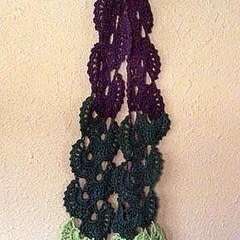 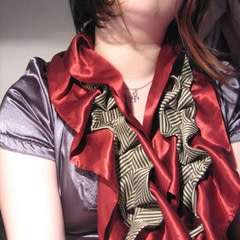 Suki Chan · Edgewood, Maryland, US · 8 projects 23rd October 2012
thanks sooo much!!! ill post a version when i make mine (: ill once again be the freak who crochets at school!!! huzzah!
Reply

Pitufa · 4 projects 12th October 2011
well... i slip stitched my 32 chain to make a loop then chained one and turned. at the end of each row i slip stitched back into the first stitch of the row and chained one. this made a bit of a seam up the back of the squid.... this is one of the tactics i will most likely revise on my next attempt.
Reply

Alexandra C. · Saginaw, Texas, US 10th October 2011
ohkay. so,i know youre working on a proper pattern, but im very impatient. lol when you chain the beg 32 sts, do you join em or turn?
Reply