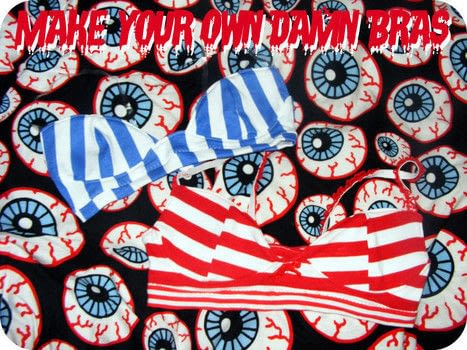 Tutorial:: Make Your Own Damn Bras
Yesterday I got sick of waiting to go to Spotlight to buy a good bra pattern, I decided to DIY! This is good if you do not have a very large bust. I'm a 12C-ish, and this tutorial shows you how to make a basic padded bra. You can easily add underwiring, which - when I get some - I will add to this tute on how to put that in as well.

I am going to buy a bra pattern, and give that a test run too, the most widely reviewed one that seems to be good is Kwik Sew 3300, so hopefully I can pick that up tonight as well as some bra-making supplies.

You're probably wondering why on earth I am making my own damn bras? Well part of it is because of the Self-Stitched September pledge I took a few days ago, and part of it was because I was so intimidated by making my own bras I had never attempted it before! Knicker, ha, old hat. Bras? EEK! Well not anymore!

Please note:: there will be no shots of me actually wearing these bras! I took a few, then decided it looked alot less like me modelling a bra I made, and more homemade sexy photos D:

This is the quick n dirty version. I'm going to do an in-depth tutorial of fold over bands ((because I use them in everything)) and more about the back clasp, but for now, it's not hard to wing it from where I leave off ;D ((sorry!))

so.unique · Calgary, Alberta, CA · 11 projects 13th April 2013
wicked cool!ill be trying this, ive got bras coming out the wazoo but only wear like 2 or 3 of them haha, also i have this band tee i dont wanna give up so once i figure out how to do it properlyl, ill be making a bra of it!

milliemartine · Grimstad, Aust-Agder, NO 20th January 2013
you can also sew it shut in the back, and install a jacket zipper in the front tp close it

the little crafty mermaid <3 · 5 projects 26th January 2011
I love this! As I'm a 30A-32A (but really like AA), this will be nice as it's hard to find my size, me being so small and all! I was actually thinking about being Ariel for halloween next year, so maybe I will use this for the "seashell" top