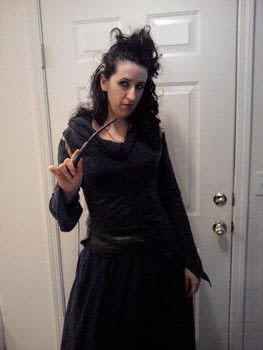 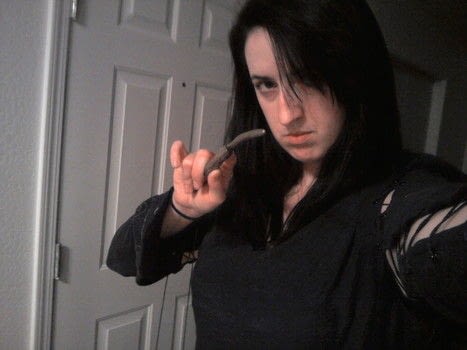 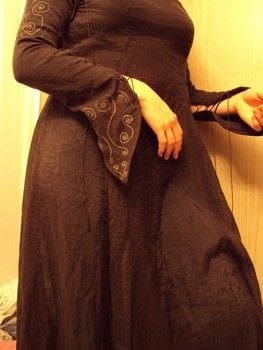 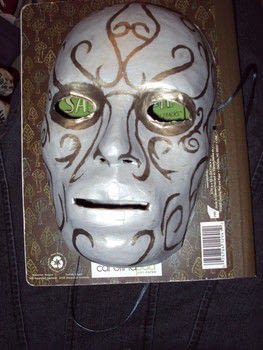 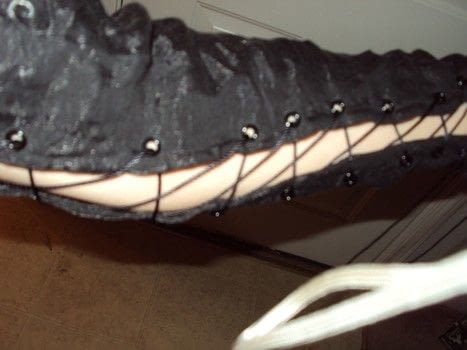 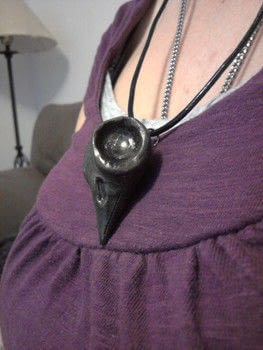 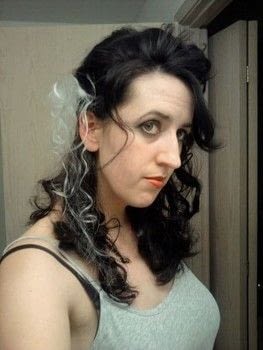 I killed Sirus Black!
I spent the three days before the movie throwing this together, spending every second I had between work and babysitting, and the little bit of sleep.

I bought the fabric back in September, had it cut out, but hadn't worked on it at all.

I am really happy with how it turned out. I used a basic dress pattern and sort of just guessed with the rest.

For the sleeves I cut some sleeves off an old long sleeved shirt I had accidentally bleached (black shirts and bleach don't mix) and then laid it out on the black fabric and measured from the wrist to my middle finger to make the point on the sleeve. I then sewed them together, added grommets and laced it up with a thick crochet thread.

I attached the rest of the shirt to the inside of the dress, the fabric was very thin, so the shirt lining the top took care of that, and for the bottom half I sewed another layer of the black fabric to the bottom hem of the shirt.

Originally I was going to have a hood, but it didn't work out the way I had wanted, so I took a piece of scrap fabric and sort of just tacked it in along the collar, it could have been better, but in the 5 minutes I did it in, it worked really well.

The Corset was the same material I used for the last one, doubled up, and stitched together, then laced together with the same crochet thread. Just so long as I was standing it laid flat, but as soon as I would sit down it would bump and bulge. Would have been nice to have used real leather.

For my hair I curled it, and used a whole can of hairspray (the curls still fell out by the end of the night). I used a small claw clip to pile it up on top of my head and then a bunch of bobby pins to pin the rest up around it. I cut some white hair off a wig and bobby pinned that in too to create the white stripe.

The mask was incomplete, I just didn't have the time.

The wand I used the same one from last year, but added the handle, which was polymer clay, and painted it all using a mix of several colors.

I did also have the dark mark tattooed(sharpie!) on my arm, along with Bellatrix's Azkaban number on my neck. But I forgot to get pictures of them. And the neck one was nearly impossible to do myself, in the mirror, so it did not turn out so well.

Best night ever, My costume was loved by all! I was even told I was epic, and made all three local news shows(woo?)

Craftie Auntie posted this project as a creation without steps

Craftie Auntie · Medford, Oregon, US · 55 projects 21st November 2010
Witchy Rachie, At least there is one more premiere that you'll have the chance to dress up for! And thank you!

Joy, Oh thank you so much! I have always loved HBC, and she pulls of the Bellatrix insanity so well. By July I think I will rework a few bits of the costume, fix the sleeves, add the silver swirly detail, and get lots, and lots of pictures!
Reply