Top tips for hosting your own beer tasting. 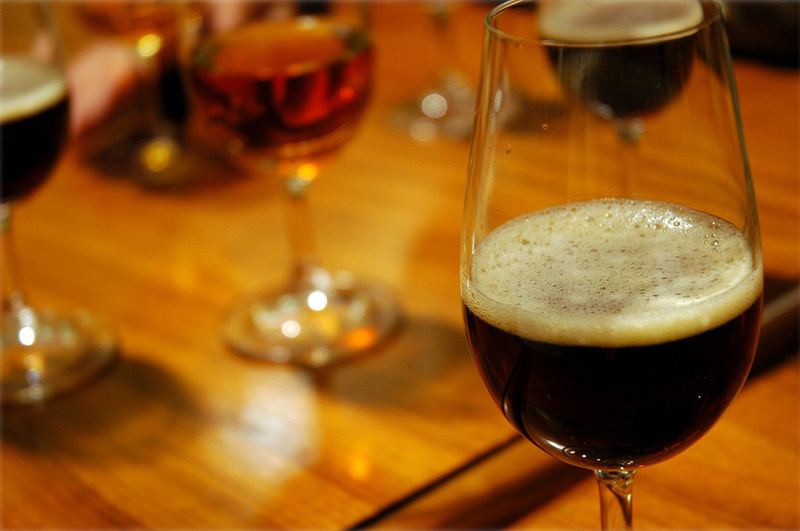 
Hosting a beer tasting can be a lot of fun, and it's much more than simply getting together to knock down a suitcase of mass market swill. Just like a wine tasting, a beer tasting is a great way to experience new styles, expand your palate, and have a great time talking about and drinking good beer.

So, what's the big deal, you ask? How hard can it be to taste a bunch of beer? Here are a few tips that will help get you on your way.

There are a lot of ways to organize a beer tasting, but a few certain models seem to work especially well to make sure you and your guests get the most out of the event.

What Beer To Drink:

The first thing you'll need to decide is what beer you'd like to drink.

One of the more popular approaches to setting up a beer tasting is to do a "horizontal tasting", where the same style of beer across several breweries are sampled. For example, you might try six different pale ales from different breweries. This is a great way to learn a lot about a particular style, because you can see how various breweries approach the same type of beer, and take note of the differences and similarities.

To learn more about beer styles and what they taste and smell like, visit www.bjcp.org and read the style guidelines for each beer style. (Nerdy? Yes - but nerdy is chic.)

Another variation on the horizontal tasting is to spotlight a particular brewery. In this format, you'll want to collect as much beer from one brewery as you can, sampling across all the styles they brew. This works particularly well if you have a local brewery or brewpub with several styles available.

If possible, try to select a brewery that has at least four styles, in order to get a good idea of that brewery's character.

A less common, but very interesting model of beer tasting is the "vertical tasting", where beers from different vintages are sampled. Different vintages? You bet. Just like wine, many styles of beer can be cellared for several years.

Many of these styles, such as Barleywines, Imperial Stouts and Porters and Strong Ales, are vintage dated with the year stamped on the bottle (don't call this a "born-on date", lest you be smacked by a good beer drinker).

The advantage to a vertical tasting is the ability to see how a beer has changed over time, or how the brewery has changed the recipe. Although these require quite a bit of patience to save up the various years' offerings, this format of tasting is one of the most enjoyable you'll ever do.

Once you've decided what format your beer tasting will take, it's time to sort out the details.

What glassware will you need? Pint glasses work for most low alcohol beers like pale ales, IPAs, brown ales, stouts and porters. For the higher alcohol beers, such as those in a vertical tasting, you'll need to make sure you have some brandy snifters on hand to really appreciate the flavors and aromas in the beer.

Also, who will buy the beer? This is open to interpretation, and you have a few options. The host of the tasting can buy all the beer and have the participants contribute a set amount of money each to cover the cost.

Another interesting idea is to have everyone bring a couple beers of their own, according to the type of beer agreed on. This has the advantage of creating more variety, plus you won't have to worry about the non-paying deadbeats of the party.

Lastly, decide on a venue, find a place to store the beer at the right temperature (anywhere from 45-55, higher for beers with more alcohol), and start tasting! You may wish to keep some crackers or bread on hand to cleanse your palate between beers as well, and some cheeses selected to pair with the beers can also bring another layer of fun to the experience.

One thing to remember: hosting a beer tasting isn't about drinking as much as possible. In fact, if you or your guests find yourselves getting too buzzed, slow down and eat something. The idea is to taste the beer, and without a clear head that's tough to do!

Hosting a beer tasting is a great way to meet people, learn a lot, and drink some fantastic beer. Don't let the apparent snobbery fool you though, this isn't about being an upper crust socialite, it's simply about tasting and learning the most you can about beer - and everyone can appreciate that.

You can find out more about the wonderful world of beer on Justin's website Davis On Draft. (Photography by Lauren Hewings, Ben Harris-Roxas & Black Glenn).