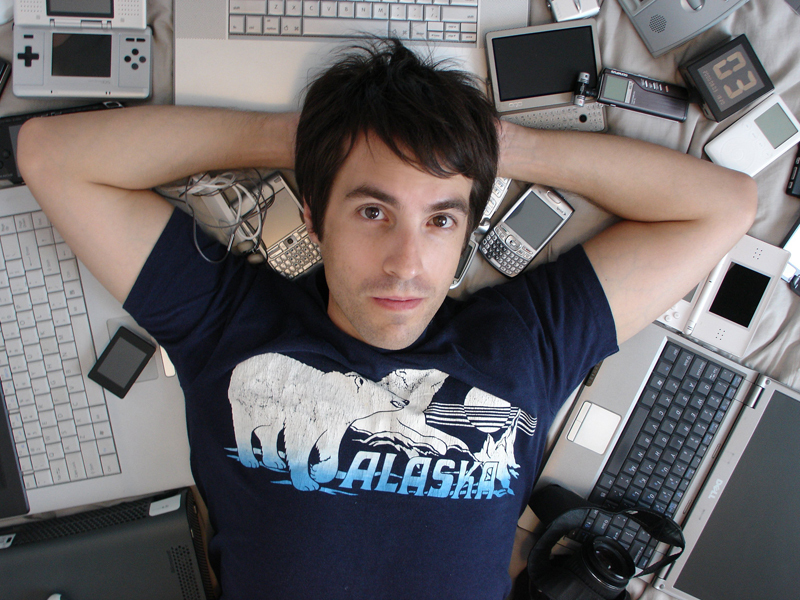 
After co-founding the most successful technology blogs on the internet, Engadget's Peter Rojas has just launched his latest venture. A partnership with Downtown Records (Gnarls Barkley, Art Brut, Cold War Kids), RCRD LBL offers completely free music downloads from emerging and established artists. Snippets spoke to him about his blogs, music and more...

"I started blogging in the summer of 2001. I had a friend who was an editor at Wired and he had just started a blog. I'd just lost my job with Red Herring (tech mag). He said 'You should be blogging, just to keep your voice out there'. So I just started a personal tech blog that nobody read. It ended up snowballing from there, about a year later I started Gizmodo with Nick Denton, and then in 2004 starting Engadget."

"It's weird - 10 years ago I would have been a random dude at a party talking about stuff that noone cared about."

"I've written about 6200 blog posts at Engadget. Typical day: get up about 6.30/7am and go over the tips and news that had come in overnight, proritize them, and write up posts. I quickly realised it required a lot more people to do the job right and ended up bringing in new people. You need a division of labour to get things done, but it's a small, non-heirarchical organisation, everybody needs to do a bit of everything."

Liveblogging is a more recent phenomenon, as bloggers relate events and product announcements in real time, from mobiles, PDA's and laptops. "It reminds me of sports announcers who do the play by play. It's giving people who aren't at the event a way to participate in it, a way to look in and find out whats going on. Something like Steve Jobs announcing a cellphone is a huge event and people want to know about it instantaneously, not the next day in a newspaper. You've got to find a balance of offering the information in an unfiltered way; in some ways we're transcribing, but you also want to offer the right amount of perspective, or commentary to add a little bit of depth. You don't have a lot of time to analyse or reflect and interpret, later on you can think back about what happened."

1 "Recognise why you're blogging - people blog for different reasons. Some people do it because they want to become an expert in the field, become a voice in their field. A lot of creative profs sharing their work. Some people do it professionally, others to share their life with friends and family. Sometimes it's a mistake to limit yourself to one subject."

2 "If you're going to blog about something specfic - make sure it's something you love and are passionate about. If you try to be cyniucal and say 'It looks like there's a lot of money blogging about cars, so I'm going to blog about cars', you're going to have a terrible blog that nobody is going to want to read. There's so much choice out there - so it's the blogs written by people who genuinley love and are excited by the subject are the ones that do well. A blog is someones perspective on the world, and when that passion is genuine, that's what resonates."

"It's amazing so many people have tools where they can share something they're excited about - the details of their life, or their gadgets, cars or sports. Even though there are days I can get really sick of gadgets, it's great to share that passion and infect other people with it." Blogs are becoming an important way to discover opinions - for companies, as well as consumers. "Focus groups are a terrible way to find out what people want, but a blog, someone who is just sharing their personal views on something, not knowing if the company is listening or not is a very powerful thing... How do we make this more democratic? How can we do more with the tools? Instead of just text, it's audio and video. If you wanted to have a radio show, you had to get on a radio station - now you can record something, put it out on the internet, and people who are interested in it can find it."

"In my spare time - I started a new company! To me, what I'm doing dosen't feel like a job. It's hard, but it dosen't feel like a job. I feel lucky that I can share my enthusiasm and people listen - it's weird. 10 years ago I would have been a random dude at a party talking about stuff that noone cared about. There's not really a strict separation between my life and work. I think the most successful blogs are like that. That said, when I'm not blogging, I like to read, travel, go see movies, play videogames - I just got married, which is a miracle - she's also a blogger though, and she's busier than I am! I live in New York, so going out and walking around is the best thing ever."

His new company launched last Friday. "I think people will be into it - the one thing I learned is to keep it very focused and real. It may not appeal to a lot of people, but the people it does appeal to are going to love it. It's been a lot of fun and nice to apply a lot the stuff I learnt about what works online, from blogging, to music."

"I started Engadget because I wanted a site where I could read about gadgets, I started a record label because I want to say where I can go and get music from cool bands I'm really excited about"

You can visit RCRD LBL at www.rcrdlbl.com, and read Engadget at www.engadget.com. Peter's personal blog is at peter.roj.as