Laura MacDonald shows off her cake creations and shares her recipe for a quick & easy chocolate cake. 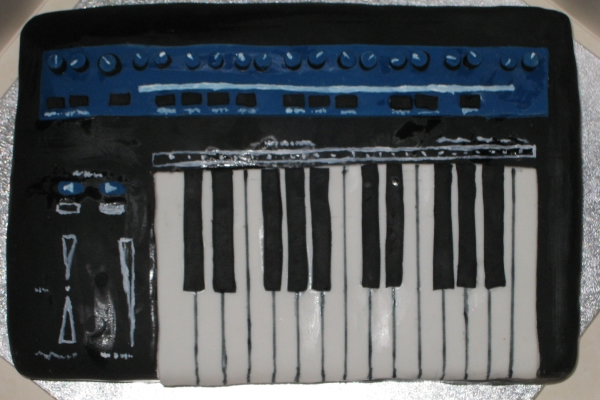 
I've been baking since I could reach the worktop in the kitchen and didn't think anything about it and certainly not as a career option. It was always something I just 'did'. One year I was out of work at the time of my eldest nephew's birthday so instead of buying him a present, I made him a kick ass Poke Mon cake! That started a trend and all my other nieces and nephews wanted their own personalised cakes. I realised it was something I could maybe make a living from when I made a Dragonball Z cake for my other nephew. He brought all his action figures through to the dining room and began playing with the cake; doing all the voices and making the other toys talk to it. He saw me watching him and gave me the biggest grin; I thought if I could make a kid that happy just by baking them a cake then I was onto a winner!

So in the past few years I've been building my portfolio up. I'm pretty much self-taught; I've not been to catering college or anything like that. The only classes I taken have been to learn how to make sugar flowers. I started them just over a year ago and it now means I can do big fancy wedding cakes. I've had a stall at the Miso Funky markets to broaden my customer base and I'm hoping in the next year to get a proper industrial oven so I can take on more work and bake full-time.

I do like a challenge. When a friend asked if I could make them a zombie cake, I thought, "Oh, that'll be easy". Then he showed the picture he wanted me to copy. It was from Lucio Fulci's film 'Zombie' and I thought it was going to be impossible. But I had so much fun making this, especially the flaky skin and yellow teeth. The sponge inside was bright red with thick red icing just to make it even gorier.

This was for a hen party; the bride to be ate nothing but junk food. I like that it's something you wouldn't automatically think of as making into a cake and like the Zombie it has the 'yuck' factor. I even put the noodles and miscellaneous peas and red bits inside.

I did this for a friend's wedding this summer. I was pretty nervous, as it was the first big cake I'd done with all the sugar flowers and I was convinced that the four tiers would collapse! I also made the marzipan bride and groom on top.

This particular cake for one of the Club Noir DJs but I started doing the tattoo cakes for my friend Lady Wurlitzer and her fabulous Fuzzy Felt Folk Parties at Nice n Sleazy's. Since then I've had requests for it with different messages in the scroll. I hand paint them all so no two are the same.

One of my more recent cakes. If someone gives me a photo to copy I try to replicate it as best as I can, so this cake has the same number of keys and buttons as the one in the picture I worked from. The recipient loved it so much he tried to play it.

Another one from this summer. I hadn't done a football logo before and was really pleased with how this one came out - especially as I'd never heard of the team!

Check out Laura's delicious recipe for a quick and easy chocolate cake.