A review of the most action packed festival of the summer. 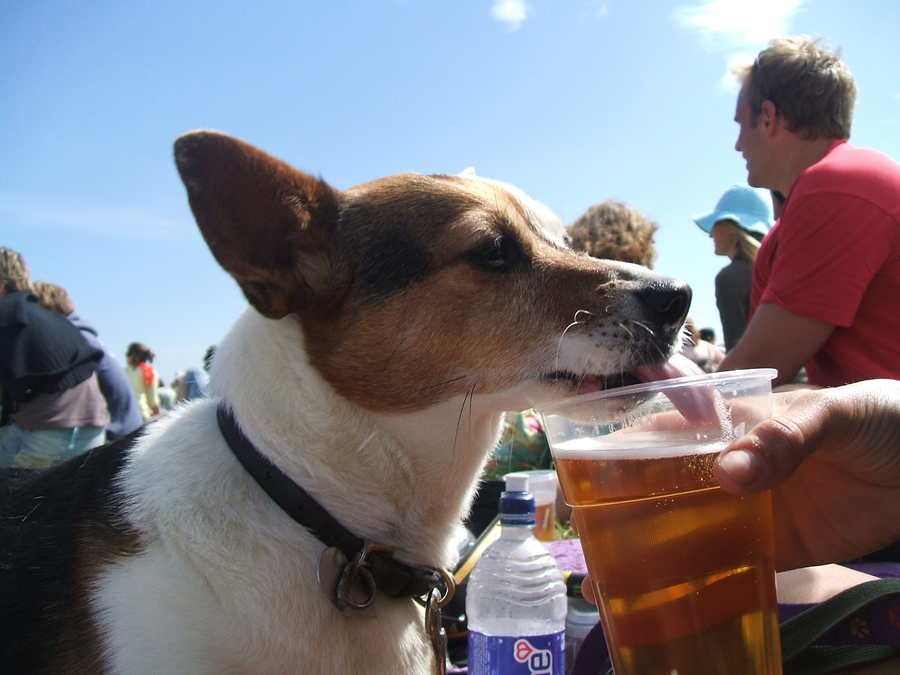 
Part of the Rip Curl Boardmasters surf festival, this year's Unleashed music festival was held overlooking Watergate Bay in Cornwall 10-11 August. Tickets were £49.50 for the weekend.

Things kicked off for me when Funeral For A Friend came on. They had a huge amount of energy and were clearly absolutely delighted to be standing on stage in the sunshine. The crowd reacted accordingly and they blasted out some huge tunes. The front-man got everyone to take part in a run-around-the-sound-tent mosh-pit alternative, which provided much amusement and showcased a great lack of co-ordination. Bystanders helpfully cooled them down with pints of water and warm lager.

Ash were headlining, and unfortunately everyone seemed disappointed by them. I saw them years ago at Reading and they were good there, but here they had little stage presence and not enough songs to be a headline act. A microphone problem halfway through their most popular song, Girl From Mars, meant no-one could hear them and when it was fixed they didn't start over (no time I guess).

Saturday saw a lot more people crowding into the huge field and a really exciting lineup. Kate Walsh was playing when I arrived and her voice is haunting and her tunes heartfelt. I'll be looking her up... though there were a few too many sad tunes for such a gorgeous day and up-for-it crowd.

Next up were Angus and Julia Stone - I've been waiting to see these guys and I was not disappointed! They were so, so good. Both of them are great to look at! And they have real stage presence. Julia danced as she played (trumpet, guitar, harmonica - plenty talented) and sang, and what a voice. Her brother seemed a little shyer, happy to sing, strum and smile. Their happiness was infectious and they did a great cover of Tubthumping as well as all their best tunes. It was very chilled-out stuff but not ultra-slow, there's still plenty to move your feet to.

As acts left the stage they migrated straight out into the Unleashed site, which was lovely to see. This festival is still small enough that the stars of the show can head out and mingle with their families and soak up the same atmosphere as everyone else. The crowd was a real mixture too - families, student types, surfers, oldies, emo kids, the lot!

I'd been anticipating local boy Raurri Joseph, who has just released his first album Tales of Grime and Grit. The title song is a belter, and a good crowd formed to stamp the grass. He started off with an apology for ever leaving Cornwall to find something 'better', waving a hand at the beauty surrounding the festival. He's made good, with a solid set of songs well appreciated by the crowd.

Newton Faulkner has amassed quite a following in Cornwall and his star is on the rise. His Teardrop cover is hauntingly beautiful. Dream Catch Me went down well and of course he had to play Sponge Bob Squarepants - his audience (and hecklers) will now accept nothing less. He didn't have time for much of the usual banter, but did introduce the crowd to the nuance of the '007 Chord' versus the 'Neighbours Chord of Tragedy'. Always out there, always engaging.

I saw Paolo Nutini at Glasto and thought he was lovely; here he was even better (I think he may have had a few less beers). His music is quite dreamy and laid-back for a headline act, but the way he mixes it up with covers really worked and he just lights up the stage. When he played the Jungle Book's I Wanna Be Like You, the previous acts all rushed on stage to join him with Newton Faulkner especially keen. New Shoes got everyone moving as did Jenny, and I loved These Streets as well.

There was also a second stage, the Relentless stage, but I have to admit that lounging on a blanket in the sun held more appeal than a dark tent. I am reliably informed that there were some excellent acts on, though.

The Swatch tour bus provided bubbles which wafted over the site all day. Their text-to-play games included a jumbo Twister-style mat... I like the concept of working for your freebies! As well as the Jagermeister overload of bandanas, leis and hats, the Vans guys were also giving out toys - beach balls mostly, which ended up being cushions or bouncing above the crowd.

The inevitable bungy ride was £20 each but still saw permanent queues and endless screaming. It was best done at sunset when it was all lit up; the views over the cliffs of Watergate Bay were amazing, if you could open your eyes that is...

I was especially intrigued by the oxygen stall, promising 10 minutes of breathy goodness (four flavours on each machine) for £5. The benefits are getting drunk faster(!), a general feeling of well-being, relief from general ills and a bit of a lift. I got a bit of a headrush and a lovely clean feeling; I think I smelt of lime and bergamot for the rest of the day. You look like a hospital patient but it's well worth it.

In the middle of the field was the Vans Wake Pool. Unfortunately they'd got the dimensions wrong (a Vans guy informed me) and it was too high for people to get a good view, but what you could see looked huge fun. Wakeboarders were winched from one end of the structure along a few ramps and hurled into the water. Some managed a trick or two and all threw a ton of spray. Build a viewing platform next time guys, and let us in on the action!

More spectacular was the bike show, a perennial favourite. I loooove bikes. I'll let the photos do the talking on this one!

This festival just goes from strength to strength and I can't wait to see what they do next year!

For more info on the festival see the official site at Rip Curl Board Masters.