We chat to minature artist Carrie M. Becker about her amazing creation 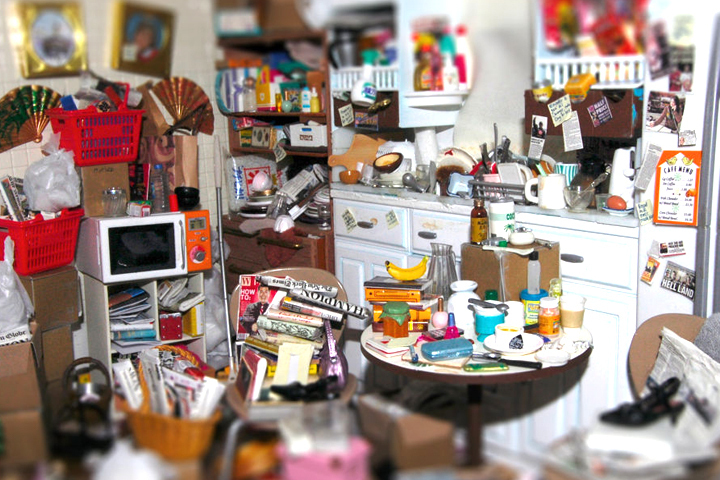 
Artists and hobbyists who work in miniature often focus on the charm of tiny objects, using the small scale to depict warm domestic scenes or teensy, perfect towns. “Barbie Trashes Her Dreamhouse,” a photo series by St. Louis, Missouri-based artist Carrie M. Becker, turns the idea of traditional miniatures on its ear by recreating the horror of a hoarder’s home, in all its junked-up glory. A photographer and sculptor by training, Becker has an incredible eye for detail. She’s packed poor Barbie’s rooms full of pretty things (chandeliers, curio cabinets, baskets of fruit) as well as trash; there are piles of plastic garbage bags, take-out coffee cups, unpacked cardboard boxes arranged on the floor with perverse neatness, even shopping bags from Chanel and Gucci with the stores’ tissue paper wrapping still inside. The resulting scenes are by turns funny, disturbing, and-- actually -- rather cute.

“Barbie Trashes Her Dreamhouse” has been shown in gallery spaces and online, most often as a photo series. Becker is now working to recreate the rooms in a turn-of-the-century dollhouse, which she hopes to use as an exhibition piece. Gallery owners, give this girl a call! 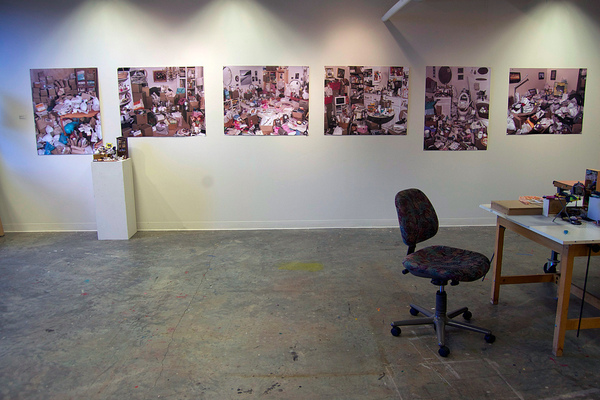 The exciting thing about really well-done miniatures like yours is that, up close and without a context, you can’t immediately tell if you’re looking at a “real” room or a dollhouse one. What draws you to miniatures as a medium?

Well, I did want there to be a point of confusion, that it might take a minute for what you are seeing to register, but as the series spread the title sort of preempted that from happening! I like the sense of the unreal, and tiny-as-cute has an undeniable appeal. 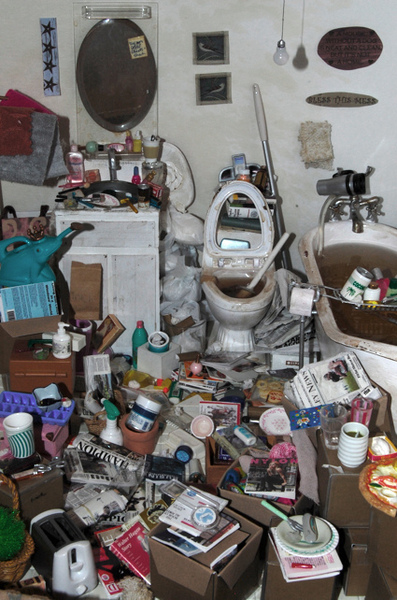 What inspired you to begin making these rooms? Do you remember the lightbulb moment?

I had a curio of Japanese-made miniature items called Re-Ment and a background in studio photography. I thought I could merge the two into realistic scenes. They started off sort of banal, but as I went along, I thought it was funny to see how much tiny clutter I could add. I then realized that I was drawing on similar imagery from popular TV shows, and soon realized that Barbie could be a hoarder too.

Studying the photos of your scenes I can find so many charming objects, like the magazines and decorative plates. Are they altered Dreamhouse / dollhouse things, or did you make some of them yourself?

Which scenes or objects did you find the most technically challenging to make?

“Working From Home” was the most tedious as it contains the most hand-made pieces. It’s kind of a drag to cut out individual newspaper pages then roll them up. One is okay.  Fifty is another thing entirely. Propping a scene can drive me bananas, especially toward the end where the tiniest of the tiny things has to be manuvered into place via tweezers. 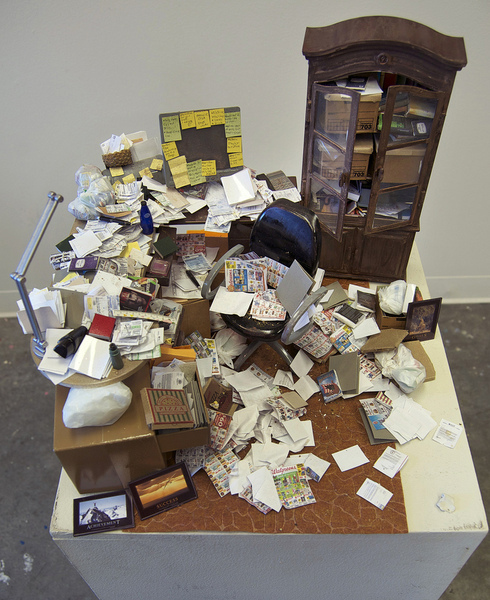 Your rooms are done in 1:6 scale. Is that the scale of Barbie’s house? Did you make your rooms in an actual Barbie Dreamhouse?

At first the Barbie house didn’t exist, per se. The original accessories that I was using were 1/6th scale, then the furniture had to be 1/6th scale, and so on. For the walls, I just glued scrapbook paper to cardboard to mimic a “real” house. Then when I was done, I folded everything up and put it in a banker’s box. Fortuitous luck nearly ran me over about three months ago when I found a handmade, turn-of-the century, 1/6th-scale dollhouse sitting on a thrift shop floor. I bought the thing for $75 and it is now slowly becoming the hoarder’s house from hell. She’s quite the beauty, about four feet tall, three feet across, and two feet deep. The bricks on the exterior were hand-carved and the mansard roof is made of real shingles while the fascia is trimmed in dentil molding.

Have you ever displayed the rooms in any way besides photographs?

I have. I did a show at The Crevice Gallery in Provincetown, MA. The gallery is literally a shoebox-sized inset in a wall of a larger gallery and I installed the “Working From Home” scene there. My next project is to get the wooden dollhouse seen! I don’t think anyone really knows this thing exists yet, so dear readers, if this is something that you would like to see in person, please keep on the lookout for exhibition opportunities and send them my way! 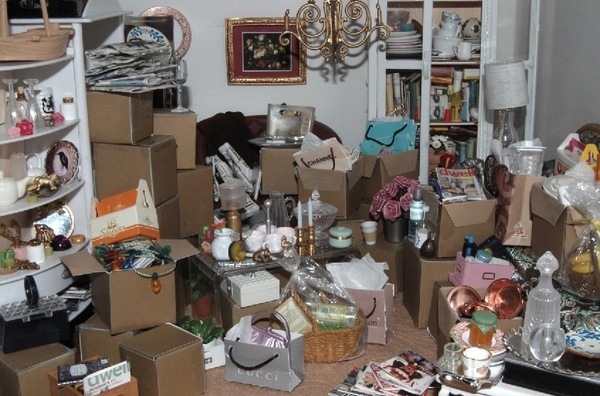 Your scenes have gotten a fair bit of attention, from Huffington Post to TIME magazine. Have you been surprised by the response?

It’s overwhelming! I only continued the series because of a wonderful friend’s advice. I had completed five images and thought I should stop because the hours spent cutting out tiny things was driving me insane. But printmaker Felicia Van Bork said to keep going, so one day I’m sitting at the table making dioramas, and the next the images are being written about in Italy and France! But I also have my secret weapon to thank for that. Barbie has quite the ubiquitous appeal.

Katie
“Thanks for your comment, jillbilly. I didn't know about the Thorne Rooms so I looked them up -- fabulous! I really have a thing for miniatures, anything that gives us another way to look at objects and material culture. Plus they're cute.

jillbilly
“This is freaking awesome - I think the curators at the Art Institute of Chicago could be convinced to mount an exhibition as counterpoint to its traditional Thorne Rooms.” 13th January 2013