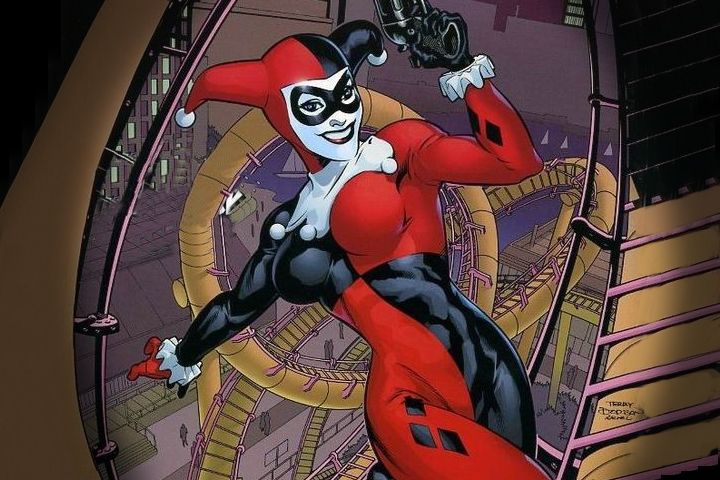 
Harley Quinn, formerly Dr. Harleen Quinzel is a supervillan from Gotham City. Best friend to Poison Ivy and on/off girlfriend to the Joker, Harley sure gives Batman a run for his money. We caught up with the comic book star and her pet hyenas to find out how she getting on with her life of crime in the big city!

Hey Harley, how's it hanging?
By the neck until dead. Hah! Little jailhouse humor for ya there. That gag always gets screams around the Arkham rec room.

Those are some pretty snazzy threads you're wearing, did you make them yourself?
The first Harley suit I threw together out of some odds and ends I stole from a costume shop. After messing around with a thread and needle, I got so that I could stitch together duplicate suits myself. All it takes is spandex and patience.

What other super-vilaness accessories have you crafted for yourself?
Anything can be an accessory as long as you cover it with red and black diamonds. The only real hassles involving my outfit are the black and red pixie shoes and gloves. Because they are different colors, I always have to make more than I need, and by "make," I mean steal.

How would you describe your style?
I'd say my current style is a post-modern take on the gun moll chic of the 60's BATMAN series, with classic pin-up artist overtones, Elvgrin, Petty, Timm, y'know, those guys.

Can you describe a typical day in the life of Harley?
In many ways, I'm just like everyone else - wake up, feed the hyenas, an hour of cardio (gotta keep in Bat-blasting shape, of course) followed by some hang time with my BFFs, Selina and Pammie. It's never long until something interesting happens, an attack from a one-time ally, a run-in with the Bat-crew, or someone driving a SWAT van through my front door. Goofy stuff like that seems to happen to me at least once a month. I just try to roll with it.

Where are your favourite Gotham hangouts?
Bank vaults, jewelry stores, the gold exchange, any place a girl's imagination can wander.

After a hard night's work, what's your favorite snack and can you share the secret recipe?
I keep it simple, Oreos and Mountain Dew. That's good for those 24 hour and longer hero fighting sessions when you need a fast energy fix. Of course the crash is kinda nasty...

Any tips for keeping a catsuit perfect figure?
Being faster than most Gotham cops helps -- a lot.

Is the way to Mistah J's heart through his stomach? What do you cook for him?
With our hectic lifestyles, we don't have much time to cook. We usually get take-out from different restaurants - whatever looks good on the menu, whatever looks good in the cash register.

Speaking of your Puddin', how is he and how's the love life?
He's good, but we're taking a break right now. He said he needed some room and I agreed. Especially as the "room" in question was the six inches between his fingers and my throat. It never helps a relationship for one of the people involved to be too "clutchy."

What is it about him that makes you love him so much?
He makes me laugh. True, it's usually at someone else's misery, but I take my jollies where I can get them.

" When your best gal pal can feed you to a giant Venus flytrap, you wanna stay on her good side."

Do you think you two may ever settle down and raise some baby super vilans?
Sure, as long as I can hire a nanny. Hmm, knowing any kid we'd have, we'd better make that nannies. A whole lot of nannies.

What would a perfect date be for you two?
A quiet table for two, someplace out of the way, preferably on Batman's corpse.

Do you have any romance tips for our readers?
A good sense of humor is a must. Also, learn how to duck. That can be a real lifesaver.

How's Ivy doing and what makes you two such BFFs?
There's a lot of give and take in our friendship. She gives me a lot of attitude and I usually take it. When your best gal pal can feed you to a giant Venus flytrap, you wanna stay on her good side.

What do you think about Crafterella? Room for one more in the Quintets? *nudge nudge*
Always room for another ally, especially if they are good at costume repair. I go through three of these clown suits a week!

How are Bud and Lou and what makes hyenas such great pets?
My babies are great, thanks. What most people don't know about hyenas is they always respond to the loudest female in the pack. Seeing as that's always me, they always come a' running when I yell.

Do you think Batman will ever get his comeuppance?
The big dope's luck has to run out sometime!

If you had three wishes, what would they be?
Two of then would involve Batman kicking the bucket in particularly humiliating ways. My third wish would be for a thousand new wishes, and I'd start killing off Batsy all over again!

Any last words for the readers?
See ya, suckers!

You can find out more about Harley Quinn in her comic book series or watch episodes of the Gotham Girls. Also, check our her creator, Paul Dini's website to find out about Jingle Belle!.

Monique D.
“We need more Quinn spread to where they would finally put her into a Batman movie! Anyone else agree?” 1st August 2012

Redpandas Milkshake
“God she's adorable, I kinda creeped out by clowns but mister J and harley are just too cute!” 10th June 2011

Eric S.
“This is super-duper! I do a weekly Harley Quinn feature on my blog called Harley Qwednesday (naturally) at http://toyriffic.blogspot.com/search/label/Harley%20Qwednesday and this interview is just peachy perfect! Thanks to all involved!” 16th March 2011

Cyanide Sweetheart
“Paul Dini is my favorite Batman writer! Loved this! (And his honey, Harley, too!)” 14th March 2011

Harley Quinn
“This is adorable! I was so surprised to see her featured because she isn't exactly a main villain (even though *I* think she is, hahaha). This was an adorable article, very well done! ” 14th March 2011

Angie Go BOOM
“So cute. She was my favorite villain from the Batman cartoon that was on in the '90s.” 10th March 2011