Then and now interview with Adrienne "Alice" King. 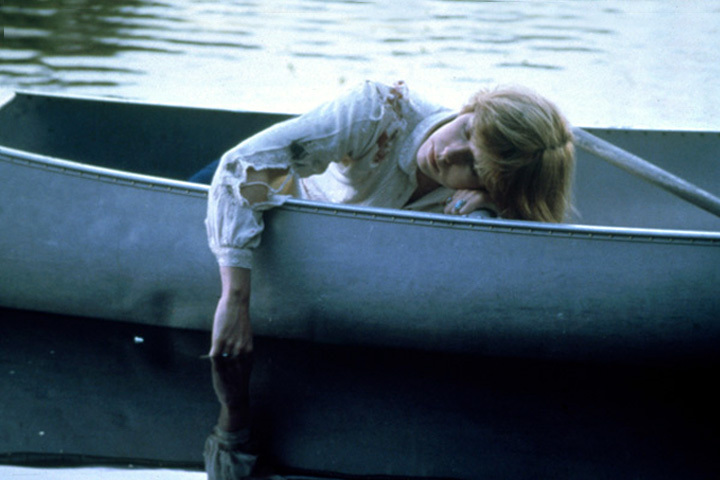 
It was the summer of 1979 when Adrienne King heard about a small independent horror film called Friday the 13th, and then was cast in the iconic role of Alice Hardy, the lone survivor of the Camp Crystal Lake Massacre. Adrienne said that when she arrived at the camp and saw the crew setting up she knew from that moment on that this was going to be the adventure of a lifetime. She also said that despite long hours, grueling night shoots, and cold temperatures everyone really pulled together to get through it. Adrienne also recalls that there were never any egos or attitudes on the set either and that it was in some ways like being at a real summer camp. Adrienne reflects fondly on that time and says one thing that will always stay with her about the experience is getting to work opposite veteran Betsy Palmer who was cast in the sinister role of Jason's mother Mrs. Pamela Voorhees. Adrienne said that working with Betsy caused her to really step up her game, especially during the fight scenes. They both wanted the scenes to be as real as possible so they never used any stunt doubles during their scenes together. One scene in particular that Adrienne says was quite hard was when Betsy was on top of her back, grabbing her by the hair and smashing her face into the ground. Adrienne assures anyone that this scene was "real" and they both walked off the set after battered and bruised.

Friday the 13th ended up being one of the biggest blockbusters that Paramount released in the summer of 1980, which turned out to be a big surprise to everyone involved in the making of the movie. It was such a small production that they almost didn't finish making it due to lack of money. After finishing Friday the 13th, then onto the filming of Part II, Adrienne was dealing with having a stalker, this went on for almost a year. Adrienne has said that around the time of the early '80's stalking was not considered a crime and as such was not taken seriously by the authorities. Aside from being mentally shaken during that time Adrienne also said that filming the second Friday movie was not as an enjoyable experience as the first due to many factors. In the second movie she actually wasn't called to film her parts until the very last day of shooting, she wasn't given a script and there was also no wardrobe fitting done for her. One of the worst parts though was the fact that they hadn't checked the props beforehand and she ended up getting really hurt during the shooting of her scene. A year after her ordeal Adrienne was accepted to study at the Royal Academy of Dramatic Arts in London, and put that nightmare behind her.

She returned to the US in 1984, and started working in voice-over work. She eventually became a successful ADR looper, which is where one "re-voices" characters or adds additional dialogue or sounds to a specific scene or scenes in films and television." she explains. She has done work on such movies as What's Eating Gilbert Grape, Man Without A Face, Jerry Maguire, and Titanic to name a few. After enjoying many years in the looping field Adrienne did finally get back into acting and it only took her 26 years to do it. Adrienne will make her comeback to the horror movie genre in the Mel House movie "Walking Distance" set to be released in 2009. Adrienne plays the role of Louise Strack a part that she says was originally written for a man. Adrienne says that she was a little scared to accept the role at first due to her having been out of the acting scene for so long. She says that she is so glad she did accept it and also says that her experience filming the movie was definitely a "great" one and that she has the acting bug again. She was also recently approached to take part in the documentary His Name Was Jason: 30 Years of Friday the 13th. When asked what she thinks about coming up on the 30 year mark of this iconic film and what is it about this film that has such an impact with people even today. Adrienne says that she can't really believe it and the one thing she hear from fans of the movie time and time again is they love it because of how "real" it seems. There is doubting the cult following of the franchise and Adrienne says she is flattered and loves it all so much. It becomes a family experience when you have 3 generations of fans coming to the conventions and they have all the memorabilia, and sometimes are even sporting an "Alice" tattoo.

These days when she's not doing the convention circuit or reading scripts for potential roles Adrienne is immersing herself in her art as a painter. Being an artist has been something that not a lot of people know about her and she credits her painting with allowing her to get rid of her personal demons throughout the years. If you ever have the chance to see Adrienne at a horror movie convention then you would have most likely seen some of her art as well as she does bring some with her and has had requests from some of the convention heads to do so. One of her most recognizable pieces is her as "Alice" in the closing shot of the first Friday movie where she is on the lake in the canoe. Adrienne is currently looking to have a gallery showing of some of her darker art sometime in 2009.

To read more about Adrienne or to purchase some of her artwork check out her website.