Toni Carr, aka Joan Of Dark discusses her loves of roller derby and knitting. 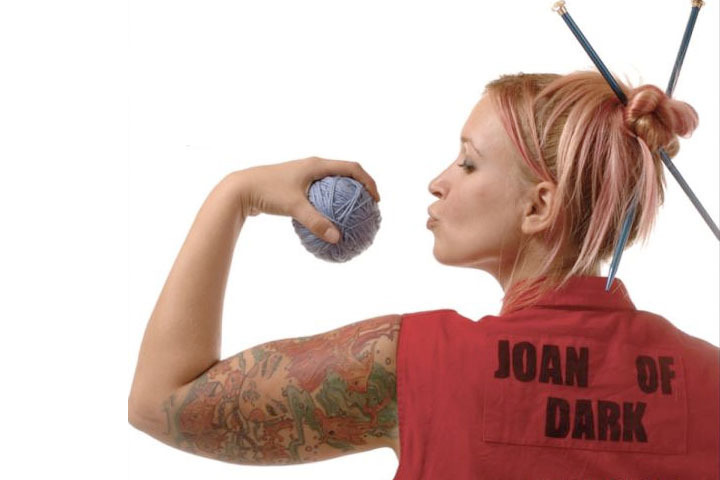 
When did you first discover roller derby - were you a fan in the 70's or was it a recent discovery? br> It was a pretty recent discovery. My friends Sweet C and Strawberry Jam were going on and on one day about how much fun it looked, and how bummed they were that there wasn't a league in Indy. I started googling the sport that evening to see what they were talking about.

Why did you take it up? br> Once Strawberry Jam decided to take matters into her own hands, by starting a Naptown Roller Girls myspace page, I knew I had to sign up. I immediately went with my friends to the roller rinks during open skates and started tooling around in some crappy rentals.

How long did it take you to learn? br> We practiced as a league for about a year. First in the parking lot of a church, and eventually in an actual skating rink. I still feel like I'm "learning" how to play derby. While on the surface, it looks as simple as "skate fast, turn left, knock down the girl next to you" there is actually a surprising amount of strategy involved in each game. You practice, learn, and evolve - not only as an individual, but as a team.

"Knitting is WAY easier to learn than roller derby!"

How did you come up with your skating name, Joan Of Dark? br> It took me forever to come up with a name! Originally I wanted to be Rainbow Fright, but there was already a skater named Rainbow Fight, so I had to pick a different name. It felt like all the good ones were taken! Luckily, one of our announcers, Brownie Her0, shot off a list to me. Joan of Dark just seemed to fit me, way better than any other name I had thought up!

Any skater trying to think up a name needs to not get discouraged! It can get frustrating when the first 20 amazing names you come up with belong to another girl, but you will find the right name eventually. I'd also recommend getting something with an easy nickname. You want something that your fellow skaters can easily call out on the track.

"I know that in 20 years, I'm still going to be feeling my derby injuries!"

Do you get use to all the bumps and bruises? br> I know that in 20 years, I'm still going to be feeling my derby injuries! I suffered an AC separation in my shoulder, (with a teeny, tiny fracture) and I spent a good portion of last season suffering with a bad knee (I imagine I'll spend a good part of this season suffering as well). Other girls on the team have had broken tailbones, shoulders, ankles, back problems... the list could go on and on.

Injury can't be something that you're afraid of. Skate with confidence, and work out a LOT. I was told that if my shoulder hadn't been so muscular, it would have been badly broken. The more in shape you are, the less likely you are to be hurt. That's not to say that you won't be however. Not only is a derby girl skating fast, she's also getting body checked by up to five other girls (if you count the jammer) at a time. Injuries are a given.

How does roller derby today compare to the sport of the 70's?
Roller derby today is much more authentic. The majority of leagues don't showboat, or participate in the staged fighting that 70's roller derby consisted of. WFTDA teams, and those playing by WFTDA rules are determined to bring legitimacy to the sport. So while the 70's teams had the "bad guys" and the "good guys", wrestling matches, races, and chair throwing, that is not going to be the case with today's sport.

Why do you think it's mostly women involved in the sport today? br> I think boys have so many OTHER sports they can play, whereas girls choices are limited. Boys can play pro football, baseball, hockey, etc, and will play to sold out crowds. Whereas the girls versions of those sports will, quite unfairly, in many cases draw a much smaller crowd. With roller derby, it seems that the exact opposite is true. Not only do we girls get to play a full contact sport, without the rules being modified for girl play vs. boy play, the girl version of the sport is usually more popular with the fans. I think the female fans are empowered watching, especially since we've grown up being told, "girls don't play football, girls don't roughhouse". The male fans originally come for the novelty of girls playing a contact sport, but they keep coming once they get blown away by the awesome game play. I've heard many a male fan confess to originally becoming interested to see "chicks fight in short skirts" and end up forgetting that they were looking at short skirts and hot women, and instead focusing on the actual sport, and how cool it is to watch!

"Girls today like to put their own mark on their uniforms, and get to keep their sense of style"

Does the punk rock look and derby go hand-in-hand? br> The girls that re-birthed the sport this time around are the punk rock, do-it-yourself type of girls. The girls that have the creativity to make really cool clothing for themselves and have a crazy sense of style tend to be the girls that are starting up leagues. The teams you used to see tooling around in lycra tended to be owned by a non-skater behind the scenes that told them what to wear, what to say, etc. Girls today like to put their own mark on their uniforms, and get to keep their sense of style. Though, at least one skater in the 70's still broke the mold - Ann Cavello had every color in the rainbow in her hair and tattoos. She definitely pushed the boundaries in the early derby days. Lots of girls now tend to look up to her attitude and style.

Do you have any advice for someone wanting to take up roller derby ? br> Don't be afraid. Understand that you will bruise, then you will heal. You will fall down, and get back up again. Then you will fall again. And again. And hopefully the next time you fall, you'll take another girl with you.

Why did you decide to combine your two passions of roller derby and knitting? br> It came pretty naturally. I'm a roller girl, and I knit. Some of the other girls on my team knit or crocheted, and the ones that didn't wanted to learn! After meeting other leagues during our first season, I discovered that a lot of roller girls knit, sew, or crochet. It's also a good way to relax in the hours before a bout. We'll tend to have a lot of down time, so I'll pop on headphones and work on a sock or hat while waiting for the bout.

"Hopefully the next time you fall, you'll take another girl with you."

Any favorite items to knit? br> I can never pick a favorite! I'll get stuck on hats for a while, and whip up about 10 jammer beanies when I decide to move on to fingerless gloves, or purses, or toys. I go on knitting binges! I love skating with my legwarmers. They're so comfy and nice when freezing my butt off in our big warehouse practice space! During the summer I found myself toting my skate bag, On The Move, everywhere. It was perfect for holding all my crap when I was skating outside.

Why do you think these two hobbies work so well together? br> Knitting doesn't need to be a solitary event, and derby is such a social outlet for a lot of girls. Plus, it's a common bonding ground, a way to get to know your skaters off the track. It's hard to get annoyed with a gal for elbowing you when she finally helped you master that bitchy kitchener stitch the week before!

Pic of my team and Vickie Howell in my coffee shop, when we filmed an episode of Knitty Gritty. (Photo by Dan Carr.)

Tell us about your Stitch N Bitch? br> I'd say roughly half of us knit or are learning to knit. We plan on holding down the rest of them and forcing them to learn any day now. The Stitch and Bitch nights are random. Informal ones spring up when I'm working at my coffee shop and girls pop by. I host a lot at my house, since I apparently have the best liquor cabinet in the league. We just held one a couple months ago for our fresh meat skaters. It's a good way to hang out with your new derby girls in a relaxed setting. We tend to pop a movie in, drink some mixed drinks, and knit or do other crafts.

Now that they are both back in fashion, are they here to stay? br> Oh totally. Both roller derby, and knitting, give me such a sense of control. I want a hat, I will make the hat myself. I want to be a badass, I will strap on a pair of skates and be a badass. Women today are really feeling this sense of empowerment. The "I can do that" attitude.

Do you do/play any other crafts or sports? br> I ride horses, and I will argue with anyone who dares that it is a sport! I crochet, and needle felt, but I can not sew for the life of me. I like portable crafts, since I'm always on the go, and sewing has just never meshed with my lifestyle the way fiber arts have.

How was writing the book? br> Writing the book was very hectic. My editor kept telling me, "it's harder than you think it will be" and she was completely right! It involved a lot of late nights and early mornings, lots of stress, and lots of coffee. I'm horribly unorganized most times. I have alarms on my phone reminding me about practice, projects due, scheduling, bill paying... the thing is constantly going off on my desk. I think the only way I can do everything that I do is through sleep deprivation and deluding myself into thinking that there are 26 hours in a day!

What's next for you? br> I'm entering into my third season with the Naptown Roller Girls and our team, the Tornado Sirens. This year we've added a JV league, the Warning Belles. I'm really looking forward to getting to know these girls, and taking our teams as far as we can in the derby community. I'm hoping to meet more derby crafters, and perhaps, if Knockdown Knits does well, start another book that will include derby girls from all over, and the crafts that they do for the sport. I'm also getting ready to put some stuff up for sale on etsy, with my fellow roller girl Sweet C, Sweet C's sister Ali, and one of our stats girls, Missy Link. It's called Aggressively Awesome Stitches... Made by Aggressively Awesome Bitches. We're doing a craft fair and some other events as well.

Find out more about Joan Of Dark, or pick up a copy of her book from her website. (Photography by Tom Klubbens)

Christina Q.
“Thanks for this from another crafty derby girl!” 10th December 2008