Micha Mae experiments with the Andean traditional Day of the Dead bread. 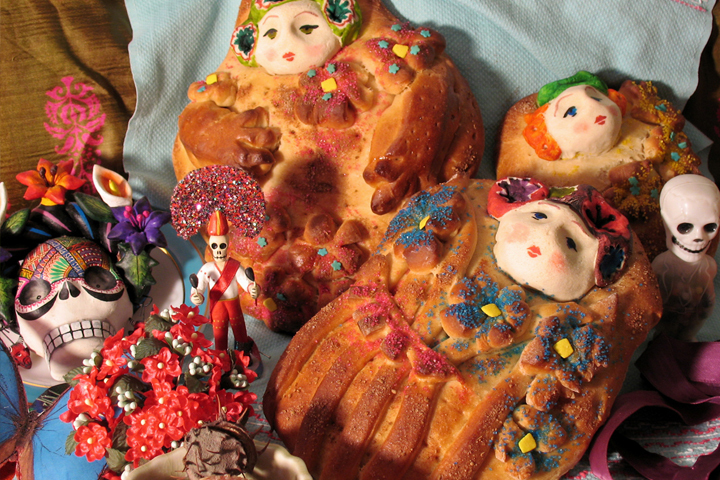 
T'anta Wawas are an Andean traditional Day of the Dead bread. They are left as offerings to the dead in cemeteries and enjoyed by living participants during the Dia de los Muertos celebrations. T'anta Wawas are special breads baked into the shapes of children or pets. They are similar to the Pan de Muerto traditions of Mexico. The bread is often baked with plaster face masks, very similar to babydoll faces. I was very interested in trying to make my own T'anta Wawas. I mean how could I resist, it's craft and baking all rolled up into one delicious project.

I made my own face masks from a flour based clay days before starting the bread portion of this project. My tutorial is below. Now, this was my first try at yeast bread baking and to my surprise it was quite simple. I've always avoided recipes that called for yeast, fear of the unknown I suppose. I basically followed this recipe for Pan de Muerto, but doubled the portions. I also added one tablespoon of vanilla to the milk mixture and a generous amount of cinnamon to the flour mixture. Instead of forming the dough into traditional cross-bone loaves, I made simplistic baby forms. Here are a few sketches I made from traditional examples that I found online.

Since this was my first attempt at yeast bread baking, I found a few helpful tips online as well. This tutorial from Chanit in Israel was a big help -it's not for Tanta Wawas, but it gives good visual examples of creative bread shaping. This post on "the fundamentals of making yeast bread" was also a huge help.

I should have taken photos of my bread baby making endeavors but I just got too involved. Basically, I just made it up as I went along. One helpful tip I found was, to divide your dough with a sharp knife or dough cutter, instead of trying to pull it apart. Also, be sure to prick the dough with a fork in thick areas.

I brushed an egg wash on the finished bread babies and sprinkled them with a cinnamon/sugar mixture as well as colored sugar crystals. I'm really pleased with the results, they taste pretty good too. I will definitely be making more of these in the future.

Make sure to check out our interview with Micha, Baking With Medusa.

Rachel M.
“How wonderful, they turned out beautifully.” 29th October 2008