Raid your garbage and turn your old milk jugs in to a recycled skeleton. 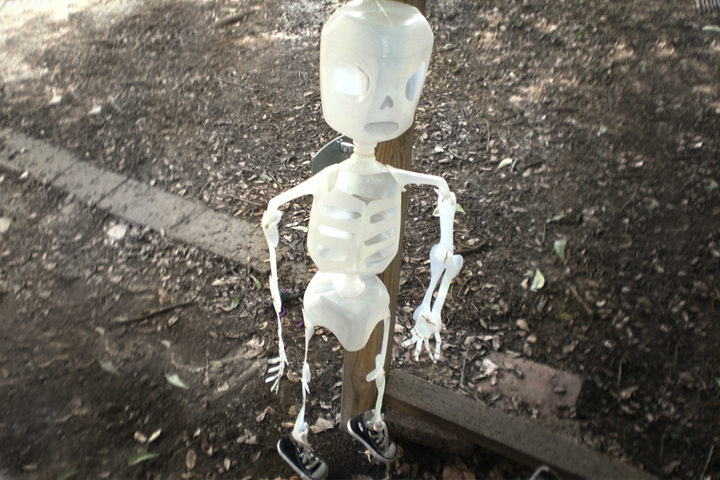 
My boys, newly three year-old twins have been fascinated with skulls for months now. I've been racking my brain to come up with a kid-friendly (something that they won't get hurt on and that will be hard for them to destroy) cheap, (preferably using on-hand and/or recycled materials) and fairly quick and easy to make.

They are still too young to actually execute many crafts on their own aside from painting and drawing so it has to be something that isn't horribly annoying or boring for me to assemble.

I started thinking about recycling and recyclables when it hit me- a skeleton made with milk jugs! I ran it past the boys to see what kind of reaction it would elicit and they were excited. All day they chased me around saying 'skulls? Milk jugs?'

It was fun to walk around our neighborhood trying to guess which streets would have the most 'blues' (the blue bins issued to us by the city) and even more fun to try and guess which ones would be milk-drinkers.

I felt a little zip of voyeuristic delight peering into each bin. It was a little odd digging through my neighbors "garbage." I was afraid of being spotted and questioned but no one batted an eye at the mom pushing a gigantic double stroller digging through their recycling bins.

One woman did see me and came over to chat. She wasn't annoyed or afraid at all, merely curious. When I told her what we were doing she said: "What a great Mommy you have!" Wow... so kids are all you need to dig around people's homes without arousing suspicion!

By the end I had it down to a science: hippies? Probably have a soy, rice or almond milk container in their bin. Older folks? Most likely a milk jug. Hippies that seem to travel a lot in their van? Score!! Three water jugs.

I had forgotten that water also comes in gallon jugs and was happy and relieved to find several of those. I hadn't made anything like this before and wasn't sure how many jugs I would need. It was great to think that I wouldn't have to spend an hour bent over my sink rinsing out sour-smelling milk bottles.

I ended up finding many more than I actually needed and went home happily to rinse out my bottles.

I soaked them all briefly in hot, soapy water in order to remove the labels easily.

I came to a water jug that I recognized as being in the bin of the traveling hippie's house. I removed the cap and caught a strong whiff of something familiar: beer? Patchouli? No, pee!!! Aggghhh! That one went straight back into my own blue bin.

After all the jugs got naked (labels removed) and had a bath, the fun of creating a child-sized skeleton began!

Make sure to check out Jen's interview with the Crafty Chica.

jess smiley
“I love it! Methinks it's an alien skeleton. Wonder where his skin got off to...” 21st October 2008