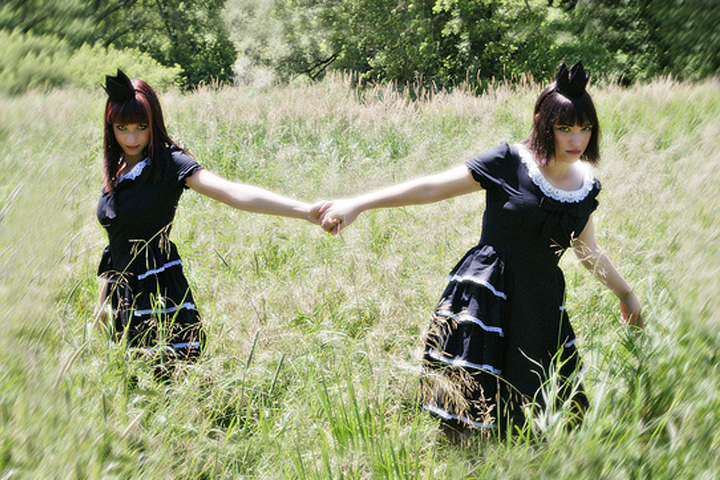 Getting to know a bit about this amazingly talented three sister design team and their up and coming design house.

At what age did you all decide that you wanted to be fashion designers?
We've always been creative and thought pretty much as one. Like those clouds of dust and hands and heads in cartoons when two characters are fighting, that's somewhat how we work, but it is mostly as we are all three trying to get to the same place, but by different routes. Alice takes the shortest route possible and in a few words can sum up what's taken us an hour to figure out. I would take a bicycle and would have to stop in some field and open a picnic basket (which I cleverly packed the night before filled with vegan picnic delights and iced jasmine tea) and sketch for a while. Elizabeth would arrive by dirigible and say very little save, hmm, well, I guess, if you want to... [I'm not that bad - Elizabeth] and then make one final change that suddenly transforms everything in to something very magical. We've always been working on things, projects together. Each summer we put on a play for our parents and their friends, we've been doing that since we were little. Gothic & Lolita fashion is the first thing that we all like equally - save The Cure and strawberries.

What is the story behind the inception of your line?
Elizabeth heard about Gothic & Lolita when she was in fashion school. Her friends with Asian backgrounds started bringing in Gothic & Lolita Bibles and she said, "what is that?!". Here, a million miles away, were people dressing exactly how we wished we dressed. It was so liberating. Our father pulled down all these old 80s and 90s Goth magazines and showed us how similar it was to sub-cultures back then like the Blitz kids and the early Goths. This however was much more elegant (sorry father) and better made. We started buying the bibles and our parents gave us a subscription to Kera, and seeing Fruits, well, we were hooked. We always used to get when are you going to grow up and live in the real world. Finding Gothic & Lolita made us realize we already were in the real world, everyone else was just jealous. So that said, with Elizabeth a now graduated and unemployed fashion student and myself, a now graduated and unemployed art student and Alice, a now graduated and underemployed English major it was natural for us to form a company and a website and make a go of it.

Why the name?
We wanted to be a house, like the House of Chanel or Worth. The old couture houses that had crazy over the top quality and style. We want to reach a point where people know the name and know that whatever we produced would be infused with whimsy, quality, and magical spells. We want everything we do to be elegant and transforming. We chose Pomegranates as Elizabeth loves pomegranates. They are also so evocative and pregnant with symbolism. Sort of a company that the Pre-Raphaelites would feel comfortable in. Also it was hard to spell.

Where do you draw inspiration from?
We draw our inspiration from so many things; it's very hard to pinpoint a ground zero. From what we read - we read everything we can get our hands on, from newspapers, to novels, to cereal boxes - and what we see. Movies influence us way more than we'd like to admit. Fruity vampire films, Asian cinema, you name it. We're all addicted to Fashion TV and Style.com podcasts in a serious way. A large part of our inspiration though comes from our need to make the world, or as much of it as we can, more alluring and beautiful and mysterious. We are forever switching off lights so rooms are not fully lit, and leaving notes in books for others to find. Mr. Flowers said once that if you believe it and say it enough everyone will believe you and it will suddenly be true. We are making our own reality, why not; we are vegans, pacifists, magicians. Why not? We are so fortunate to be allowed to create like this, and our growing fan base seems to want to travel with us. It's wonderful.

Do you think it is essential that designers have a muse?
Oh yes, absolutely. We actually design with a few people in mind. Our dream is to make dresses for one or two people we know who have serious body issues. We keep them in mind when we're drawing and sketching and throwing ideas about. Also there are a few people who we don't know personally, but who embody the whole idea of what we do. We also make clothes for ourselves.

Do you all collectively help in the entire designing process, or do you each have designated jobs?
We all play our part in the process. Elizabeth is the designer but she is terrible at drawing out her ideas so she usually describes them to me and then I put them on paper. Alice comes in at the end, she is our edge, she grounds us a lot. And then there's Mr. Flowers, our parents' oldest friend and our business manager. I like to say that we're a square piece of paper ripped in to four and then thrown in to the air. If you trace around the shape the fallen paper creates, that is our world. Although it started with four equal squares - and believe me, we are just geeky shut-ins (plus Mr. Flowers) - it becomes a beautiful and complicated design. Or we like to think so. We are so new and just starting out, we are learning. We especially like to collaborate with the people buying the dresses. We are making an Alice in Wonderland dress for a really cool girl in Mexico. She wanted it totally traditional, but let us 'lolita-ize' it a little. We've ended up making two dresses, one the Alice blue and one black with grey. It's still in production; I cannot wait to see how it turns out. We like to do commissions and one offs. We can make our existing dresses to any size.

What is it like working together being that you all are sisters?
We can be really mean to each other, sometimes completely unprovoked, but we also forget almost as easily. We are really close, scarily so, and seem to naturally wander up to our attic studio each night as if it's the most natural place for us to be. None of us have 'significant others' at the moment and I pity anyone who wants to join.

Any sibling rivalry?
Since we all do different things we find that we compliment each other. Our parents too are so good at, well, generally ignoring us equally, so it's a very egalitarian state, like Barcelona. Use 3 words to describe your line. Elegance, romance, deathliness.

What type of a girl wears THOP?
We want girls to wear our stuff and feel alive. To step out on their way to school, or work or a club and feel that they have huge secrets and inner truths to share that will change the world. That wonderful, well rested, clean hair, new clothes, full of coffee and listening to the best music in the world feeling. Girls that aren't afraid to be different, full of whimsy and magic. Girls that inspire.

What do you do when you're not designing clothes?
Alice has a job in a bookstore, but at night she is working on a novel. I am illustrating a book and trying to start a small press and Elizabeth does a lot of animal rights volunteer work. Mostly though we love to hide out in our house and make food and watch movies and read. This house is so magical and full of secret feeling rooms. Our parents have a knack for finding totally beat up but just right couches and chairs and the house is full of them. Books, couches, cats, hedgehogs, stuffed animals, and a hissing cockroach given to us by a magician who was retiring.

For more information about THOP please visit their MySpace or their website. (Photography by Jowita Bydlowska).