Diandra caught up with Step and Xan from Canadian band, Trike. 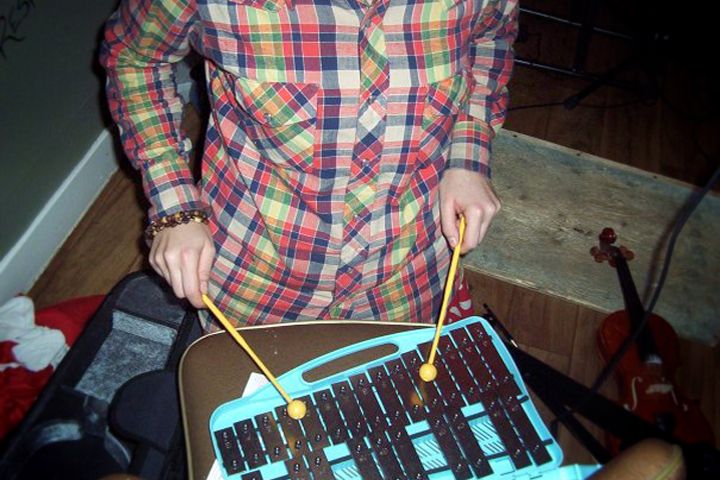 
If you close your eyes and make a mental list of where you're at you may notice that you're a little sticky with sweat, that your calves and ankles are sore from dancing, and that the sound coming out of the loudspeaker is reminiscent of the Talking Heads, The Cure, and The Magnetic Fields. When you open your eyes you realize that this tall, hairy man is wearing a sparkly purple vest, his hands permanently attached to the keyboard (unless he is mid-disco move); and his cohort is dancing a jig on a piece of Linoleum. In short, Trike rocked Prince George.

Joined together by trans-Canadian forces, Trike is arguably one of the hardest working bands in the indie-business. Xania (Montreal) and Stephen (Vancouver) treat their electro/synth-pop project and a full time gig; and they're unabashedly DIY. While busking one day Trike was discovered by the world of rock radio and asked to perform on the Gong Show, a contest with a $20,000 prize; and they won! I had the opportunity to sit down with Trike in a wonderfully smelling pizza shop for about 20 minutes and these are some snippets of our conversation.

Step: Yeah, it just gave us a lot of freedom. Freedom rocks!
Xan: I felt myself walking with more confidence (laughs), I was like, "I'm not broke!"

So, this is your full time job then?

Xan: Yeah
Step: But it's been our full time job for three months before this happened even, because we were busking.

What's the future of Trike?

Xan: We're touring Europe in April
Step: We want to teach the world to dance the Trikey, I think it's really important.

Where are you going in Europe?

I've been listening to your CD this morning and it sounds really 80s. I hear the Cure and Pulp, and speaking of Electro pop, do you think that Trike is breaking into that 80s reconnaissance?

Step: The 80s reconnaissance... but electroclash kind of came and went, right...?

Do you think so?

Step: Well, Ladytron - their sound completely morphed and changed... Adult was considered electroclash. You don't really hear a lot of bands right now doing the 80s thing.
Xan: I think it's coming back

Is it just maybe in general that you don't hear it? I mean, I'm really into electroclash and electropop so I hear it all the time, like YACHT and the Blow... so there's kind of this movement, like Last Gang Records, that is electro poppy.

Step: We should be sending our stuff out to these record labels (laughs)
Xan: I kind of like being independent
Step: Yeah (waxing and waning)

I think when you sign with an independent label it's not the same as signing with a "label". You're kind of independent from the "label" system.

Step: Exactly. But in terms of the 80s sound, I'm an 80s kid so it's a huge influence. And I've always loved 80s music, like all the bands you mentioned and the Smiths, Depeche Mode, New Order, Joy Division, and I mean even like late 70s punk, like the Sex Pistols and stuff which is all pretty catchy stuff, the buzzcocks, but that new wavey sound... and the Cars, huge huge huge bigtime. So, I mean, I guess it's in the sound. But I don't know that we're trying to create that sound or if it's just what's pleasing to the ear

Like it's just the music you want to make instead of trying to fit into that type of culture?

Step: Yeah, we're not trying to emulate a particular sound, and just using a synthesizer with those beats that are from a certain point of time.

I find in Canada that Canada is obsessed with Novelty music.

You notice that? CFOX has all those "radar sucks" songs for example where they take classic rock songs and turn them into novelty songs by changing the lyrics..or the Arrogant Worms or Moxy Fruvous for example, and there's this history of novelty bands in Canada and I was curious if maybe you would possibly be lumped there because your lyrics are in less of the Nickelback-serious mode?

Xan: A lot of people said that our stuff is kind of novelty, but we don't want to be a novelty band.
Step: you mentioned Moxy Fruvous and they did two albums and died off the face of the planet, I don't want to be a novelty band that dies... like, "oh they're fun" and then gone. I think there's novelty aspects
Xan: Yeah, things performance wise, people love to hear that stuff, people always ask for "Masturbation", "Trikey", or "Let's Jog" those are the kind of novelty songs. But also, when people listen to the CD that Stephen did before I joined it's a lot different. I guess when you're entertaining during a performance that's what they like.
Step: And novelty, even the nature of the word is not lasting, it's novel, it's a fad, but I've written lots of songs.
Xan: We've had the comment that our music's frivolous before
Step: One Girl!
Xan: Well, also my mom too. She's like, I used to write more political stuff, political rap songs and so my mom's like, "ah! That's frivolous what you're doing now". The more that I do it the more I think it's useful. The best comment that we had, we were busking outside of a liquor store and a homeless man came up to us and was like, "you guys are so awesome, I wish I could be you, you guys are spreading happiness." I started crying when he told me that, because at that point we just got to Vancouver and I was starting to doubt, I had just done this move...
Step: We're on the street busking every day for like three hours, because that's as long as we can go considering she can only dance so much, and yeah some days you're just making peanuts and it's like, "what am I doing this for?" You're just waiting for something to happen and we lucked out.

Do you think you lucked out or is it because you're awesome?

Xan: (laughs) Well, we definitely worked hard.
Step: This is after years of working on it in different capacities, I've been writing lots of songs and have been pretty engaged. But this is the first time where it's been five or six months of just going at it
Xan: We don't have real jobs we're just doing music

Are you a DIY band, how?

Step: Definitely
Xan: We don't have anyone working for us
Step: We're organizing our own tour, we're doing our own promotions and making our own connections, posters, we don't like pay some guy to put up posters, we're completely DIY.

To find out more about Trike and to see if they're coming to your city in the near future you can head to their website.