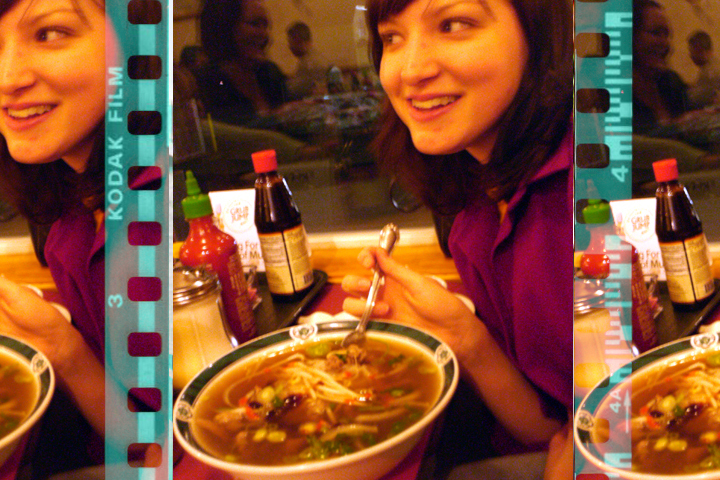 
There are many theories as to what helps relieve hangover symptoms: an aspirin before bed, drinking lots of water, boiled toads with a dash of fairy dust... As for me, I want a big steaming bowl of Pho (pronounced fuh).

Pho is a Vietnamese broth and rice noodle soup, usually made by simmering beef bones, green onions and other spices. I like just the beef noodles and broth, but the traditional soup comes with tripe and tendons as well. The amazing thing about Pho is that while it is hydrating and nutritious, it is also very versatile. You can add various sauces and garnishes which customize the flavor to your liking. The broth can be as spicy or mild as you wish. With each new bowl of Pho you eat, you will be perfecting your special Pho creation, making it really Pho-n to eat (Ha ha.).

x. Sriracha - Commonly referred to as "Hot Cock Sauce" because of the rooster on the front of the bottle. It is made from vinegar, garlic, chili peppers and sugar. It tastes like base American hot sauce.
x. Hoison - Also known as "Plum Sauce." It is made from garlic, vinegar, chili peppers and fermented soy beans. It has a sweet taste similar to what a less intense Teriyaki sauce would taste like.
x. There is also typically a varied selection of hotter hot sauces at your table.

x. Thai Basil Leaves - Tastes like licorice. The leaves are small and the stems are purple.
x. Cilantro - Tastes like citrus. The leaves are green, of broad width, and on a long stem.
x. Bean Sprouts - It is hard to describe the taste of Mung bean sprouts because they don't have a lot of flavor, but it adds a good crunch to the Pho. Long, thin and white.
x. Lime Wedges - Adds a subtle citrus flavor.

One last piece of advice for your Pho experience: Drink as much broth as you can. It's filled with nutrients and is a tasty way to re-hydrate yourself after a long night of drinking. Try not to overdo it with the hot sauce, or the broth might be too spicy to drink.

What's your hangover food of choice?

Tiffany S.
“Most definitely a BLT or sum sort of mega toasted sandwich and a cup of cafitiere coffee

Tiffany S.
“Most definitely a BLT or sum sort of mega toasted sandwich and a cup of cafitiere coffee

bearrrie
“Dude, I'm Viet and I love Pho. I never get tired of it.
There's also a chain of restaurants called WHAT THE PHO?!” 18th October 2008

Joielu
“There's this place in Seaside, CA that serves Pho. The restaurant's name is, get this, "Pho King" - hilarious!” 25th March 2008

Candybat
“I agree with Cinderelly- I love menudo when I have a hangover! The spicier and hotter the better! The broth is a great hangover drink. I know most people think it looks kinda gross but it tastes good.

Candybat
“I agree with cinderelly- I love menudo when I have a hangover!” 24th March 2008

cinderelly
“menudo! but my non-latino friends think it is gross. for me, nothin' is better when you are hung over though! has to have lots of chile and lemon in it too!” 20th March 2008

Jo G.
“a greggs cheese pastie in a buttered roll which also must be from greggs, because they use a particular kind of cheap margarine. Sounds disgusting and it is probably terrible for you, but it is medicinal.” 4th March 2008