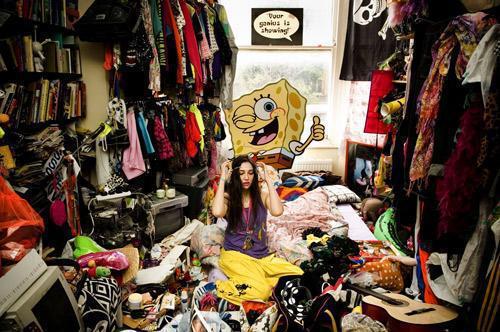 
"I always loved fashion, but in quite a strange way." explains Namalee Bolle, a London fashionista renowned for her over-the-top nu-rave style. "When I was growing up I wanted to be a cartoonist because I liked drawing and was very imaginative. I always liked dressing up and would have these weird obsessions about clothes where I would only wear pink for 3 months and then suddenly I wanted to dress like a 50s rock 'n roller. I guess I really got into fashion when I was about 14 and I started getting scouted by model agents. I didn't want to be a model but then I thought I might like to be a fashion designer."

One of Namalee's many jobs is a 'fashion muse' for fashion design duo Basso & Brooke. "Well being a muse really is like the film Xanadu. My job is to 'inspire' - it sounds ridiculous but that's the truth. I've always been good at making things come alive and having a vision about things. With Basso and Brooke it's my world to make sure the clothes come alive."

"I shop anywhere and everywhere - from Selfridges and Sainsburys to bins and charity shops. Its all about the way you put stuff together - thats the most important statement - juxtaposition. If I had to say my favourite shop though, I would say Kokon To Zai because everything looks like cartoons. I can't sew to save my life. I am good at coming up with ideas for things but my construction is often very messy and frenzied, so it's best if I tell other people what I want rather than make it myself.

"True style is so uncommon these days. Apparently all these celebrities are supposed to be really stylish but I can't see it. True style is inherent - it comes from your soul, not from your stylist. It's about having the balls to stand up and say ' From the bottom of my heart I like this, so Im gonna wear it'. I'm not into style where people get a picture of Patti Smith looking 'cool' and try to imitate it to dishvelled perfection. Patti Smith looked cool because acted like herself."

Namalee goes on to explain the meaning of Nu Rave is and where it all started. "It originated in London in about 2002, at a club called Kashpoint - this weird new performance art club that was started by Matthew Glammorre. The people who went there were the beginnings of the whole new influx in art, fashion and music that you can see today - people like Gareth Pugh, Cassette Playa, Niyi, Patrick Wolf and No Bra all started on this scene. It wasnt called anything at the time but everyone who went knew that it would become something really big because it was so genuinely trying to do something new. It wasn't cool at all - it was the complete antihesis of what was going on in 'style' culture.

Nuke Em All and Circus

I started experimenting with dressing up even more randomly - mixing objects and toys with garments and performing in them here. Later on K-Tron and Warboy started All You Can Eat and Yr mum and Yr dad started Antisocial - these to me were the definitive nu rave clubs that everyone else went on to copy. They were incredible clubs where it was all about mash up style and music - the whole thing was very naive and DIY - its about 'having a go'. The media termed it nu rave and then it became simplified to 'day glo' and 'regurgitated rave music' - which kind of missed the point entirely. It was always and still is about 'mash up culture' and the mixing together of stuff that shouldnt belong together. It's good that the media talked about it though 'cos it made people aware of us."

Aside from being a fashion muse, Namalee also works at Super Super, a fashion magazine that she co-founded. "I wanted somewhere to express myself freely and to report on all the amazing musicians and fashionistas coming out of the London underground scenes that no one was paying attention to. Basically it was the scene that started what the media tagged as 'nu rave' but it started in as early as 2002. Me and SuperSteve could feel that the zeitgeist was changing and we wanted to go with the new thing because it felt natural to us and more familiar than the old way of 90s minimalism and 'coolness'. We previously worked at Sleazenation magazine, Steve was editor and I was fashion editor so we knew our stuff. I felt frustrated and like I was always holding back and compromising myself and my ideas."

New Years Resolution = "To rule the world - and yes I am keeping it haha.."

"[Starting Super Super] was really hard because we had no money at all and everything we have built we made ourselves from pretty much nothing. Me and Steve borrowed about two thousand pounds from our parents and then went out looking for sponsorship and advertising. Sometimes I look back and I don't even know how we got through to this stage. Publishing is no easy task, you have to love it to do it. I still spend 4-5 days in the office around deadline with no sleep, but it's sooo worth it."

On top of her writing and fashion jobs, Namalee is also pursuing a career in music, with an album and single on the way. "It's coming on great. I am working with my long term collaborater Niyi and Rat Scabies (ex-The Damned). I love the idea of the punk legend coming together with us because it made me realise what I knew in my heart - that our music shares the values of punk. Me and Rat have talked fro so long about the similarities - its just that we dont play guitars, we play playstation and keyboards.My first single Namazonia will be out this May and the album, will come out in the Autumn. Niyis first single is coming out on Kitsune this March."

"I'm a really creative person who can't keep still for 5 minutes. I want my performances to hit you from all sides and fashion and music are the best bedfellows ever. Also I'm fed up of people using that 'style without substance' cliche. Of course style can have substance - if you intend it to. There's so much pseudo substance around anyway, too many boring bands called things like 'The Fence' with musicians who only wear brown and say something 'poetic' with a serious face on, but actually dig a little deeper and they've got nothing to say to the world."

"I dont actually know [how I stay on top of everything] because I am the world's most chaotic person. I guess in my head everything is organised and makes sense but to look at how I live, it's hard for others to see the business acumen - ha ha."

You can find out more about Namalee on her MySpace and make sure to check out Super Super too!