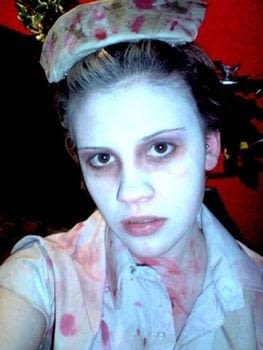 Good and Creepy
I made this for Halloween 09, I was invited to an all night Halloween party, and the next day we we're going to Alton Towers for there last Terror of the towers.

Me and my sis are big Alton Towers fans, we go at least 15 times within a year, and the Halloween fright nights are the best, so we dress up. I wanted something really scary but easy to do, so a Silent hill Nurse was the answer.

I first started with the mask, Paper Mache over a balloon a bit bigger then my head, first with news paper. About 3 layers was the minimum. Leave a small round section at the bottom by the tie uncovered for later.

Once dry I started layers of crepe bandages, the bandages were pre dyed with a coffee and tea mixture overnight and cooked them for 30mins in a warm oven (Please be careful, a warm oven Is an oven just used and then turned off. It should only feel warm to the touch. Keep an eye on them constantly) to give them the used look. I layed them with the same method using wall paper paste I’d apply one layer then wait to dry. I kept going till I was satisfied with the look.

Once the mask was dry I kept the balloon still inflated so I didn't lose the shape. I used the same mixture I used on my dress (Ingredients at bottom) as well as fake blood and red food colouring mixed with corn starch and water. I splatter this on the mask to create the creepy look (I’d recommend outside)

Then pop the balloon once dry. You'll have a creepy balloon shape lol, the first step is to fit it on to your face, you'll have a small hole at the bottom where you didn't paper Mache at the beginning. well now cut round the edges of it to insure its round. Once done cut a slit at what you decide is the back. Using the slit cut a triangle shape hole at the back; make it small at the beginning, then try to get it on. Keep going till you can fit your face inside of the mask.

Next the holes for the eyes mouth and nose. With the head on ask a friend to mark where you'd like them. Cut them out carefully using a craft knife. The mask will look a bit odd so as to make the mask look once again like the real thing, past over the holes with lose bandages, now not crepe but fancy dress bandage, most fancy dress stores or joke shop do them for about £2 a pack you'll only need the one. Treat it like you have the other bandages dye and splatter. Now paste over in the same direction as the bandages already on the mask.

This is important so as you can see only put one layer, that’s 1. Any more and you won't be able to see out of it. The bandage is thin and easy-ish to see through, but two layers makes it even harder.

The next step was the nurse’s hat, I made two of these since one was to be glued to the mask, and the other was for me to wear round Alton tower. Since you’re not allowed to wear masks in the park, zombie make-up and a nurse’s hat in slicked back hair was the result, so two hats.

First I did a template in cardboard, checked against my head for the general shape, craved fan, with a lip. To make it curve just make two slits down two sides and glue back into place once curved.

Once I got one figured I made two more out of card board. Now I brought myself these beige leggings to go under the dress since it’s so short, I cut the legs of and hemmed them. I used the excess to cover the hats I just used fabric glue. Then splatter and glue on the mask, or glue hair grips on.

Now the dress, I used a large men’s shirt which I just tacked in at the back to fit better. I also removed the pocket on the front and ripped the sleeves off. Once all the sowing was out of the way, I dyed the shirt in coffee and tea with the bandages over night then placed it in a warm oven to brown off(As mentioned before be careful)
The splatter with fake blood, food colouring mixture and the secret recipe. I did the same to my shoes they were an old pair of plimsolls that were muddy so I teaed, coffeed, and fake blooded them.

The last parts are finishing touches such as the gloves, these are just normal plastic disposable gloves treated as the other fabrics but as an extra paint was splashed on these to make the look last longer.

The veins are blue eyeliner and black eyeliner. I basically took ages sitting there drawing them on myself. and since it was October in England I had two pairs of tights on. I just drew on to them once they were on, then dripped fake blood down myself. Keep some fake blood and eyeliner with you at the party, convention or day out to top off the entire look.

Then add water till you like the consistency, I like it pasty so you get little bits in it. You also smell really nice XD. Oh the amounts are about what I used but add more or take some away to your own liking, but cinnamon is brilliant at the old blood look.

Well I hoped you like my way of making this outfit; I found it quick and easy

I made my mask using glue and newspaper. Yours turned out awesome!

Anyway, you reminded me of my almost-white leggings. I think they look pretty 'sick and pale' like a nurse and with your technique, you may easily put the blood and veins there to look more real!

Three cheers for the nurse!!!
Reply