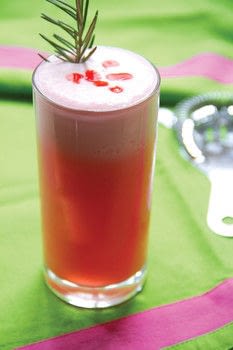 Savory Cocktails
Rhubarb, rhubarb, rhubarb—that’s not me muttering to myself, but it is fun to say. It’s especially fun when you say Rhubarb Rosemary Flip. I bet its creator, Carol Donovan, is fun, too—with her résumé of gigs singing classical music all over Chicago. I imagine her singing behind the bar when she developed this drink for Chicago restaurant The Hearty Boys.

The heart of this drink is a rhubarb and rosemary syrup, a ruby-red handmade elixir that packs a sweet and sour punch. I’m sure you know rhubarb—that tart red stalk usually associated with dessert pies and cobblers. It’s a charmingly “old-fashioned” ingredient that has somehow resisted mass-market appeal, but Carol’s syrup brings it into the modern age. It’s terrific when paired with the botanicals in gin.

Tip
Does the idea of an egg in your cocktail make you a bit queasy? Well, relax. A raw egg white helps unify flavors; what it doesn’t do is add an eggy taste or create a slimy texture. In fact, a properly shaken egg white creates a soft, silky foam that rises to the top of the cocktail.

Still, many people raise their eyebrows at the thought of raw eggs. Raw eggs have been somewhat vilified, and while it’s true that raw eggs carry some risk of salmonella, with properly stored fresh eggs the risk is very, very low. Pasteurized eggs remove the threat entirely. But if you’re still not sure, all I can say is that you’re really missing out. 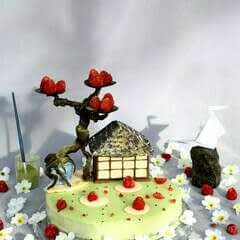