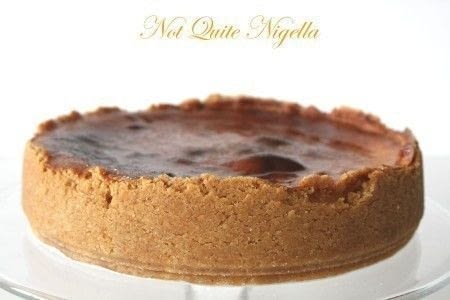 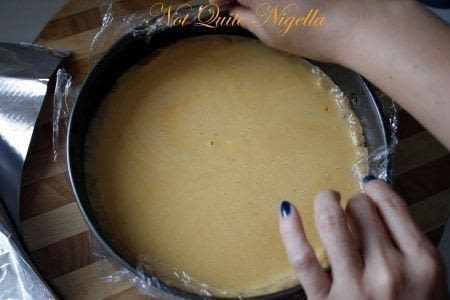 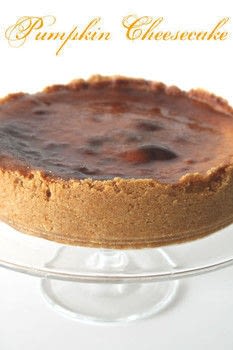 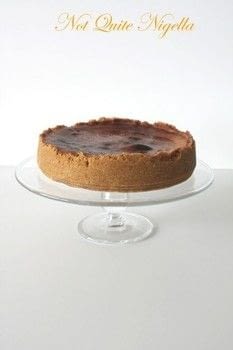 Heavenly Pumpkin cheesecake
Please, please don’t roll your eyes. I know cheesecake isn’t the most exciting or novel dessert, certainly not as exciting as a macaron or a Zumbo creation but allow me to plead my case. The first time I tried this was at my recent Halloween party where my guest Queen Viv, a fantastic cook, brought this cheesecake over. We were stuffed to the gills with all sorts of “horrific” foods yet someone piped up that there was a cheesecake in the kitchen and that they wanted to try a slice (ok that was me). And a few of us were cut small slender slices of this pale orange hued cheesecake and sank our teeth (or in the case of some, fangs) into this delicate and airily light cheesecake.

Soon after hearing our moans and requests for seconds, suddenly everyone else was getting a slice and enjoying it thoroughly. There was a hint of cinnamon and a touch of lemon to the pumpkin flavoured cheesecake which was not too pumpkiny but just right.

It is from Nigella’s Feast, a book that I have fallen in love with all over again after disliking it for years as the first 7 items I tried from there were either average or a disaster. The only issue with this recipe is that it makes a little too much filling for the crust even with my modification (her original recipe calls for 750g of cream cheese!). Nigella says to push the crumbs onto the base of a 19cms diameter springform tin but I found that that way, the base was incredibly thick so I pushed the crumbs up to the side. You could either do the same as I did and then bake the remaining into cupcakes (I had an extra packet of biscuits so I just made more of the base) or bake it in a ramekin for a pot of pudding. Or you could bake it in a 23cms diameter springform and just press the crumbs into the base and that way you won’t have any leftover. It all depends what you want and have in the cupboard really.

I cooked mine for the requisite time but found that was too long, I think after 1 hour 20 minutes check it to see whether it’s done and you will get the correctly hued cheesecake shade. Don’t let the water bath turn you off but if you just can’t deal with it, you don’t need to. Queen Viv’s plate was too large to fit into a baking tray so she baked it as it was and it was perfectly light. And with the cheesecake itself, this light, dreamy confection, do I rest my case Your Honour.

GreenLeaf · Essex, England, GB · 52 projects 30th April 2010
Wow how did I miss this? Thanks for posting, anthing pumpkin is delic!
Reply

SparrowFae · Carthage, Missouri, US · 41 projects 26th October 2009
I was totally looking for a pumpkin cheesecake recipe, because I have 2 whole pie pumpkins I want to use for something unusual. The other one I'm going to use for a curry dish.
Reply