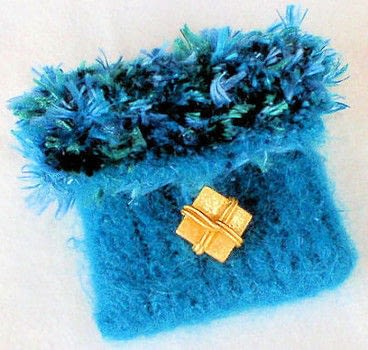 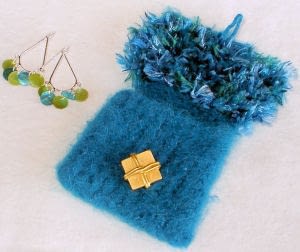 Then inspiration struck ... and in less than 2 hours I had whipped out a “Glitzy Flapped Gift Bag” on my round blue Knifty Knitter loom, felted it, and stitched on a decorative button.

Voila! A very special package for the earrings.

You’ll find the gift bags are quick and easy to make, use up small stash bits trimmed with inexpensive notions, and best of all, require very little finishing work.

The envelope-style “Glitzy Flapped” bag is knit in the round, the pocket portion bound off halfway – only the bottom needs to be stitched shut. What could be easier?

1. For Main Color, choose a yarn that is at least 50% wool or other animal fiber for felting. For Contrasting Color, choose any lightweight novelty yarn you like: eyelash, fun fur, feather boa, even ribbon!

2. Remember that all yarns felt differently. If you don’t like surprises, knit a swatch of the yarns you intend to use. Take measurements before and after felting, and adjust my pattern according to the finished size you want. (Your felted swatches can serve as coasters, or Catnip Mice!)

Dragoness · 28 projects 7th June 2011
when you say "wool wash" in felting, do you mean the cycle on the washing machine? I was thinking of doing this, but I'm not sure if dishwashing liquid or shampoo would mess up the washing machine (which is a side door btw)
Reply

You should submit this to instructables Summer Yarn Contest to win an awesome prize from Lion Brand Yarn!