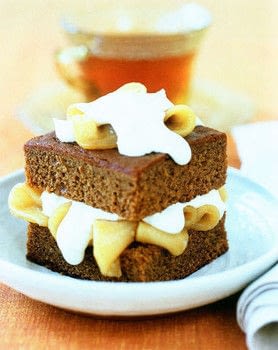 Classic Stars Desserts by Emily Luchetti
Of all the recipes in Stars Desserts and Four Star Desserts, this is the one I make the most often, and also the one people tell me they make again and again. Dessert doesn’t get much better than this.

Planning Ahead
The gingerbread may be made a day in advance. Wrap in plastic wrap and store at room temperature. The apples may be cooked 2 days in advance, covered, and refrigerated. Reheat before serving.

October 17th, 2010
This looks and sounds so amazingly delicious!
Reply