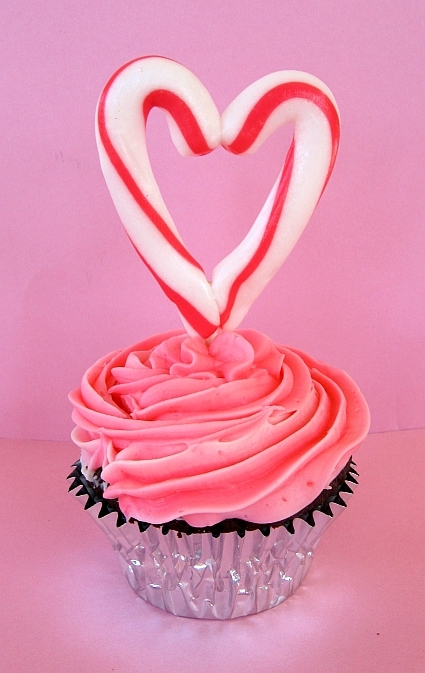 Here's a really cute tutorial for melting candy canes in to a heart shaped cake topper.

Check out the how-to from Skip To My Lou. 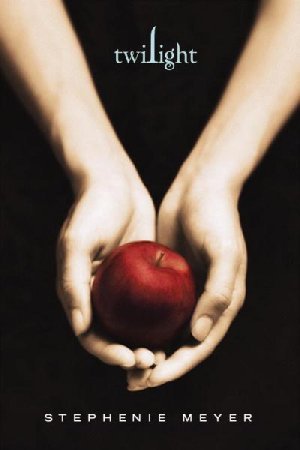 If you haven’t heard of this book by now then I do have to question where you have been. A phenomenal success across the globe, this book has been topping the best selling charts for weeks now, and with the impending release of the motion picture (12.12.08 in the UK), it is bound to stay there. The first in the four part Twilight series, Twilight tells the story of teenager Isabella Swan and her romance with the enigmatic, Edward Cullen. And did we mention that Edward is a vampire?

When Bella moves to the small rainy town of Forks to live with her dad she does so with a heavy heart. Knowing that she will struggle to make friends, it seems as though on her very first day she makes an enemy: the astonishingly handsome Edward, seems repulsed by her mere presence.

Inevitably the mysterious stranger draws Bella in and before she knows it, she has fallen for him, though she unable to admit it, even to herself. When he saves her life, she is astounded by his speed and strength, though he denies anything untoward. As their relationship grows, so does Bella’s curiosity and during a trip to visit family friends she learns of old legends and rumours about Edward’s family.

When Bella confronts Edward about being a vampire, he admits it, though explains that he and his family only ever drink animal blood and would never hurt humans. However by this time Bella and Edward are irrevocably in love, and despite the danger to Bella’s life (for Edward could end it at any point), they cannot live without each other.

Their happy relationship is jeopardised when another coven of vampires search out Edward and his family. When they discover Bella, one of their number decides to hunt her for sport. In the tense scenes that follow, we learn just how horrifying vampires can be.

Firstly I would like to say how much this book surprised me. Pitched as a teen novel, I have to admit I wasn’t expecting much and to be honest the first few chapters had me convinced I wouldn’t like the book. Bella seems to be a fairly run of the mill, whiney teenage character with no distinct personality. But then Edward comes along; he steals our heart as well as Bella’s. His character is automatically interesting to us, he is intense and there is sense of mystery about him. Helped largely by the fact that this story is written in the first-person, we cant help but find ourselves falling a little in love with Edward. When the relationship between Edward and Bella develops we feel ourselves experiencing the same excitement that we would if it was our own relationship. We feel the thrill of being noticed by a boy we were infatuated by. This element of the novel gave me butterflies, my heart raced with anticipation and I became completely enthralled. It is a situation we all have, in our lives experienced, enabling us to relate to it, and get caught up not only in the story but also in our own memories.

To be honest with you, from an outside perspective the story is a little weak; the action at the end feels as though it was manufactured only in order to add some excitement to the plot. It is almost as though Meyer could not just allow herself to write a pure love-story, as she says herself in one of the later novels “It wouldn't be real horror without action." It seems that she really wanted to write a horror-story about vampires, but ended up with a superbly constructed love-story. Having said that, the action is engaging enough for us to want to read on and I finished the book rather quickly, at which point I went straight out and got the next three.

Overall I really enjoyed this novel. The love-story is spectacularly spellbinding and superbly written, taking into account the target audience and remembering that really us girls have never grown up! I am unashamedly in love with Edward Cullen, and am on my look out for a man of such passion of my own (though the vampire thing would be rather annoying). This book is fun and allows us a nostalgic escapism, making it an extremely compelling read. 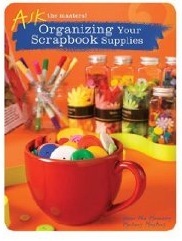 Being a crafter you acquire a lot of supplies, and Ask the masters! Organizing Your Scrapbook Supplies is a book filled with ideas for getting all of those bits and pieces organized.

The book explores the workshops of a number of scrapbook artists to discover the ways in which they store and organize their supplies. As well as ideas for scrapbookers, there are lots of ideas that general crafters can use too - store your stickers neatly in a ring binger, wrap your ribbons around playing cards and colour coordinate your paper using individual boxes. There are even ideas for crafting on the go, organizing digital supplies, and tips for creating beautiful scrapbook pages. 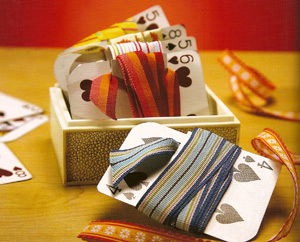 Filled with neat storage inspiration and real life practical solutions, this book is a must have for anyone who hoards creative clutter. 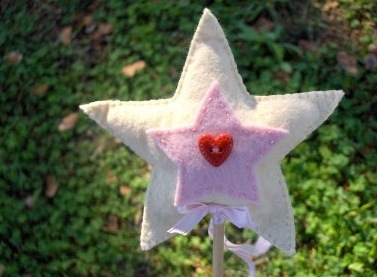 Surely every crafter needs her own DIY magical fairy wand?!

Check out the how-to from Zakkalife. 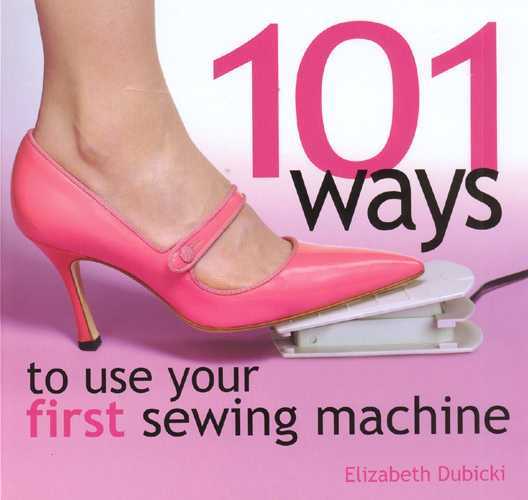 The book is a comprehensive introduction to tools, materials, stitches and the various things and tricks you can perform with your machine, with detailed guides for working with tricky fabrics like leather and denim. As well as teaching skills, the book is filled with how-to's for embellishing clothing and making projects for your home. 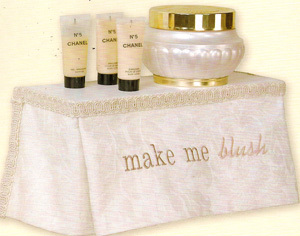 Brighten up your bathroom with a Ribbon Shower Curtain, add a bit of decadence to your bed with a homemade Tent Canopy, or display your cosmetics on a unique and professional Make Me Blush Shelf Cover. Start conquering your fears and show your machine who's seamstress - just think about how much time you'll save not having to hand sew everything. 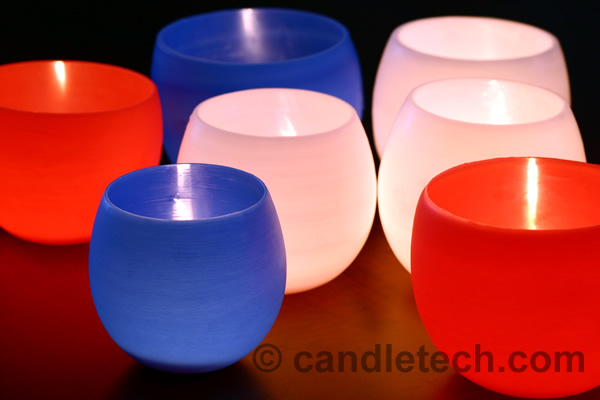 Check out the how-to from Candle Tech. 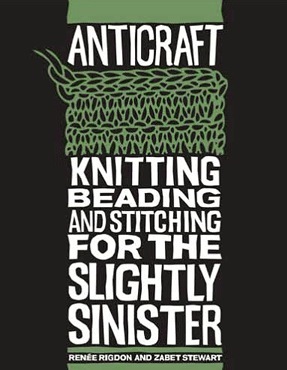 Venture in to the dark side of crafting with the Anticraft book for "Knitting, beading and stitching for the slightly sinister". Renee Rigdon and Zabet Stewart have put together a book filled with a wide range of crafts to inspire any anticrafter. Dress up with a pair of gorgeous knitted Belladonna Sleeves, accessorize with a beautiful Lily Victorian lace edge necklace, cross-stitch some Graffiti wall art, knit a slightly disgusting Immaculate Heart, or flaunt your assets with an impressive and sexy Forever Bound duct tape corset. 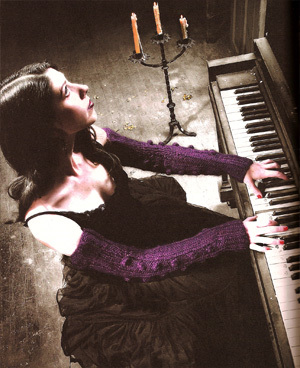 Each project is accompanied by song recommendations and there are lots of extra tit bits, including comic strips and a guide to tapping in to your dark side. This book goes to show that crafting isn't all about fluffy bunnies and baby booties. 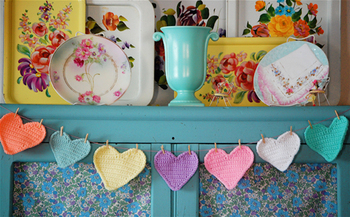 This sweet heart garland looks adorable and would make a great gift for Valentine's day.

Check out the crochet pattern from Bella Dia. 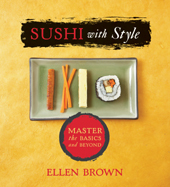 Ellen Brown's Sushi with Style is a book that aims to show you that there is a lot more to sushi than raw fish. Covering all the basics, this is a nice guide for beginners. One of the main elements of sushi making is the preparation and this book will teach you everything you need to know about preparing ingredients and working with different food and tools.

Filled with recipes, which are accompanied by step-by-step diagrams, you can learn to make different styles of hand rolls, Tempura and even accompaniments, like Miso Soup. The most unique part of this book are the dessert sushi recipes, featuring a range of sushi-style pieces, replacing the fish for sweet ingredients like chocolate and fruit. 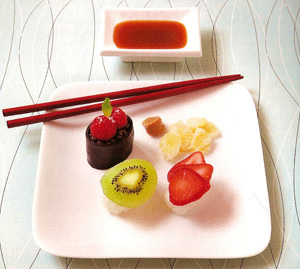 Sushi with Style is a comprehensive guide to everything you need to know, so if you've ever wanted to make your own sushi, this book will have you chopping, cooking and rolling like an expert.

You can pick up a copy of the book from The GMC Group or Amazon now.

Check out a sample project from the book, Nigiri Zushi. 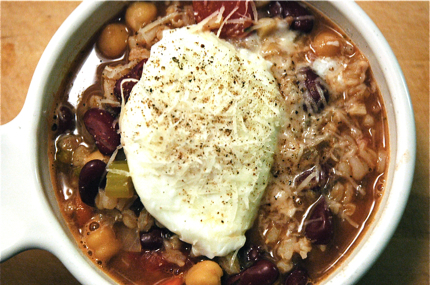 This bean and farro soup looks like the perfect dish for a cold winter day.

Check out the recipe from Pink of Perfection.