We chat to London rockers, the Sohodolls. 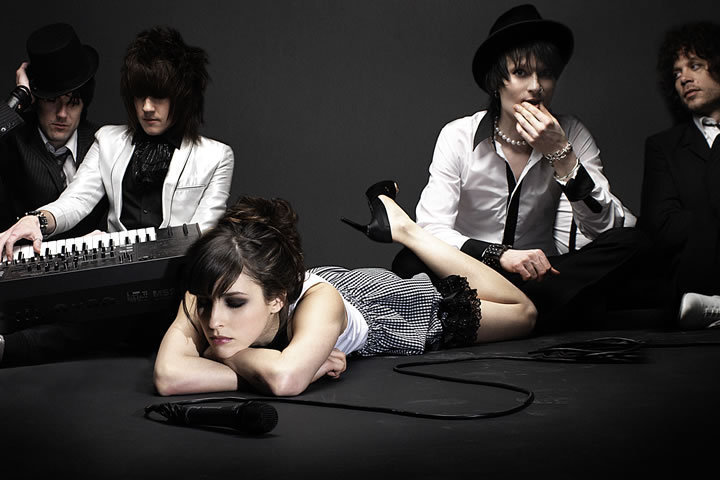 How did you meet?
Maya met Toni through a friend who recommended him as a brilliant guitarist plus someone who had a van. Toni then recruited Matt and Paul through Myspace and Maya found Weston on Myspace.

How would you describe your sound?
70s rock n roll fused with 70s/80s synth pop.

Has being in the band given you a chance to travel and where do you enjoy visiting?
Yes. We enjoy visiting everywhere! Italy is great for the food, France is great for the style they have, Germany's great for a mixture of both. The continent is always a pleasure. Spain is mad, they're a bit nuts in Barcelona and Madrid is rather posh. We always try to take in the sights wherever we go but it's difficult getting Maya up in the mornings, she's a sleep-aholic. LA was lots of fun as there was an abundance of vegetarian food. This band is more about food, sleep and rock n roll than it is about the sex and the drugs.

What was it like to play at the Playboy Mansion?
We played at the Moscow mansion. It was a fun and well-organised event. Rather amusing to play to an audience whose two front rows consisted of bunny girls! The hospitality in Russia is par excellence and so's the vodka.

Where are your favorite places to hang out in London?
Soho. Saint James' Park. Waterloo Bridge. Tower Bridge and the south bank by night.

You've got great style. Who are your fashion influences and where do you pick up your clothes?
Thanks! We pick up our clothes from second hand shops and get the basics like shoes from Camden or TopShop. We don't have any fixed fashion influences - it's whatever takes our fancy, be it an 18th century portrait of an old sailor to seeing a torn-out page of French Vogue from the 1960s.

Do any of the band make their own clothes or do any kinds of craft?
Yes! Toni often takes in his own trousers or shirts as they're rarely made fitted enough for his build. Weston bags favours off is mother (and Maya is eagerly waiting for an extension of such a favour..) and we also make our own jewellery out of odd bits from the children's section in junk shops.

Any fashion tips you'd like to share?
Yes. There is never an excuse to wear a tracksuit if you don't intend to do sport. Other than that one should always be comfortable in what he/she/it is wearing.

Do you like to keep a DIY ethic?
Yes we try to.

How will you be celebrating Christmas and New Year?
Quietly. 2007 has been a very busy year for us so we're staying put in England!

Find out more about the Sohodolls, or find out when they're touring near you, on their website.