Tim Burton's The Nightmare Before Christmas. 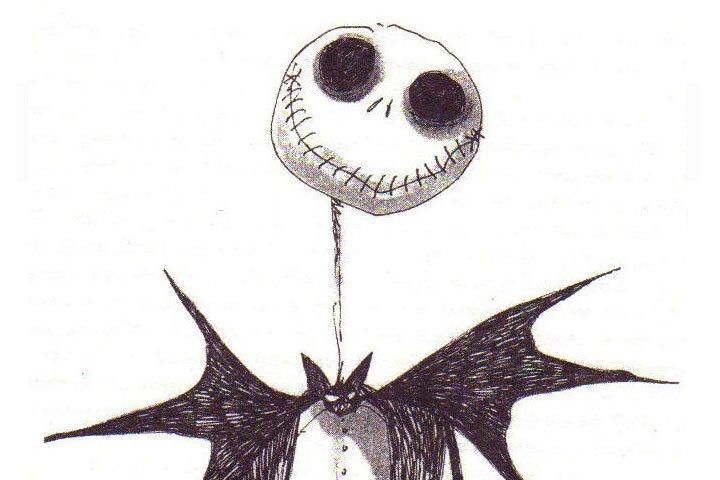 With Christmas just around the corner, and television and cinema full to brimming with the usual festive fare, Tim Burton's The Nightmare Before Christmas still proves to be a unique and masterful re-imagining of the classic Christmas tale.

As popular now as at its release in the early nineties Nightmare was a collaboration between Burton, director Henry Selick and composer Danny Elfman and broke new ground with its exquisite use of stop-motion animation, adding something all together more alternative to the Disney stable from which it emerged. Burton came to the idea after observing how one holiday season soon replaces the other in American culture and the magic they have to transform reality for a day.

"A lot of people and critics don't get that there is an emotion underneath these weird stupid-looking things."

Nightmare was originally conceived by Burton as a poem and a series of drawings focusing on Jack Skellington, the Pumpkin King of Halloween Town who growing weary with the sounds of screams and ghoulish goings-on of his own town falls in love with the concept of Christmas and hatches a plan to kidnap 'Sandy Claws' and take his place. Enlisting the help of the spooky residents of Halloween Town to recreate the spirit of Christmas, doomed hero Jack instead unleashes a whole host of monsters and the macabre on the poor unsuspecting children of the world. Jack's ill-conceived desire to be Santa is cut short when his coffin sleigh is shot down by the military that misunderstand his intentions and brand him a monstrous impostor. It is through his experiences that Jack gains acceptance of his role as king of Halloween and finds a kindred spirit in rag doll Sally.

Burton's story is beautifully realised as almost a living illustration in stop-motion animation a painstaking approach that took three years to complete and displays many of the central tenants of Burton's enigmatic style such as his use of colour (red, black and slimy green), black and white stripes, stitching, skeletons, dogs, pumpkins and a haunted and much misunderstood central character.

The character of Jack has rapidly become an icon that not only represents a shorthand for what is essentially 'Burtonesque' but also embodies the notion of the alternative figure, misfit or anti-hero in society. Perhaps understandable due to its close relationship with Disney Nightmare and its characters have become part of an identifiable brand that still continues to sell to both Burton fans and those who are drawn to the imagery of the film as an emblem of difference.

Burton himself has commented on the popularity of Nightmare and its cult appeal (In Burton on Burton): "People will come up and they'll have a little picture of Jack with them. It's funny because sometimes when things connect with people, maybe not a large group, but with some it's really wonderful to me..." He continues: "A lot of people and critics don't get that there is an emotion underneath these weird stupid-looking things." It is the emotion, the obsessive passion of both Burton and his character Jack that drives Nightmare giving it a real depth and dark humour that critics and fans still continue to respond to.

Official The Nightmare Before Christmas Merchandise available from Forbidden Planet.

Burton was still just beginning to carve out what is now a successful reputation as the outsider's director/artist in Hollywood at the time Nightmare was coming to fruition. These days, over fifteen years on from Nightmare, he still continues to weave haunting tales that affect and assault the senses in equal measure with his visceral visual style and dark, edgy mood. This month marks a major retrospective of Tim Burton's work at the BFI Southbank with film screenings spanning his career to date along with the display of his sketches and costumes from his latest offering Sweeney Todd designed by Burton and Colleen Atwood.

I attended a talk and screening session run by Burton fan and biographer Mark Salisbury at the BFI that that featured clips from all of Burton's films (including Nightmare) as well as his early filmmaking efforts as a teenager and during his time at California Institute of the Arts. What came across most was the idea that Tim Burton is himself essentially a fan-boy, in love with monster movies like Frankenstein and shooting Super 8 movies in glorious black and white on the weekends, spoofing horror and producing something fresh and original - his own take on the world as an outsider to the suburban America he emerged from. Also apparent was Burton's sense of humour, something often lurking beneath the more immediate darkness of the worlds he creates. In Nightmare, as in his other films, Burton can be seen to be exorcising personal demons from the sense of displacement he always felt growing up, introverted and solitary. Jack Skellington is himself a monster, a spindly-legged skeleton who is by far the scariest thing in Halloween Town but who feels love and loss in a very human way. Nightmare is very much an alternative fairy tale dreamed up by a man inspired by Ray Harryhausen's Jason and the Argonauts and the 'Creature Features' he was exposed to as a child as he recounts to Mark Salisbury in Burton on Burton: "I felt most monsters were basically misperceived, they usually had much more heartfelt souls than the human characters around them".

It is this soul that permeates The Nightmare Before Christmas, in the songs composed by Elfman and the characters conceived by Burton. It is the plight of Sally who is literally coming apart at the seams and Jack who yearns to recapture the feeling Christmas awakens in him that continues to strike such a chord with fans, including me.

The Nightmare Before Christmas is being screened at the BFI Southbank: Fri 21 Dec & Sat 22 Dec. Visit www.bfi.org.uk for further details.