A review of everyone's favourite dark movie, The Craft. 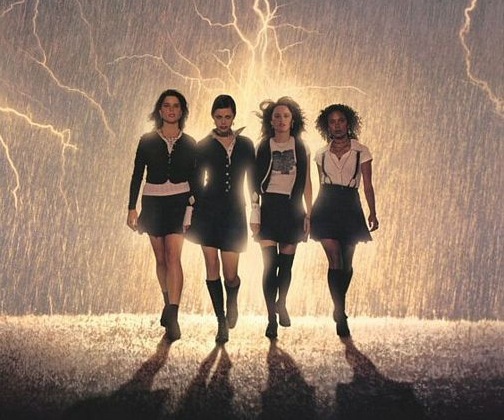 
Ok, so if like me you love black lipstick, fake plastic bats and the opportunity for a bit of dress-up that Halloween annually brings but spend most of your evening cowering in your bedroom trying to avoid the slasher-fest that television inevitably becomes then fear not! Here is my film suggestion for the faint of heart - it may be suitably dark but won't have you sleeping with the lights on:

Cast your mind back to the mid nineties, a simpler time when MTV was predominant and high school was the focus of a whole gamut of films and television shows. One of these films was fundamental to my sixteen year old self back then in showing an attractive package of 'the misfit' in society - The Craft. Here were pretty, interesting young women who displayed acerbic wit and intelligence, dressed head to toe in gothic apparel and getting into magic-related scrapes whilst trying to survive high-school, and each other. The original blueprint for later, successful, supernatural-themed films and television shows like Charmed, The Craft never purported to be an intellectual Oscar winner with its simple format: take four attractive female cast members, a kick-ass MTV-sponsored soundtrack and a few blue-screen special effects to tell a straightforward story of the desire for belonging and power during adolescence. To me the film is the Lost Boys of my generation.

The Craft is a cautionary tale of the perils of falling in with the wrong crowd and the moral that our actions will always have consequences, good and bad. New girl at school, Sarah's desire to fit in and belong, leads her to befriend a trio of wannabee Wiccans and she soon becomes entangled in a world of witchcraft and wish-fulfillment. What seems like harmless fun at first (queue fluffy scenes of sunny meadows, butterflies and levitation) takes a more disturbing turn as the newfound power Sarah brings to the coven is used to makes changes in the girls' lives.

Sarah (Robin Tunney) casts a love spell on school heart-throb Chris (Skeet Ulrich) making him obsessed with her so that she can humiliate him in return for his treatment of girls at the school. Rochelle (Rachel True) is the subject of racist bullying and so the coven uses a spell to exact revenge on the worst culprit, a suitably nasty Christine Taylor. Bonnie (Neve Campbell), her body covered in burn scars, applies a healing spell to take away her affliction and renew her confidence. Nancy (The fantastically psychotic Fairuza Balk) uses her power to remove her mother's sleazy boyfriend from their lives and to change their fortunes in an attempt to no longer be 'trailer-trash'. At first each spell works well but as they progress they become increasingly too successful with Chris becoming dangerously obsessed and attempting to rape Sarah, Rochelle's tormenter becoming disfigured and humiliated to the point of cruelty, Bonnie's recovered confidence changing her personality negatively and although Nancy manages to instate her and her alcoholic mother in a fancy apartment she only succeeds in transplanting the misery of her life to a new, more sophisticated, setting.

As you might expect, this surge of power begins to corrupt the girls, especially the more unstable Nancy who becomes determined to take all of the supernatural power they have accessed into herself. Sarah becomes increasingly uneasy with the effect the magic is having and so tries to remove herself from the coven, facing intimidation and torment from the other three. Sarah is a lost soul, new in town, without a support network and with the loss of her mother and a suicide attempt in her past she is any easy target for her friends-turned-foes. They use magic to convince her that her father has died in a plane-crash, play on her phobias of snakes and insects to scare her and ultimately intend to kill her in the guise of another suicide attempt. Luckily for Sarah, it turns out her mother was a pretty powerful witch too (phew!) and so she is able to call on this power and her own inner strength to overcome Nancy and the others.

So good once more overcomes evil and the world is put to rights as through Sarah's exertion of power the spells the coven have cast undo themselves and Nancy is rendered harmless (albeit deranged in a mental asylum). Sarah's white magic has triumphed over the increasingly black magic of the other three and she is left with renewed confidence and strength having been through, and survived, this ordeal.

For me The Craft is about more than just glossy all-American magical hijinks, it is about belonging, powerlessness and bullying. It tentatively hints at the feminist ideal of 'sisterhood' which ultimately implodes and the strength that can be gained from relationships between women, such as Sarah being aided by the Wiccan shop-owner. The film also represents the growing culture of young women dabbling in the dark arts as a means of escapism and as a way to feel empowered. More than anything else the film is just plain cool. Its special effects don't appear too outdated ten years on, its horror aspects are still unsettling and the lead female characters are all suitably three dimensional. Plus there is the thumping soundtrack supplied by bands like Letters to Cleo, Sponge, Portishead, Elastica and that iconic Smiths cover 'How Soon is Now?' by Love Spit Love. So I urge you to revisit The Craft this Halloween. If nothing else, it will make you long for a time when black knee socks a mini skirt and braces were du rigour!