We chat with Rob Reger, the man behind the Strange. 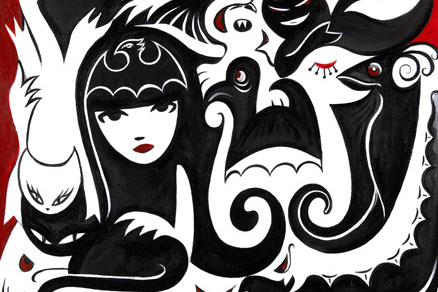 
"Emily has become more and more complex with various levels of back story and snippets into her mythology. She is becoming more of a real person every day. She used to have 3 eyes, but one was amputated- it stuck out to much" explains creator Rob Reger. First drawn in 1996, the now cult cartoon star, started life as a freebie promotional sticker handed out at gigs and stores. "The original drawing was done for Santa Cruz skateboards and I made it into a shirt graphic, I then made more shirts taking inspiration from that and lots of rock n roll and pop culture material with a dark twist to it. I am influenced by nearly everything cool I see, hear, or breathe. But mainly by my other artist friends and musicians."

('In Your Dreams' and 'Things With Wings', original Emily Strange artwork.)


"It's been a roller coaster! A long ride with lots of fun people and lots of ups and downs. Both can be fun with the right people around you!" Reger considers whether he saw her fame coming, "It's all happened little by little, and with lots of hard work, so the payoff is nice to see. I think I saw the potential very early on with this character, and put the systems in place to capture my vision for it all as broad as possible.

Reger explains that the motivation behind using a combination of live action and animation for the upcomming film was to "give Emily a "real" person feel, while still capturing her in the classic animated cartoon we all know and love... We are still developing it over at 20th Century Fox, and although it's a slower process than I anticipated, I am learning a lot about hollywood!"

Appearing on everything from guitars to underwear, Emily has a reputation as a feminist icon. "I think it's great. We all need someone reminding us from time to time to stand up for ourselves. Even us boys can learn a bit from the strange one." On reflection of where Ms. Strange would be in another 16 years, Reger answered "I guess she'll be 30 by then. Maybe pregnant with siamese twins! You know, the typical I guess - amusement parks, space shuttles, private fun house islands..."

If you haven't read our interview with Emily Strange, then you can also find it in this issue. For more updates, check out the official Emily Strange website. (Artwork courtesy of Cosmic Debris).