We chat with the creator of Gloom Cookie and Nightmares & Fairytales to see what makes her tick. 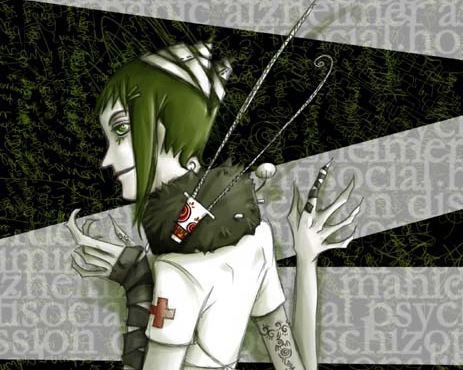 At what age dig you become interested in comic book and story-writing and do you remember what your first creation was?
I was 28 when I wrote the "Lex & Max" story for GloomCookie, that was in 1998 when Ted and I were self-publishing, it was picked up by SLG shortly after and was printed in the summer of 1999. I hadn't considered writing comics before then, though I had friends in the industry since I was a teenager - at the time I was more interested in acting and singing, though I did fancy the idea of writing books for children.

Do you often base the characters in your stories on people you know, or base the stories on your real life?
I did in GloomCookie quite often. These days it's subtler. I think most writers bring something of themselves and their experiences to the stories they write. There are times when it's a deliberate choice and in others it's completely subconscious. It can manifest in many ways, drawing upon personal experience, as one would, say, in acting for example, to resonate with the character on a deeper level, or giving a character one of your own experiences as a means to process it yourself or make it more relatable to the reader. I've noticed a lot of my current work is dealing with grief. Since my sister took her own life just over a year ago my work is either directly addressing my feelings surrounding her death, finding ways of preserving her memory, or processing the feelings loss. One of the stories I'm writing now for Disney, based on the Wicked Queen from Snow White, called Fairest of All is about how grief and loss can close off your heart and isolate you from the ones you love. That is rout I think I could have easily taken, but I decided to take a more challenging path. But it was important to me to explore that alternate path through my writing. Writing about the queen's grief, the emotional and physical pain that comes with that sort of suffering and profound loss was taken directly from my own experiences. And of course there are times when the story is not based in any experience whatsoever, but is perhaps inspired by an interest, (historical or otherwise) but I do feel that is still bringing something of yourself to the writing subtly, by virtue of sharing an interest, or exploring that interest through fiction.

(Pages from the comics Nightmares & Fairytales and Gloom Cookie)


Did you have a doll similar to Annabelle when you were growing up?
No, but I did have this amazing Little Red Ridding Hood doll. She really frightened me because when you turned her over she became the grandmother, but if you removed the grandmother's bonnet, the other side of her head was the wolf's head. Nothing really frightened me as a child, but this thing really freaked me out. My mom had to hide her in the closet, and I would sneak into her room just so I could look at this doll and get scared. My dad loved horror films while I was growing up. One my fondest childhood memories was being able to stay up to watch Twilight Zone with my dad, probably one of the reasons I didn't frighten easily when I was younger. If anything inspired Annabelle I think it was Rod Serling from the Twilight Zone. Though her role isn't entirely passive like Rod's I like to think of Annabelle as homage to one of my favorite storytellers when I was growing up.

Where do you look, or what do you do, if you are suffering from writer's block and need inspiration?
More times than not it's just a matter of something needing to shift in my brain. I find inspiration in my favorite books, people, films, music, and that space right before sleep.

How do you decide which of your comics to work on at a particular time?
I make a schedule for myself based on the publisher's deadlines. There are times when I am motivated to work on something more than another, and if I am really inspired I will take advantage of that inspiration. I got ahead of schedule (by three issues) recently on Nightmares & Fairy Tales because I found the characters in the story I was writing so engaging I couldn't bring myself to just write the issue that was due to the artist for illustration, I had to see the entire story through - the next thing I knew I had written three issues. Luckily it didn't interfere with a conflicting deadline, however I think either way I would have written those three issues back to back because I was enjoying the characters and their story so well. It really comes down to the deadline and what I'm inspired to write.

(Artwork of Gloom Cookie cast and Annabelle from Nightmares & Fairytales )

Out of the comics you do, do you have a favourite one to work on?
I usually favor whatever it is I'm writing at the time. So if I had to chose one, right now, I would say Hell's Cafe.

Are you working on any other projects at the moment?
I am. Aside from Nightmares & Fairy Tales I am working on Enchanted, Hell's Cafe, Fairest of All, The Gorgon and Teratopia. Enchanted is a series, illustrated by Vincent Batignole and published with SLG Publishing. The story is about a young woman named Bella. She chooses to live in her own world, surrounded by books and oddities. She is hiding from her destiny in her Aunt's dusty, old bookshop in the French Quarter, reading about demons, ghosts and mystical creatures' attempting to avoid the day she will have to venture out in the world and be confronted by such creatures. That is until her aunt gives her a little nudge out the door, sending her off to be the unwilling guardian of young twins, a girl and a boy, named Kitty & Julian: children who have mysterious fates of their own, who need Bella's protection, so they can fulfill their own destiny. It will be Bella's task to use her knowledge and the gifts her aunt has taught her to reveal the secret mystery behind these children's future and to keep them safe from harm's way. I am still developing Hell's Cafe but I can tell you a bit about it. The story takes place in New Orleans, in the late 1800's and is about Theodora, a young woman who joins a writer's group [comprised of three men: Gabriel, Michael & Seth] who frequent the Hell's Cafe to drink absinthe and share story ideas. Theodora soon starts to fear the characters in the horror stories they've created have manifested in the real world and may be responsible for the latest wave of violence in the French Quarter. The Gorgon is a short film I am writing for End of Sky Productions. The story I've written is very much inspired by my love of silent film, with beautifully stark blacks, whites and greys, with color being gradually introduced as the main character becomes inspired by his muse, an enchanting gorgon. The story takes a horrific turn when inspiration turns to obsession with ghastly results. Fairest of All is a novel I'm writing for Disney Press about the Wicked Queen from Snow White. The editor I'm working with at Disney is amazing. He's giving me a lot of freedom to work with this character, to bring her life and give her a voice of her own. I plan to explore her past, her relationship with the man in the mirror, and her motivations for attempting to kill Snow White. Fairest of All will be released October 2008.

The artwork in your comics varies greatly with each change of artist. How do you decide who to work with and what do you look for in an artist?
When I write a story I have an esthetic and vision of how I would like it to look in mind and I find an artist that best realize that vision and bring something of themselves into the story as well. Each story, story arc or series is different and therefore requires an different look. Nightmares & Fairy Tales for example: the stories I was telling with FSc were written to her strengths as an artists (at least after the first couple of issues) they were fanciful, dreamy, imaginative and cute, we made a good paring for those stories and she was a pleasure to work with - but when it came to telling 1140 Rue Royale I had another look in mind, something stark, contrasting, remote and moody was in order for that story and Crab Scrambly was perfect. A period piece like that needed another look altogether and I thought Crab's woodcut influences would give the story the richness and texture I envisioned, just as FSc's dreamscape fanciful style was perfect for the fairytale issues we did together. Since then my scriptwriting style has changed and I had a desire to tell fairytales in a modern setting with a hint of reality, yet I wanted to preserve that sense of cuteness and romance from the beginning of the series, so that is why I chose Camilla. She really resonates with the way I write my scripts, and she is solid storyteller in her own right. We have managed to bring a fanciful fairytale nature to the world we live in with the issues we have been working on together. I am really going to miss working with Camilla on this series, as we are approaching our last issues of Nightmares & Fairy Tales.

Have you ever been tempted to illustrate your own comics?
No. Never. I can't draw.

You can find out more about Serena Valentino on her website or add her as a friend onmyspace. (Illustrations by Crab Scrambly, Vincent Batignole, FSc and Camilla d'Errico)