Meet the new calendar girls from Meow Records as they reminisce over Halloween's past. 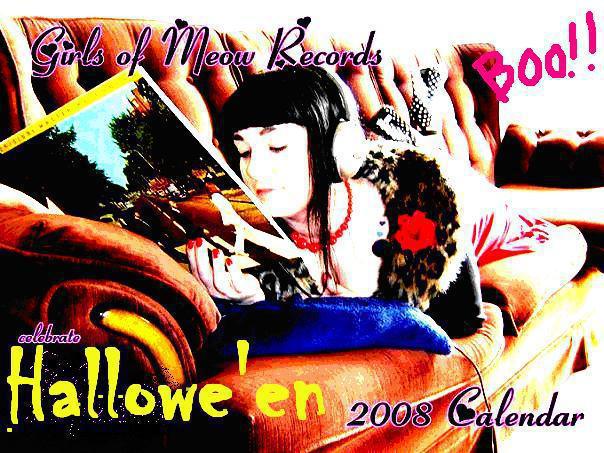 
Around Hallowe'en last year, a young woman (who has many amazing attributes which could include being a dedicated campus/community radio volunteer, writer for Canada's leading authority on all things music, Earshot!, and local scene supporter) bundled into her knitted blue scarf for fall and began executing her plan to open a independent record store called Meow Records. Barely a year old, Meow Records has become a sort of local mecca for music-lovers, vinyl junkies, and small time designers and artists alike. Bryndis (aka. Miss Meow) is a reigning fan of Hallowe'en and both a diy supporter and crafty cat herself. Aside from bringing Sub Pop recording artist, Chad VanGaalen, to town for a private party and the Prince George Folk Fest, Bryndis has dedicated the utmost of her energy giving credit and luster to 12 other crafty cats (including myself) and asked them to highlight their diy talents and love of music in a not-so-naughty "Girls of Meow Records Calendar".

I thought that this year, for my first ever piece for Snippets, I would highlight the magical wonders of Meow Records and uncover the Calendar Girls' Hallowe'en costumes of lore. I surveyed the Girls on what their favourite costume was, what inspired it, what it was made of (and how they made it), and just how they managed to stay warm under their costumes (given that we live in the "North" of British Columbia, Canada, and that around Hallowe'en it could dip to below 0*C). Below, two of the Calendar Girls, Miss Meow herself and Miss May, Allana Stuart Giesbrecht, let you in on their little Hallowe'en Secrets!

What was your favourite Hallowe'en Costume?
My favourite costume is definitely when my sweetheart and I dressed up like very old, formerly wealthy, British Couple. We each found outfits that were at one time very elegant, but with age had become worn out and gross. He found a tux with rips in it, and I wore my grad dress from Grade 12 (I felt pretty good that it still fit). I put on EVERY single piece of jewelry that I owned and put that grey spray hair paint in my hair. It was fun, but I had a hard time keeping up the accent all night.

What was your costume made of?
The dress was black satin, and I even had this gross old fake mink stole to wear with it.

What inspired that specific Hallowe'en costume?
We both aspire to be a wealthy old belligerent British couple. showing up drunk to events and being mean, but nobody can do anything about it because we're so rich we could buy and sell them. Unfortunately, neither of us are British, but when you have that kind of money you can fake it and people can't say shit.

How did you stay warm under your costume?
We drank A LOT that night. And we were pretty much indoors the whole time. We hosted the party . We even made my black cat (Zappa) dress up like a butler, don't forget, we were supposed to be a CRAZY eccentric couple.

How do you see your costume and your memory of it fitting into a larger world view about Hallowe'en and/or nostalgia?
For me, Hallowe'en is fun. I don't believe in a god of any kind, so I don't view it as an unholy day, althought it might be even funner if I did.

Allana Stuart Giesbrecht is an Associate Producer of Day Break North on CBC Radio 1 and hails from somewhere even colder than Prince George, Thunder Bay, Ontario.

What was your favourite costume for Hallowe'en?
My favourite was a Cinderella costume I wore as a child! I can't remember exactly how old I was, but probably around 7 or 8.

What was it made of?
My Mom made the costume for me. It was made out of white eyelet material, and a blue satiny sash. Also a blue satiny headband.

What inspired that specific Hallowe'en costume?
I was a big fan of Walt Disney's Cinderella at the time.

If the costume was from your youth, what do you remember about yourself at that time?
I was shy, slightly chubby, and a bit awkward! The costume made me feel beautiful!

How did you stay warm under your costume?
My mom made it large enough to fit my snowsuit underneat. Lame, but very necessary for October in Thunder Bay.

How do you see your costume and your memory of it fitting into a larger worldview about Hallowe'en and/or nostalgia?
It reminds me that for children, Hallowe'en should be about fun and play and making dreams come true!

To find out more about the Meow Records Calendar and the other Girls or to hear more about next year's theme, Horror!, please check out their website.

Diandra Jurkic-Walls is a freelance writer, diy-er, and academic activist living in Prince George, BC, where she is working on her MA in gender studies and sticking-it-to-the-man!