Comic books aren't just for boys anymore. Here's a look at the women behind the business. 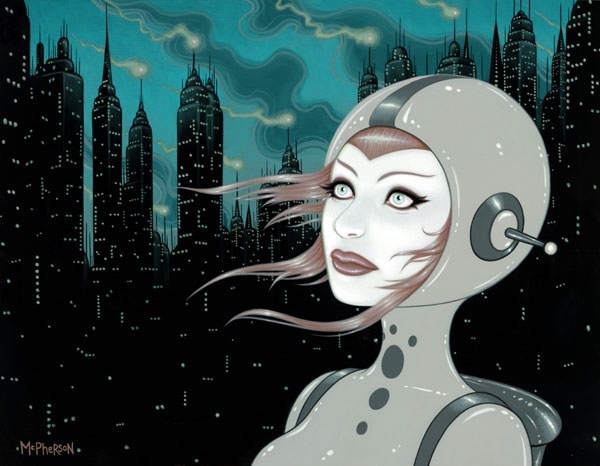 It is a really exciting time to be a comic book fan right now as more than ever before female artists and writers are producing smart, empowering and exquisite comic books that appeal to a new generation of young women in the UK and abroad. Led by the dazzling talents of writer Serena Valentino, illustrator FSc and creative visionaries such as Tara McPherson, Dame Darcy and a number of female artists producing shojo manga for publisher Tokyopop, there is a growing sense of a 'gothic' aesthetic that portrays the complex nature of modern female experience. The theme that constantly runs through the work of these women is the conflict between 'cute' or innocent young women and the darker side of life explored through gothic overtones. Female characters in their work tend to be visually represented with all the characteristics of traditional femininity only to possess talents, powers or personalities that challenge any assumption of innocence or weakness.

Serena Valentino in particular has received widespread acclaim for both her Gloom Cookie and Nightmares and Fairy Tales series which are full of strong, feisty, adorable female characters whose experiences subvert notions of the traditional love story and that of the 'happily ever after' fairytale. In Gloom Cookie Valentino deals with issues of loss, violence, obsession, self harm, identity and reinvention using deceptively simple stories and cute characters to much darker effect. In her collaboration with the artist FSc on Nightmares Valentino draws on a number of traditional fairytales like Little Red Riding Hood and Beauty and the Beast subverting them so that the real monsters are seen to be our own human nature. Valentino and FSc have garnered legions of fans through their ability to address very real issues outside of the confines of traditional storytelling and through the beautiful visual immediacy of FSc's illustration. FSc creates a gothic world that is at once pretty and appealing and full of nightmarish violence and tragedy. Her work has a heartbreaking quality that really resonates off the page, as Tommy Kovac comments in his foreword to Nightmares "FSc is an artist with a vision. She creates a surprising, cute world I'd love to live in, if it weren't so dangerous and lined with sharp teeth." The main character of Annabel in Nightmares reflects this conflict as she is a cute as a button doll that acts as the catalyst for death, violence or dramatic change for the young women who come into contact with her.

Other artists who work within the comic book medium and utilise a gothic aesthetic in a similar ways are the Japanese artists Mitsukazu Mihara and Ai Yazawa who have produced the manga series' Doll and Paradise Kiss respectively. Doll is a fantastic selection of short stories that present a world in which human-like androids exist as maids, lovers and companions to humans and what this relationship between android 'Dolls' and humans can reveal about human frailty and experience. The characters within Doll and Paradise Kiss alike are often dressed in the 'Gothic Lolita' street fashions which are increasingly popular in Japan amongst young women as an expression of alternative identity. The 'Gothic Lolita' style is a quite obvious fusion of the Goth look (black lace, bats and crucifixes) with the baby doll look where there is an emphasis on appearing child-like or literally like a doll. This fashion is often portrayed within manga as it reflects both the desire for youthfulness and the idealistic innocence of childhood with darker gothic aspects of adulthood. More recently this style has been exemplified in Princess Ai (with which Ai Yazawa is creatively involved) co-created by rock star Courtney Love as 'gothic shogo' aimed again at young women and intended to be reflective of Love's own life. This latest Tokyopop project shows the growing appeal of both shogo manga and this gothic aesthetic as in crosses over into mainstream consciousness. This aesthetic is also used within Dame Darcy's surreal gothic dreamscapes in Meat Cake and her own fashions are clearly inspired by a Victorian gothic tradition in a similar vein.

The artist Tara McPherson has also leant her own gothic style of painting to a number of Vertigo comic books, illustrating covers for The Witching and Thessaly: Witch for Hire. McPherson's iconic style also borrows from this duality between beautiful almost idealised depictions of young women and a gothic violence or bite that some have described as 'sweetly creepy'. McPherson's artwork seeks to create empowering female characters (for a mainly female readership) in the same way that Valentino does and both depict the relationships between young women in their work and how an individual gains a sense of acceptance or belonging from these friendships. In Valentino's work it is in the 'Girl Chat' segments of Gloom Cookie where the central female characters Lex, Chrys and Lyndie come together to support one another through the otherworldly goings on around them as a light hearted rest bite to the violence and in McPherson's covers for The Witching it is in her depiction of the coven of young women.

I feel that the work of these women is important as it creates a medium of expression that young women can relate to during the often painful experiences of adolescence as they attempt to reconcile their identity as it evolves from child to adult. It is the work of all of these phenomenal women that inspires me to keep writing, to continue drawing and to above all to keep dreaming of gothic landscapes and deceptively cute little dolls.