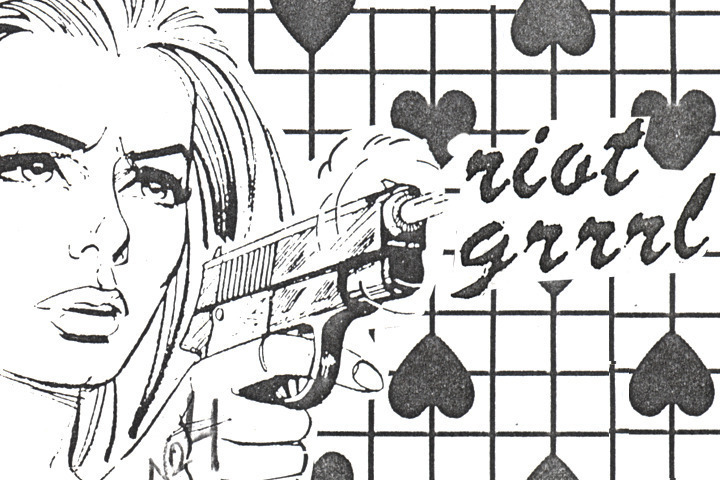 
Riot Grrrl was the movement I always wish I'd got to experience first hand. It was a huge movement in the '90s and there's no doubt in my mind that many readers of Snippets know about it, but if any movement deserves to be talked about and continued, I think this is it. 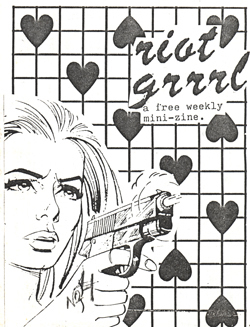 "It was about - it was about trying to do something that women could enjoy just as much as men."

There are many versions of how the movement started, but most people would agree that the band attributed with starting up Riot Grrrl was Bikini Kill. Starting out with a free zine with the same name, they later became a band and were into creating more female-focussed gigs by encouraging the boys who wanted to mosh and dance violently to head to the back, while the girls could enjoy the music at the front if they wanted. As with any feminist movement, they were labelled sexist towards men, but that wasn't what it was about - it was about trying to do something that women could enjoy just as much as men.

The zines carried on from the punk ethos of the '70s and the college idea of freedom of speech. Cutting and pasting together pieces of photos and literature was the original form of what we now have in zines such as our very own Snippets - but before the internet was really used, it was important to have something that could be reproduced, photocopied and passed around to get the message out. It was never about making money but about spreading the word, and helping girls to come together. And also, importantly, about advertising girl punk rock bands, which were hardly seen in major music magazines - and if they were, were normally insulted or at best, classed as "good for girls."

The bands grouped together, and there seemed to be much less competition between the bands than often happens now. They were all fighting for the same cause. They wanted to talk about the issues that women go through but were never allowed to talk about; like childhood abuse, rape, abortions and equal pay issues. They could talk about lesbianism, but in a way that wasn't designed to just attract men - real love between two women, which was either unspoken or still considered "just a phase."

Riot Grrrl has taken on many forms, and although it is largely associated with punk rock music, anyone who believes in the Riot Grrrl manifesto, whether they realise it or not. Singers like Beth Ditto have come out as saying they support the movement - Ditto said that Riot Grrrl helped her to become a whole person. Other artists and bands which seem to fit into the movement include Amanda Palmer, PJ Harvey and Yeah Yeah Yeahs. My "Awesome Women" playlist contains all three, alongside Sleater-Kinney, Vivian Girls, Lunachicks and more. Not many people would come out as saying they're Riot Grrrl - any more than people tend to announce that they're feminist. It's not about declaring it as a publicity stunt, it's about being it and getting across the ideas in your music.

Seeing girls in the rock business doesn't happen all that often, even now - of course they exist, but usually as lead singers or bassists. These are seen as the "acceptable" places for women to have power, but the drums and electric guitars - the instruments that are seen to be gritty and difficult - are reserved for the men. The movement also revolutionised the idea of a female musician who didn't have to be beautiful or thin, just talented. Even now in the rock industry there are so few female musicians who are not conventionally attractive, when in history male singers such as Steve Tyler, Axl Rose and Sting were seen as sex icons despite not being commonly accepted as attractive. In many metal bands, the attractiveness of a male lead singer means nothing, but Christina Scabbia will be criticised if she puts on a little weight or takes an unflattering photo. 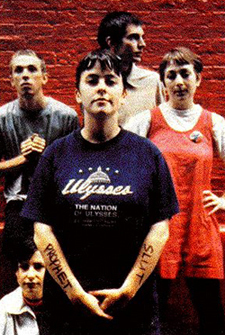 I think one of the greatest parts of the movement was the girls' acceptance of what people thought of them - they said - I know you think I'm a b*tch, so I'm going to write it on my arm, and often wrote conflicting messages on their arms, such as the famous picture of Huggy Bear in which lead singer Niki Elliot has written "Slut" on one arm, and "Prophet"on the other. Other than that, there was no distinctive style for Riot Grrrl - no way to dress like one - which meant it couldn't be corrupted by capitalism as easily as, say, Punk culture.

Riot Grrrl brought feminism into the public eye in a way that was less academic and less structured - instead of only finding a voice in studying feminism as a subject, or by participating in marches, girls were able to kick and scream about what really mattered to them. It gave girls - normal girls - a voice, and that voice wasn't what a lot of people wanted to hear.

A re-emergence seems to be happening now - the DIY ethic that Riot Grrrl helped bring back with third-wave feminism has stuck longer than anyone had predicted, and with films like Whip It!, we get to see natural women a little easier than before. So for all of those who thought that Riot Grrrl was just a phase, just some angry girls kicking off - you were very much mistaken.

Knittin' Kitten
“Well I mentioned Bikini Kill =P and didn't deliberately miss out Le Tigre, just that it would have taken up too much space to simply list all riot grrrl bands.” 10th August 2010

nadya c.
“what about le tigre and bikini kill! both crucial bands to the riot grrrl movement!” 10th August 2010

jasmyn b.
“As a woman who likes to mosh as well i find that last comment true. When i mosh they either don't hit me back cause i'm a girl or they take that chance to try and "scare"me away by being extremely rough and target me to either yes try to pull my clothes down or hit me more than necessarily hard. Ive seen guys plotting to hit certain girls to get them to leave the pit. Like groups of guys rushing one or two girls. AND ive had guys stand behind me and wait for the pit to start then they would push each other into me so they could feel my bum. So THANK YOU! ” 11th July 2010

Knittin' Kitten
“Oh yeah, not saying women don't mosh, just more that it was given a choice. And also, from my experience, men are really nasty to women who mosh. They either won't push them back or they use it as an excuse to pull their clothes down. I reckon moshing should be at the back anyway - leave the space at the front for people who want to watch.” 8th June 2010

AgitProp.
“"they later became a band and were into creating more female-focussed gigs by encouraging the boys who wanted to mosh and dance violently to head to the back, while the girls could enjoy the music at the front if they wanted."